The Munk debate that never was

Shannon Gormley: In this nasty, empty campaign, how would a debate on foreign policy have gone? Safe to say, pretty badly. 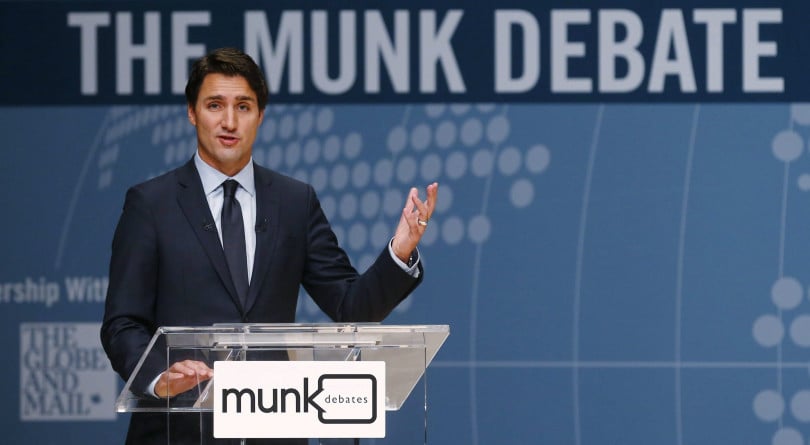 Trudeau participates in the Munk Debate on foreign policy in Toronto, on Sept. 28, 2015 (THE CANADIAN PRESS/POOL-Mark Blinch)

This election, unlike the last, did not feature a Munk Leaders Debate on foreign policy. The following is a transcript of the debate that was never held.

Moderator: Hello, good evening, and welcome to all of you watching at home. We’re here tonight with the leaders of the federal parties to debate whether or not they care to debate foreign policy.

As you know, the Munk Debates’ mandate is to sponsor thought-provoking discussion of important public issues featuring prominent Americans, and tonight is no exception: Mr. Andrew Scheer, thank you for being with us tonight. Beside Mr. Scheer, a man who is in fact Canadian but wishes he wasn’t: Mr. Yves-Francois Blanchet, leader of the Bloc Quebecois. Next to him, Mr. Justin Trudeau, a man who wears many hats: Leader of the Liberal party, Prime Minister of Canada, plus the occasional turban, pagri or dastar. Sharing a podium, a glass of water and the required carbon offsets are the leaders of the Greens and the NDP: Ms. Elizabeth May and Mr. Jagmeet Singh. And last, because Steve Bannon was unavailable, Maxime Bernier, leader of the People’s Party of Canada.

Trudeau: That’s a great question, and I’m glad you asked me. It’s vital that we choose forward, by which I mean, keep things exactly as they are. With me in power.

Moderator: Ok. Mr. Trudeau, you like to boast that “Canada is back.” With arms deals with the Saudis, the mishandling of India, and a shallow commitment to peacekeeping, in what sense is Canada back?

Trudeau: I have had the privilege—and I do acknowledge my privilege—of having many inclusive dialogues with our international partners, of every race, gender, creed or sexual orientation: whether that’s a woman or a self-appointed male feminist ally, whether that’s a democracy or a brutal dictatorship that imprisons Muslims and gays in camps—Liberal foreign policy embraces everything and everyone.

Moderator: Speaking of China: Mr. Scheer, you’ve criticized Mr. Trudeau for expressing admiration for the “basic dictatorship” of China. What, then, is Conservative policy on China?

Scheer: Our China policy is excellent, and we have lots it.

Moderator: But what is it?

May: Look, can we stop confusing the real issue here? If we don’t stop climate change, China will never even get the chance to rule us all.

Singh:  Unlike the Greens, the NDP will never work with the Conservatives to give China the chance to rule us all.

Moderator: Let’s move on. The Liberal government has been criticized for letting Canada’s foreign aid languish. How would you approach foreign aid differently, Mr. Scheer?

Scheer: We’d cut it by 25 per cent. [Turns to audience, points at it.] It’s time for you to get ahead of starving African children.

Trudeau: Just like Doug Ford, Mr. Scheer doesn’t care that the middle class of starving African children is shrinking.  We care deeply about the Third World and those working hard to join it. And that’s why a Liberal government would give every starving middle-class family in Africa a camping subsidy.

Singh: The NDP policy on NATO is clear. Canada should leave Venezuela alone.

May:  Unlike the NDP, the Green Party thinks Canada should leave Venezuela alone more.

Moderator: I’m sorry to interrupt, but I’ve just received notice that our online audience poll has been tampered with by Russian hackers. How would you deal with these types of growing cyber threats, Mr. Trudeau?

Trudeau: The Internet is sexist. We need to make sure it’s led by strong, capable women who do as I say.

Scheer: The mainstream Internet has an obvious Liberal bias.

Bernier: [Looks up from smartphone.] Pardonez-moi, does anyone know how Trump would use “cuckspiracy” in a sentence?

Scheer: [Faces camera.]  You’re on your own, Max. The Conservative Party of Canada has nothing in common with the man  it nearly elected  leader.

Moderator: Nevertheless, Mr. Scheer, some have  accused you of pandering to the same populist, anti-immigrant sentiment sweeping the Western world. How do you feel about Brexit, and about Trump?

Scheer: I supported Brexit before it was cool, and I’m still supporting it now that it’s a disaster. As for President Trump—

Trudeau [in blackface]: “Did someone say President? I’m President Obama, and I’m here to endorse my main man, Justin.”

Trudeau: I now realize that was wrong. I was blinded by layers of privilege and greasepaint.

Moderator: Mr. Scheer, how would you rate the United Nations, on a scale of bad to very bad?

Scheer: Look, I don’t want to get into those kinds of nitty gritty policy details. I promise Canadians this though: Under a Conservative government Canada will rebuild our military so that the brave men and women in our Armed Forces have the equipment they need to stand up to the ruthless bureaucrats at multilateral institutions.

Moderator: Well, that’s all the time we have. Please join us at next year’s Munk Debate, where we’ll debate the resolution: “The future of the world is a pit of fire ruled by a loose coalition of cyborg-incels and emus.” Arguing on the pro-side, Mr. Rudy Guliani, pending his receipt of a prison day pass, and on the maybe-side, Twitter user @Ivan392709.

Until then, don’t forget to vote for tonight’s debaters in our Kremlin-controlled online poll and, if you have time, also in this very important election.