The national unity question that most of Canada is ignoring

Tom Mulcair: The debate around language and individual rights is in full flight in Quebec, pushed by separatist and nationalist thinkers who are scoring into an open net 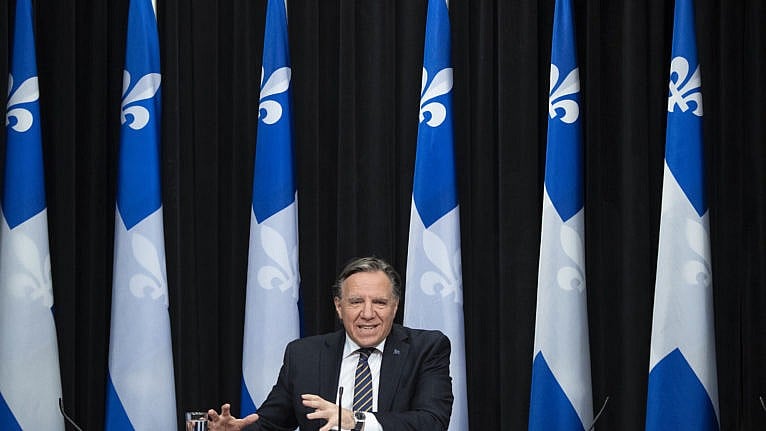 Legault reacts to talks he had with Trudeau and provincial premiers on Dec. 10, 2020 at the legislature in Quebec City (CP/Jacques Boissinot)

There will be so many year-enders on the pandemic, I figured that for those who have a nostalgic longing for the past, some vintage talk of ‘National Unity’ might stir the heartstrings…

It may indeed seem oddly disconnected to talk about anything else, but quietly and without ever giving up, Premier François Legault and key members of his government are pursuing a policy he candidly laid out in an interview just before his election in 2018.

This was one of those set-piece, pre-election interviews where the head of each party is asked similar questions. On the issue of National Unity, Legault was transparent: separation in one fell swoop hasn’t worked, so he was going to take a step-by-step approach. He’d concentrate on culture, language and immigration. The goal was a constitutional amendment guaranteeing Quebec unique authority in those areas of jurisdiction.

If all went well, the predictable refusal would be the ultimate grievance that broke the caribou’s back!

To those of us who’ve spent our lives fighting for individual rights in Quebec, the last couple of years have been difficult. Legault’s Bill 21 openly discriminates against religious minorities in general and Muslim women in particular.

In the meantime, Muslim women who were recruited in countries of the Maghreb to come to Quebec as teachers, are still being denied their right to enter that profession if they wear a head scarf. Their rights will continue to be denied for years as the Court of Appeal, then the Supreme Court, look at the case. The Federal government has the authority to refer directly to the Supreme Court and thus avoid those delays, but Justin Trudeau has refused to do that for fear of ruffling feathers in La Belle Province.

The public debate around Bill 21 exposes a rift in Canadian society on these issues that is rarely analysed. Legault has massive popular support while, across Canada, municipalities and provincial political figures have overtly opposed Bill 21. Many view this as just another example of oft-perceived closed-mindedness, the subtext being that Quebecers are less tolerant of difference.

It’s more complicated than that. These positions are mainstream in France and even European human rights tribunals have maintained bans on religious symbols that clearly target Muslims.

These views, couching the debate as being about secularism of government, are now being pushed strongly by separatist and nationalist thinkers and opinion leaders. They see that major dividing point as being a key to hastening the direct or indirect breakaway of Quebec from Canada. It’s in full flight here in Quebec and yet it’s going largely under the radar in the rest of Canada.

During the deliberations of the Quebec Court of Appeal, it was revealed that then Chief Justice Nicole Duval Hesler was to give a speech at the respected Lord Reading Law Society. That  group had filed a brief opposing Bill 21. An aspiring separatist leader had filed an official complaint and Duval Hesler cancelled her speech.

This is the type of huge social issue that calls out for public discussion,  not cancellation. The vacuum in the current federal government is a real source of concern as there is little structured response being articulated on these views.

In the run-up to the next level of court challenges, former Parti Québécois Leader Jean-Francois Lisée is already softening the target, warning that “Trudeauist” judges will remove hard-fought gains for women’s rights and the separation of Church and State if Bill 21 is declared unconstitutional.

That “Trudeauism” becomes a way to describe judges who would put individual rights above collective rights is no small irony given Justin Trudeau’s refusal to defend rights in this case. The Trudeau in question is of course Pierre Trudeau who is still vilified in nationalist circles for imposing the Charter of Rights. The Trudeauism in question is the horror of multiculturalism, pilloried for being the cause of a loss of a specific  cultural identity for Québécois. Multiculturaliste is an insult. It is slung at anyone who buys into the notion that Canada is indeed bilingual but not bi-cultural. Multiculturalism is decried as a way of denying Quebec’s historical place in the Canadian mosaic.

The Liberals used to know how to speak to both Quebec and Canadian cultural identities. There are no articulate voices in the current government in Ottawa capable of providing an equally emotional and thoughtful counter-argument. The whole skating rink is being left to the opponents of individual rights and of multiculturalism and they’re scoring into an empty net.

Veteran essayist Denise Bombardier summed up this prevailing view in a piece she authored after visiting a culturally diverse school. She was shocked that the students felt that all religions could be seen as being on an even footing. She singles out Muslims and explains that much is being lost with a generation that believes individual rights are as important as collective rights. She argues that a head scarf isn’t just a piece of cloth, it’s a symbol of oppression that can be banned as the new CAQ government was then proposing to do.

Mathieu Bock-Côté, my colleague and frequent opponent on LCN’s political debate show La Joute is one of the best known voices of his generation pushing this anti-multiculturalism agenda. Francois Legault says that Bock-Côté is one of his favourite authors.

On the immigration front, a recent story in La Presse said it all: a young Mexican man, with specific skills much needed by his Quebec employer who had recruited him, was being threatened with expulsion. He’d receive 499/600 in his French test and the passing mark is 500!

It is indeed on the language front that things have been moving the most rapidly.

When Montréal  Liberal MP Emmanuella Lambropoulos questioned whether French was declining in her city she was shamed by Trudeau cabinet minister Mélanie Joly. These are big subjects for debate, but don’t expect one any time soon from Jolie or Trudeau. Nearly two-thirds of Quebecers are concerned about the state of the French language in the metropolis and Trudeau’s organizers were terrified that even raising questions about the issue could come back and haunt them in the next campaign. Lambropoulos was thrown under the bus and off the Official Languages Committee.

Even the language of Post-secondary education has once again become an issue with the Parti Quebecois calling for the rollback of funding for English-language colleges and universities.  A large chorus of voices is even seeking to tell young adults in which language they are allowed to study, hoping to restrict access to those colleges to “historic Anglos”, a community once again feeling squeezed in its own province.

Unsure of his own footing in these often complex files, Justin Trudeau’s reflex has been to imitate the steps of his opponents. One such issue is the application of the language guarantees of Quebec’s Charter of the French Language (Bill 101) to federally-regulated businesses. Refusing to leave that particular dance floor to Erin O’Toole who has openly expressed his support for the measure, Trudeau is stumbling into something for which he has little experience or expertise. The result could be a pratfall.

At stake, for example,  is the right of workers in Quebec to receive their instructions from their employers in French, something that’s easy to agree with. That has been guaranteed by Bill 101 to every employee in Quebec since 1977, except where their employer is federally-regulated. Many businesses that fall under Federal jurisdiction, like chartered banks, have wisely chosen to apply Bill 101 even though they have not been legally required to do so. That still leaves tens of thousands of Québécois employees without that right and that is something  Trudeau has promised to change.

The tricky part is that what’s being called for is the full application of Bill 101, with its complex rules on francisation programs and the like, to also be applied federally. Those pushing for this also want Quebec to be in charge. Trudeau says he’ll use the Official Languages Act to keep this under federal jurisdiction. That is perhaps a wise political move, but it is also one that will provoke a strong reaction from those who wanted the whole nine yards.

The “asymmetrical” application of the Official Languages Act will also prove complicated as French-language minorities outside of Quebec will wonder why federally-regulated businesses in their provinces aren’t similarly bound. Those businesses themselves, such as ports, railways and airports and related companies will no doubt have a lot to say about the practical workings of such a plan. It’s complicated and once again, the Feds have very little institutional knowledge to deal with it adequately.

Against this backdrop of the weighty legal and historical challenges facing our complex country, it’s always good to end with a smile. You may have missed it but Bloc Québécois Leader Yves-François Blanchet came up with his own plan to combat store owners who dare to use the much-maligned bilingual Bonjour-hi greeting with their customers. He hatched a plan to have representatives of his Party go to the businesses on Montreal’s main shopping street, Sainte-Catherine, and try to convince them to say Bonjour-Ho instead! You can’t make this stuff up. Sure hope Santa brought him a…bilingual Urban Dictionary for Christmas!