Opinion: The PCs were expected to sweep Ontario's election—but now, polls show the NDP only growing its lead. Funny what Doug Ford's lack of platform can do 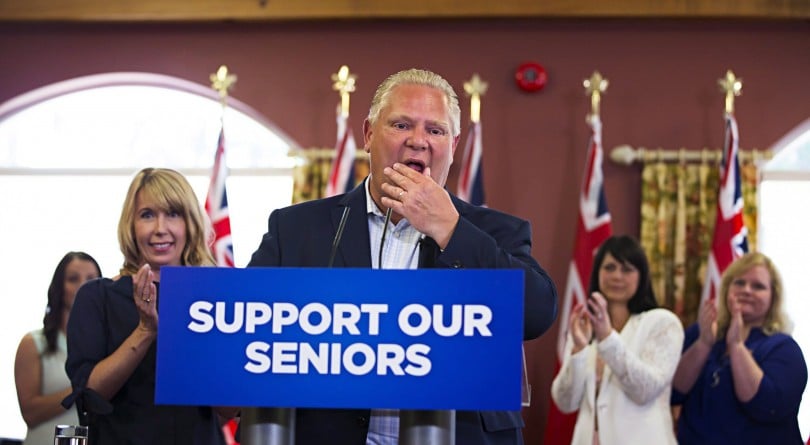 A few months ago, the Ontario Progressive Conservatives were flying.

The party was flogging its platform for change, the well-received “People’s Guarantee.” Patrick Brown, the PCs’ young (albeit untested) leader, was starting to make a name for himself. Twenty-point poll leads were a thing. The hated Liberals were—finally—on their way out.

What a difference a Doug Ford makes.

Kathleen Wynne might still be heading for the exit, but the release Tuesday of a new Maclean’s-Pollara poll showing a growing NDP lead in the wake of the final leaders’ debate—NDP 43, PC 32, LIB 17—won’t do anything to ease the dyspepsia in Ford’s ranks. The PCs are fearing the worst—and it’s starting to show.

“They’re lying again,” began the peach of a missive from Team Ford dismissing the poll. “Some hucksters called ‘Pollara’ did an online survey, and the media are reporting it like it’s real news,” it added. The fundraising email went on to quote the poor poll numbers, before adding “not a chance” and slandering the methodology. “These suckers peddling junk science to help sell headlines aren’t real pollsters.”

The PCs could be right—the polling might be bunk. Other polls certainly show a much tighter race. And plaintive emails like these are only performance art, a smash-and-grab for cash from the base. But the use of “huckster”—a word last in common usage during the Great Depression—shows how aged the PC base has become. But if the PCs are going to win—a bigger if by the day—this blue-rinsed crowd needs to turn out en masse. All the more reason to rile them up using the “media” as a prop.

It’s hardly the home-stretch the PC braintrust had imagined. At this point, the only question was supposed to have been how large a PC majority they’d be winning. And while it’s unfair to pin all of the slowing Tory momentum on Ford—he certainly didn’t force Brown out over dubious dealings with young women—it was absolutely Ford’s decision to scrap Brown’s moderate platform and replace it with…well…we’re still waiting.

Being without a costed platform with eight days to go until election day isn’t a great look. Especially when one of your main beefs with the incumbent is they’re unaffordable and irresponsible. Platforms might be oversold as communications tools, but they’re an awfully handy primer to have around when you’re asking voters to trust you with their province for a few years—especially when they don’t know who in the hell you are.

Even with its embarrassing errors, the tabling of Andrea Horwath’s platform at the start of the campaign has surely helped to persuade unhappy Liberals. Where can these voters go to similarly learn about Ford’s vision for Ontario? Yes, there is a PC website, and yes, there are items on that website. But they’re all petitions in an effort to get email sign-ups, and some of the promises don’t even have explanations beyond the plank’s headline. And are they everything? Or is there more to come? Is it affordable? Even voters desperate for change like to see a piece of paper with some figures attached. Stop short of that and it all feels a bit haphazard.

Fine. Platform-shmatform. There are other ways to get to know a leader. But the debates are done. And it’s not like Doug Ford has been blasting the airwaves, or doing reams of interviews, or subjecting himself to open town halls. Each day is a regimented announcement, followed by a brief media availability, capped by a rally with the faithful. It’s keep-away, not maximum exposure. It’s another reason for voters to wonder if there’s something to hide.

Now, a leopard doesn’t change its spots. Nor does a war room. It’s hard to imagine the PC approach to Ford changing. This leaves pounding the NDP as the only way forward. How hard should the PCs hit the NDP? As hard as they can, with the proviso that Bob Rae might no longer be the most effective punching bag; after all, those Ontario voters still spooked by Rae’s days at Queen’s Park were already taxpayers in the early 1990s, which means they’re by now pushing 50, i.e. old enough to already be in the PC camp reading angry missives about “suckers” and “hucksters.”

With Jack Layton on the rise in the late stages of the 2011 federal election, the Tory campaign—staffed by many of the same people now piloting Doug Ford—blunted Layton’s momentum not by slamming Tommy Douglas, but by hammering Layton’s cap-and-trade proposal, which Stephen Harper, backed by an analysis from economist Jack Mintz, warned voters would mean an extra 10 cents a litre at the pumps. The PCs need to pick through Horwath’s platform and find a similar target, one that relates directly to a voter’s pocketbook.

That Horwath’s platform has been out for weeks without a devastating pocketbook attack suggests there isn’t one to be made. Instead, the PCs continue to wheel out small-bore fire on the weird stuff said by some of the NDP’s loonier candidates. But nobody thinks Horwath is Hitler, no matter which meme one of her candidates “forgets” about posting.

Which brings it back to the Ford backyard and the need for a costed platform. If the PCs aren’t doing some serious math right now to get it out as soon as possible, there will be some other numbers that don’t add up to their satisfaction come election day.

And what a painful—and embarrassing—return to earth that would be.