The start of a new American evangelicalism 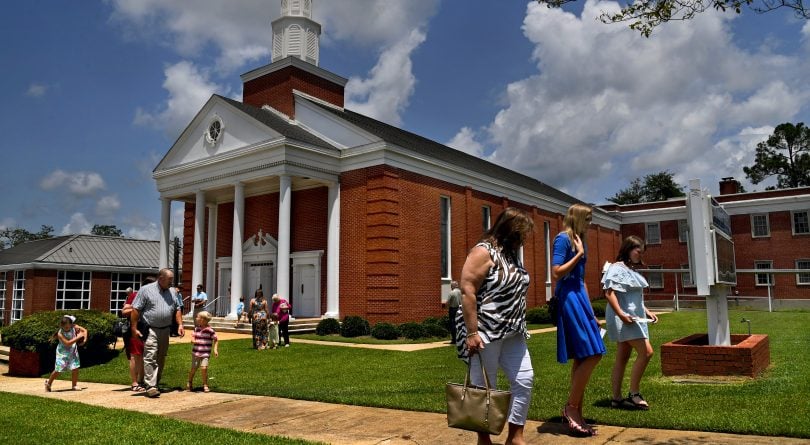 The word “evangelical” comes from the Greek language, meaning “gospel” or “good news”—and up until the 20th century, the sect was not considered to be especially conservative. Instead, these were people committed to the Christian gospel message that Jesus Christ is the saviour of humanity, and that often meant campaigns for social welfare, and against injustices such as child labour and slavery.

That’s not what they’re known for anymore in America. The highly active U.S. evangelical movement—with its schools, colleges, magazines, publishers, television and radio stations, enormous financial capacity, and mega-churches—has become the most influential religious group within America’s mainstream body politic. Evangelicals, especially white Americans who constitute the majority, punch above their weight at the voting booth: at least one out of four voters in the past four national elections has been a white evangelical, even though they now constitute around 15 per cent of the total American population.

Since the 1960s, the Republican Party has held a monopoly on this bloc, when American Protestants rejected what they saw as the progressive and too-permissive shift of their country away from their church’s values. The Democrats emphasized a new America—liberalized and more open—and so the Republicans became the only viable alternative for a group that increasingly embraced the uniquely American idea that the United States was a God-given enterprise. If the party of Eisenhower was too secular and moderate, it would have to be changed by force.

READ MORE: Roy Moore and the hypocrisy of America’s evangelicals

Now, it’s an expected rite for Republicans to take pains to make their faith a core facet of their campaigns. Evangelicals’ core political ambitions have become twinned to the Republican agenda—no abortion, no same-sex marriage, an unquestioning support of Israel that’s unrelated to an actual love for the Jewish people, and the appointment of Supreme Court justices who can make these goals happen—and if those are on the docket, evangelicals are happy to vote that way. More than a third of Republicans now identify as a white evangelical.

Even Republican President Donald Trump, who has boasted of his many sins in the past, has managed to woo this group. His arrival on the scene has coincided with a shift in white evangelicals’ worldview of politicians: in 2011, the Public Religion Research Institute found that 30 per cent believed “an elected official can behave ethically even if they have committed transgressions in their personal life,” but by 2016, that number swelled to 72 per cent. Eighty-one per cent of white evangelicals voted for Trump in the presidential election; in the 2018 midterms, effectively a report card on the presidency, 75 per cent felt Republicans still deserved their vote.

That’s about to change.

Trump, who is not an evangelical himself but eagerly bends to their will, has delighted the old guard—but appalled their children. After the midterm elections in November, the New York Times took an extensive survey of young evangelicals, finding that young evangelicals are questioning the ties that bind their church and Republican politics: “Many said it had caused schisms within their families. And many described a real struggle with an administration they see as hostile to immigrants, Muslims, L.G.B.T.Q. people, and the poor. They feel it reflects a loss of humanity, which conflicts with their spiritual call.”

They may not be on the political left, but they have grown up with gay friends and are aware of a tolerant culture. They have known about climate change since they were children. They defend Israel but understand the plight of the Palestinians. And they’ve rejected a Fox News that screams ultra-conservatism because, put simply, young people just don’t watch what has become a pulpit for Republican evangelicals.

A new generation has come of age. Generation X and millennials now make up 51 per cent of evangelicals in America, according to Pew. Many may have been able to hold their nose under George W. Bush, but Trump, with his proud vulgarity, roaring exploitation of hatred, and execrable personal behaviour, is something altogether different. The discomfort is palpable: How, this generation asks, can the Jesus who condemned the judgmental, hung out with the poor and marginalized, never actually mentioned homosexuality or abortion, and told us that if we don’t love others we won’t meet God, be the Jesus of a repugnant bully who empowers racism and fascism, and splashes around in the political gutter? How can those who claim to love Him ardently and loudly be so blind to Trump’s sinful foibles?

There’s increasing evidence that younger evangelicals are not voting because they can’t bring themselves to vote for either party. This offers an opportunity for the Democrats who, as the older generation of evangelicals inevitably passes away, could reshape the party to lure away members of this longtime Republican bloc. As Christian author Rachel Held Evans wrote, “Millennials want to be known by what we’re for, not just what we’re against. We don’t want to choose between science and religion or between our intellectual integrity and our faith. Instead, we long for our churches to be safe places to doubt, to ask questions, and to tell the truth, even when it’s uncomfortable.”

Change is on the way, even if it’s slow. But Donald Trump—a bellicose, self-styled disruptor responsible for tending to a powerful but shrinking flock—has a habit of expediting things. And if this president’s troubles continue, it could be, as Evans writes, a very uncomfortable year indeed.