Pam Palmater: Systemic racism in health care continues because it has been normalized, ignored and denied, while the system places an onerous burden on First Nations peoples to prove racist hospital treatment 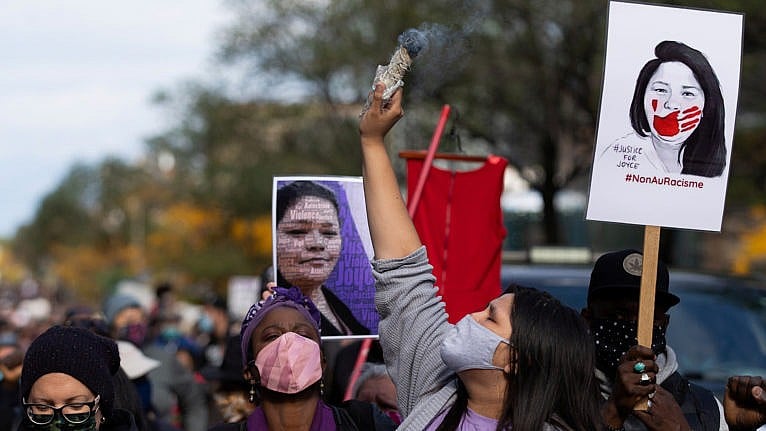 Dr. Pam Palmater is a member of the Eel River Bar First Nation in New Brunswick and Chair in Indigenous Governance at Ryerson University.

Imagine being hospitalized with a serious health condition and instead of being treated with professional care and compassion by the hospital, the last words you hear from hospital staff are that you are a drain on the health-care system and better off dead. This is the experience of Joyce Echaquan, a 37-year-old Atikamekw mother of seven, who used her phone to record hospital staff in Joliette, Que., abusing her with racist and misogynistic insults before she died. A First Nations woman who dies after being told she would be better off dead raises serious questions about the impacts of systemic racism on the lifespan of First Nations.

A recent study published by the Canadian Medical Association Journal found that Indigenous peoples have a 30 per cent higher death rate post-surgery than non-Indigenous patients. Further, Indigenous patients suffered higher rates of post-surgical complications and hospital readmissions. We also know that cancer rates for First Nations are increasing and that First Nations women fare far worse in terms of breast cancer survival rates than non-First Nations patients. Many studies point to a lack of access to cancer screening, health-care supports and hesitancy to seek out medical care due to racist, sexist treatment by health-care professionals.

READ: The events of 2020 have made it clear that no one can ignore racism

More than 9,000 people were interviewed for a report called “In Plain Sight: Addressing Indigenous-specific Racism and Discrimination in B.C. Health Care”; 185,000 data sets were reviewed and 600 cases logged. The report found that anti-Indigenous racism in health care is widespread and primarily targets First Nations. Racist stereotypes held by health-care workers about First Nations being drunks, drug seekers or less worthy of care manifest in ways that negatively impact the health and lifespan of First Nations due to denial of service, minimizing health concerns, rough treatment sometimes resulting in injuries, and medical mistakes and misdiagnosis rooted in racist assumptions. This has resulted in lethal outcomes for First Nations, with particular risks for women.

None of this is news. There have been many public inquiries, commissions, investigations and coroner’s reports citing the impact of anti-Indigenous racism on health outcomes. The Royal Commission on Aboriginal Peoples issued its report in 1996, outlining racism in Canada’s laws, policies and institutions that has created the poor socio-economic conditions in First Nations that in turn lead to poor health outcomes. The Truth and Reconciliation Commission report in 2015 called for anti-racism training for those educated in the health-care system. Most recently, the National Inquiry into Missing and Murdered Indigenous Women and Girls found Canada—all levels of government and their institutions—guilty of historic and ongoing genocide against Indigenous peoples. The report made a direct link between government and institutional desires to “maintain the status quo and their lack of will to make real change” and the high rates of violence against Indigenous women and their families, especially in the health-care system.

That is exactly what is playing out in Quebec at the coroner’s investigation into racist treatment suffered by Echaquan before her death. Quebec coroner Géhane Kamel, who is investigating the circumstances around Echaquan’s death, has expressed incredulity at the testimony of doctors and nurses from the Joliette hospital: all claim never to have heard racist comments about Atikamekw peoples at their hospital; none say they ever discussed Echaquan’s death. Referencing the testimony of Atikamekw people who expressed fear of the hospital, especially its nurses, Kamel told the hospital staff to be honest. She even wondered aloud whether they had been coached.

Therein lies the nature of the problem—systemic racism in health care continues because it has been normalized, ignored and denied by the offenders, who do so with a high degree of impunity. There is even a publication ban on the names of the hospital nurses involved in the investigation. The system has long protected offenders and places an onerous burden on First Nations peoples to prove racist hospital treatment and how it impacts their health. Were it not for Echaquan’s phone recordings, there would be no investigation or media attention on the racist attacks she experienced from hospital staff before her death. Yet, even now, with the video- and audio-recorded evidence, one nurse involved says she isn’t racist—just overworked.

No one wants to be held to account for racism in health care: not the offenders; not the professional health associations and unions; not the educational institutions or governments. Yet, the continued refusal to address systemic racism in health care, particularly against First Nations, perpetuates increasingly poor health outcomes, denial of health care and avoidance of health-care institutions, as well as misdiagnosis and even death. According to medical experts, Echaquan could be alive today had they given her the health care she needed. A few cultural awareness training sessions are not going to address this massive problem, because the problem has never been First Nation cultures; the problem is the racist culture in health care. That’s on them, not us.

This column appears in print in the July 2021 issue of Maclean’s magazine with the headline, “What Joyce Echaquan knew.” Subscribe to the monthly print magazine here.