Opinion: Despite a policy overhaul, the 2018 budget has set out virtually no new spending for the fundamentals of Canada's military. That's a problem. 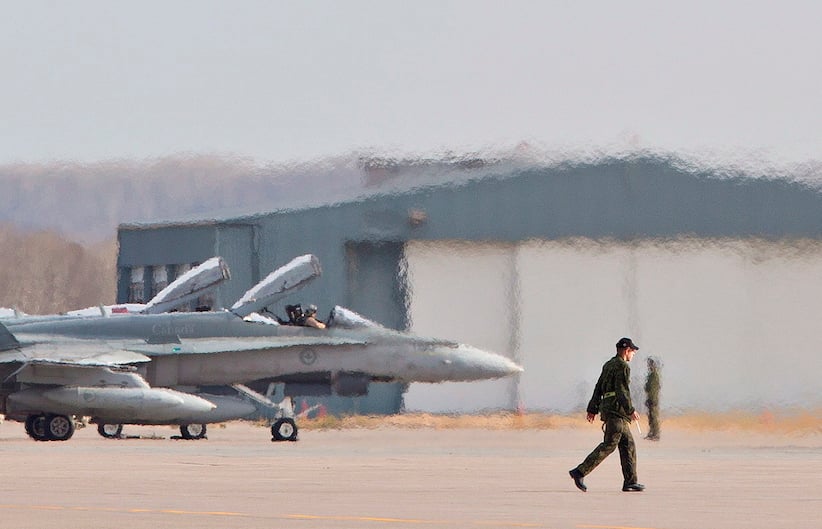 Military personnel prepare for the departure of CF-18 Hornets in support of Operation IMPACT, in Cold Lake, Alberta on Tuesday October 21, 2014. (Jason Franson/CP)

Ken Hansen is an independent defence and security analyst and owner of Hansen Maritime Horizons. Retired from the navy in 2009 in the rank of commander, he is a member of the Science Advisory Committee for Atlantic Oceans Research Enterprise and a contributor to the Security Affairs Committee for the Royal United Services Institute.

You really have to dig into Equality+Growth, the Liberal government’s 2018 budget document, to find any mention of defence spending at all. Only after more than 300 pages, in the Supplementary Information section, can you find a table that shows National Defence is the largest spender amongst government departments. At $25.5 billion, forecasted direct-program expenditures by National Defence will clock in at more than the next two departments—Indigenous Services Canada and the Canada Revenue Agency, which were both forecasted to spend $11.0 billion—combined.

The same table shows that the total for all direct programs spending from the government in 2018 will be $338.5 billion, so the defence part only comprises 7.53 per cent of that total. That seems minuscule until it’s compared with the $26.3 billion the government will pay covering the interest on the federal debt. Or—seen another way—given that the budget shortfall for 2018-19 is projected to be $18.1 billion, knowing what a significant portion of spending defence represents helps explain why it’s always a target for reduction.

Practically all Liberal governments of the past—and many Conservative ones too—have carved large amounts out of the defence budget to cut down on deficits. Recently, though, things have seemed different. Last year, the budget announced an eye-popping 70-per-cent increase to defence spending over the next decade, reaching $32.7 billion by the 2026/27 fiscal year, as part of the Liberals’ new defence policy, Strong, Secure, Engaged, released last year. This year, in addition to that significant top-line figure, there were some minor funding increases for the Defence Department; military family crisis centres will get $4 million over five years, plus $800,000 ongoing afterward. Operation IMPACT against ISIS will get $48 million over two years, but it will be refocused on security and stabilization efforts in Jordan and Lebanon. Work is ongoing to improve the military pension system and provide better care for disabled veterans.

So the likely course of action for the military leadership will be to hold their tongues and keep their heads down. But of course, there are problems—lots of them.

What was supposed to be a low-risk, two-year deployment to Afghanistan turned into the longest conflict in Canadian history. The army is broken and worn out. Beyond that, almost all major equipment systems are decades-old and the supporting infrastructure is in a deplorable state of disrepair. There are very great needs for increased defence spending just to rectify the material side of the house.

The human costs of Afghanistan have also been high. Suicide, depression and domestic violence are commonplace in the forces. Shortages of trained and effective members, most recently identified in the 2016 report of the Auditor General, have worsened. Recruitment targets are not being met and voluntary releases have continued to climb. Some military trades are now 20 per cent short of target manning levels. When five per cent short is considered a critical manpower shortage, 20 per cent is a catastrophe.

And most of the spending in this year’s budget is devoted to cybersecurity and cyberdefence; virtually no new spending has been set out for the fundamentals of Canada’s armed forces, including capital procurement.

When it comes to defence, absent a major threat, new capital program spending is always viewed as discretionary, meaning that Cabinet retains approval of all major programs and could reduce or eliminate them, even if recommended by Treasury Board. That was supposed to change with the Liberal defence policy, Strong, Secure, Engaged, released last year. The claim, made repeatedly by Defence Minister Harjit Sajjan, is that full lifecycle costs for all material needs were built into the new policy. However, the lack of capacity from within the department to administer major programs due to the lack of experienced military and public works program managers has already translated into reduced spending, despite the money carved out for them. “DND is on track to deliver barely better than half of the intended spending on new equipment and infrastructure,” wrote Dave Perry, vice president and senior analyst with Canadian Global Affairs, in a report in January. While some believe deferred spending will eventually be used as planned, I remain skeptical.

READ MORE: Why the Liberals’ new defence policy is so much, yet so little

In the short term, the lack of new spending in the new budget means DND will have to make economical choices for interim replacements for worn-out ships, aircraft and vehicles. The air force’s interest in acquiring used fighters from Australia may fit this purpose. But the navy’s leasing of a converted container ship from Federal Fleet Systems for $700 million over five years for operational sustainment is a less convincing effort at economy; it cannot be used for combat missions, so it will also have limited effectiveness.

The lack of new spending is only exacerbated by the fact that the future of many of the military’s legacy systems is murky. The design for the navy’s future warship has not yet been chosen and the future of the submarine fleet is being put off for further review. The need for more modern fighters, helicopters and other aircraft is also being weighed against the use of unmanned drones. This project will have significant cost regardless of which is chosen; moving to new platforms and methods will require extensive testing and development, plus a host of retraining and reorganization measures, while failing to recognize a new transformational age of drone technology and remaining with expensive legacy systems will mean huge expenditures for capabilities that risk becoming immediately obsolete.

Procurement decisions will also inevitably be complex and come slowly. This means, in the mid-term, the air force will likely have to look for an economical solution to replace their aged fighters. The navy will need to be content so long as the money in the Shipbuilding Strategy is left untouched. The army will also have to buy time until benefits of a decade-long funding increase produce useful tools. All of the services will have a long list of immediate and critical needs if a major new operation is announced.

That’s not to say that the investment into cybersecurity isn’t welcome. For some, cyber threats and unconventional warfare methodologies and the state of our intelligence capabilities are more worrying than the state of our military, and with major conflict with Russia or China possible, investment into the Communications Security Establishment (CSE) is an overdue priority that’s finally being addressed. As Benjamin Bergen, the executive director of the Council of Canadian Innovators, said in a CBC report: “Without a domestic capacity in cyber, we risk becoming a client state.”

But if this strategic principle is valid, and it is taken to its logical conclusion, the need for nationally planned and generated capabilities to address security risks should apply equally to the defence, security and safety sectors, or we risk becoming a client state in other avenues, too. Buying off-the-shelf foreign products that do not reflect our own estimates of need will not prove economical, as DND’s instinct to “Canadianize” a foreign-designed system to suit our situation will make that choice expensive all the same.

To assure that Canada has an independent and self-sustaining military, a common-sense appreciation of what the future holds is urgently needed—and that starts with the planning exercise of the defence budget. While money has been set aside in the previous budget, the proven difficulties with doling that out and the lack of explicitly budgeted new spending risks hamstringing the military at a critical juncture.