Opinion: If solving the struggles of the Manitoba town's residents wasn't enough, the federal government had plenty of other reasons to have stepped in sooner 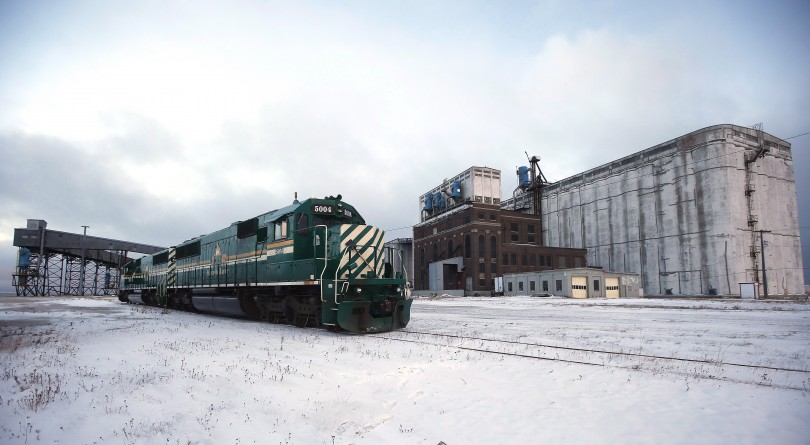 The first train in months to arrive on a repaired line is photographed in Churchill, Manitoba Thursday, November 1, 2018. Prime Minister Justin Trudeau visited Churchill today to announce the opening of the railway and the Port of Churchill. THE CANADIAN PRESS/John Woods

Ken Hansen is an independent defence and security analyst and owner of Hansen Maritime Horizons. Retired from the navy in 2009 in the rank of Commander, he is a member of the Science Advisory Committee for Atlantic Oceans Research Enterprise and a contributor to the Security Affairs Committee for the Royal United Services Institute of Nova Scotia.

The first train in 18 months on the Hudson Bay Railway pulled into Churchill, Man., on Halloween. The sad irony of the timing is obvious. The town of barely 900 people has suffered the horrors of deprivation since spring floods in May 2017 washed out the rail line in several places, and OmniTRAX—the American company that bought both the port and the railway in 1997 but closed the former in 2016—refused to pay for the repairs. When the rail link was lost, the only connection to the rest of Canada was through infrequent and expensive air flights.

Jobs vanished. Fuel became scarce. Food prices soared, and fresh commodities were practically unattainable. With only unemployment and welfare to sustain Churchill’s citizens, basic shelter and food costs became unaffordable. Some moved away, if they could afford it—but without a road connection, this largely meant abandoning their northern lives and any possessions that could not be packed into a suitcase.

But resolute belief about a positive future for Churchill did exist. The people who stayed banded together, and helped their neighbours wherever possible over the last 17 months. They sent a message that they would not give up their way of living easily: they held the CN and OmniTRAX engines and railcars that had been stranded in Churchill hostage while legal and political bodies debated the future of the line. Remarkably, the people of Churchill were not bitter and did not lay blame, understanding what southerners did not: they had faith in the future of their community, and that even though it is mainly known as the polar bear capital of the world, eco-tourism isn’t all that Churchill has to offer.

They were right to believe in their town. Churchill represents a golden opportunity for the Canadian government to solve a plethora of policy and practice problems that are unique to its location, as well as its port and railway—which only highlights how sad it is that the federal government took so long to intervene.

Since it opened in 1931, Churchill’s port has allowed deep-draft vessels to export grain in the summer season, and it enjoys a geographic advantage by being equidistant with the port of Montreal to European ports like Liverpool. That means that cargo sent to Churchill for loading saves on distance and time that’s roughly equal to travelling from Winnipeg to Montreal, whether the load is sent by truck, rail or ship in the St. Lawrence Seaway, or any combination of these transportation modes.

But perhaps even more important than Churchill’s role in international distribution is that it also serves as a distribution hub for many small communities in the central region of the arctic. Whether arriving by sea, rail or air, the cessation of any transportation service into Churchill would have a sudden effect on the whole region. Although the number of people affected is relatively small, the area impacted is huge; northern communities are not self-sustaining, so the consequences can be dire.

The same port that makes it valuable for distribution is also of military and strategic value. The distance to the Canadian high arctic from Halifax is actually further than that to Europe, which creates a very long supply line for any government activity, military or otherwise. The new DeWolf-class ships—the first of six planned will enter service in 2019—is a robust ship with extra capacity for people and materials. But while they will expand the government’s operating window at sea, they cannot solve major logistical problems by themselves. As the only deep-water port in the Canadian north with a land link to the south Churchill is both a vitally important enabler but also a critical vulnerability, especially when shipping options are limited. The port needs to be repaired, enlarged, and appropriately reinforced to meet the challenges of the climate.

The desire in Churchill to get back on its feet also aligns with the interest of the Canadian government in another big way: more mobility for oil and gas reserves, which is prompting record levels of crude oil moving by tank car and vessels carrying grain to be delayed in port.

Of course, the idea of transporting oil and gas by rail to Churchill is controversial, and it was actually put forward by OmniTRAX. The new, locally owned entity Arctic Gateway Group Limited Partnership that now owns it—which includes Manitoba communities, First Nations, Toronto-based Fairfax Financial Holdings and Saskatchewan-based grain company AGT Food and Ingredient, and has received $117 million in federal funding—has mooted the idea too. But the Manitoba government rejected it when OmniTRAX put it forward in 2013, citing the fears of a repeat of the disaster in Lac-Mégantic, Que.; according to the Transportation Safety Board, of the 63 accidents on the Hudson Bay rail line between 2003 and 2012, all but 10 were derailments.

But the movement of natural resource commodities along a corridor is not limited to road or rail. Pipelines have been built in northern climates similar to this, and people might be intrigued by the jobs that come with construction. Yes, any private or governmental initiative in the Arctic that requires heavy logistical support only has three options—sending the goods by rail, shipping during the ice-free season, which would require more than a year of planning, or paying the extremely high cost for air freight. But if the government of Canada is insistent on getting a pipeline to tidewater, the route from Hardisty, Alta., to The Pas, Man., is 790 kilometres eastward, traversing less populated areas than the 1,150 km of the Trans-Mountain pipeline and crossing fewer jurisdictional boundaries than the Keystone XL pipeline’s 1,897 km. This could be a better solution than those already proposed to the west or south, and with the record levels of crude oil currently moving by tank car—as grain shipments await delivery in Vancouver and Prince Rupert for historically long times—it represents an opportunity to bring economic development back to Churchill.

This issue is bigger than just the problems of one town, rail line or port. To be successful, safe, and efficient, coordination by federal and provincial governments is needed to manage a complicated network of systems and standards. During his Oct. 31 visit to Churchill, Justin Trudeau said that “the future of Churchill is in the hands of the residents”—but this is only partly true. Building a global view of how Canada fits into the big picture requires informed judgment and the courage to act. If building national capacity for a better future for the whole country just sounds like good government—well, it is.

Instead, it took media attention on a tragic story of isolation and Canadians in dire straits to force the government to act reluctantly in Churchill. It is a shame. But it’s not too late to make sure it never happens again.