Why are some First Nations leaders resisting the UNDRIP?

Opinion: For First Nations, the United Nations Declaration on the Rights of Indigenous Peoples is a useful—but under-applied—tool 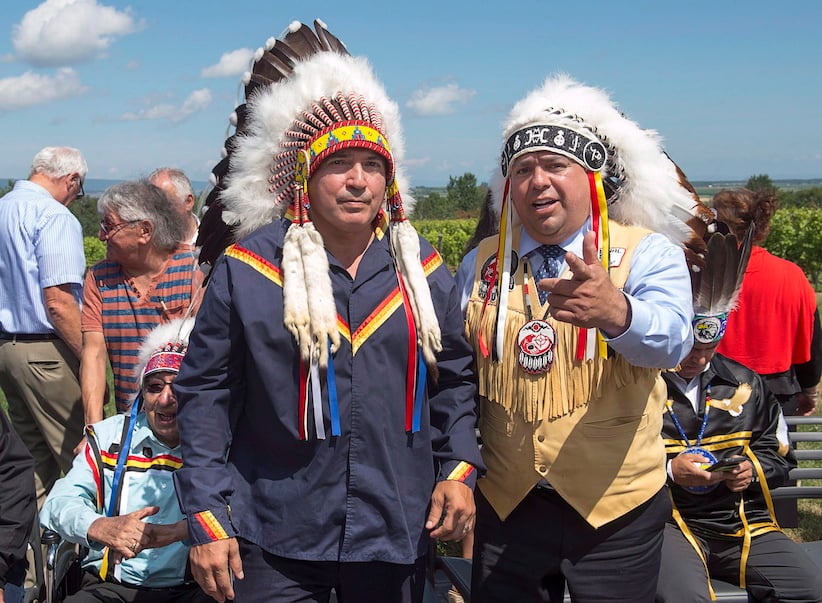 Perry Bellegarde, left, national chief of the Assembly of First Nations, chats with Morley Googoo, regional chief for Nova Scotia and Newfoundland, at a meeting of Atlantic MPs and First Nations chiefs in Wolfville, N.S., on Thursday, Aug. 10, 2017. THE CANADIAN PRESS/Andrew Vaughan

Natalie Clifford is a partner with Clifford Shiels Legal based in Nova Scotia. She offers services for clients on and off-reserve.

In the shadows of Canada’s colourful displays of unity, many Indigenous people live in isolation, fear, poverty, frustration and devastation. And division within the communities doesn’t help.

But it’s happening all the same. Division between community members and the government-created, albeit community-elected, band councils—tasked with managing money and all aspects of reserve life—is proving to be a detriment. This doesn’t just mean unrest and internal gridlock; the discord creates a weakened front in protecting against Indigenous rights violations by would-be exploiters and disinterested governments. It stifles First Nations’ ability to grow and improve.

But there is opportunity for change. In 2007, the United Nations General Assembly enacted the United Nations Declaration on the Rights of Indigenous Peoples (UNDRIP), with 144 countries in support of it. Four voted against it, including Canada, but in 2016, the Liberal government removed Canada as an objector. It’s a General Assembly enactment, so it’s not binding; it also remains unratified. Still, the UNDRIP represents the basic international standard for treatment of Indigenous people. Understanding its actual recourse in Canada requires a lesson in international law, Aboriginal law, constitutional law, and of the inner workings of band administration. But the essence of the UNDRIP is simple: it represents an internationally accepted minimum standard for treatment of Indigenous people, and it covers broad ground.

At the annual General Assembly of the Assembly of First Nations (AFN), a body directed by First Nations leaders and tasked to advocate on their behalf, Justice Minister Jody Wilson-Raybould indicated it would be “unworkable” to implement the UNDRIP into Canadian law, but that she would work together with band council chiefs across Canada to gradually respect all 46 provisions. This year, the minister also encouraged chiefs to consider the future and potential dismantling of band council structures, challenging them to envision their communities without the Indian Act. This is about as radical as government officials get when it comes to the Indian Act, and kudos are due to the Liberals for planting the right seeds; change and improvement won’t come in a stagnant environment. National Chief Perry Bellegarde also addressed AFN members on the topic and continues to advocate for the application of the UNDRIP.

The UNDRIP offers a pathway to building better Indigenous communities, and seems to be a cause worth rallying around for First Nations leaders. It would represent a powerful resistance to Canada’s Indian Act, which has long been used by the government to deny the First Nations rights. So why are some First Nations leaders so slow to apply the forward-thinking movement into everyday life?

Recently, in Nova Scotia, we saw a case that starkly showed the failure of an AFN-elected member to give the UNDRIP life. In August, Morley Googoo, the AFN Atlantic Regional Chief for Nova Scotia and Newfoundland and Labrador, spearheaded a historical celebration of the Mi’kmaq-Acadian relationship marked by the usual cultural displays—and one not so historically accurate display of Sioux-style tipis, made by a local Nova Scotian company whose owners are neither Sioux nor Mi’kmaq.

The Mi’kmaq historically built and used wi’kuoms—an art that has not been lost among Mi’kmaq people in the region. Wi’kuoms have a lower, dome-like structure in contrast with the narrow triangular shape of the tipi. One would not have had to ask around too long before finding a Mi’kmaw or Maliseet-run business in the region that makes wi’kuoms and tipis, and currently accepts orders for these items.

I’m sure the contracted company is run by good people. This has nothing to do with them; they have not violated any laws. It’s the First Nations leaders involved who have failed their people by not observing the UNDRIP.

If a leader doesn’t uphold the minimum standards for rights of Indigenous people, especially in relation to something as obvious as a historical and cultural celebration of the co-existence of culture and resilience in this region, then why do these people remain in leadership roles? A leader pushes for at least the basic standards of treatment for his or her people. It may be easy to dismiss this as an isolated or unimportant incident, but it has highlighted the lack of concern for the potential utility of the UNDRIP.

For some First Nations leaders, it may not be immediately clear how to make changes for the better. But others may very well be afraid of change. After all, the right to self-determination as recognized in the UNDRIP promotes Indigenous self-governance and autonomy. And by the nature of their positions, some First Nations leaders—whose positions are made possible by the Indian Act—are not necessarily actively interested in their communities’ achievement of self-determination, as it may go so far as to import a dismantling of the Indian Act itself, giving way to tribal, regional, or other community-based options for governance.

It can’t be left up to the Canadian government to bring the change, given its long, untrustworthy track record; after all, the stifling, government-administered Indian Act remains largely unchanged to this day. The civil freedoms and reliability of access to justice that Canadians value—in relation to estate management, property transactions, borrowing for business, and appointment of guardians, just to name a few—are for on-reserve First Nations, subject not to the even hand of an arbitrator, but instead to the discretion of the Minister of Aboriginal Affairs and Northern Development Canada (AANDC). Would a First Nations leader acting in the best interests of his or her community, and in accordance with the principles of the UNDRIP, consider complacency to government direction as a viable option? No. So why aren’t we seeing more change?

First Nations leaders have the opportunity to reject government interpretation and implementation of the Indian Act, and now have a useful tool to justify the same. This isn’t a new idea: A community in Cape Breton, Membertou First Nation did exactly this when it pulled itself out of desolation in 1995, despite government condemnation of its plans at the time. Membertou invested in its own educated community members who were working in business development across the country and led the community into a new era with a carefully tailored business strategy which required borrowing and risk, but was also informed and guided by Indigenous principles of conservation, sustainability and respect for nature. They went from operating on a $4-million annual budget that ran a $1-million deficit—dependent on government support and direction while experiencing devastating unemployment and poverty—to a recent $112-million annual operating budget, with increased job opportunities and world-class facilities. Their approach pre-empted the UNDRIP, but is a shining example of the basic standards for proper Indigenous treatment at work for betterment, and instituted by none other than a band council itself operating within the Indian Act, yet unafraid to oppose the government.

The UNDRIP is a tool which could facilitate great success for First Nations in Canada. If any First Nations leader is not interested in finding ways to bring it to fruition, including the possibility of leadership change in the best interest of their community, it begs the question: is the UNDRIP too little, too gentle, and too late? Or is it just an indication that those leaders need to be replaced?