Opinion: Canada faces a moment of truth—and a new document from Canada's Department of Justice can help show a way forward 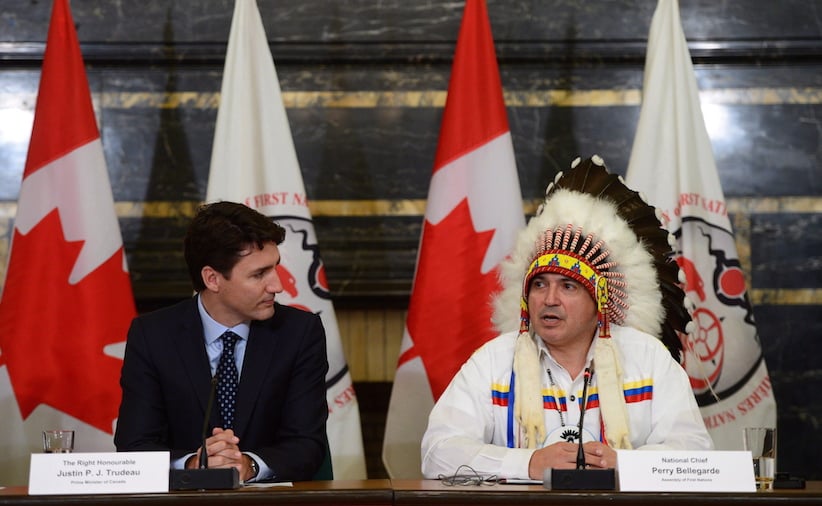 John Borrows is the Canada Research Chair in Indigenous Law at the Faculty of Law at the University of Victoria, and the winner of the 2017 Killam Prize in the Social Sciences.

What can Canada learn from the United States when it comes to Indigenous issues? At first blush, the answer might be “not much.” Native Americans warred with the U.S. military in the 19th century. Huge swaths of reservation lands were stolen through allotment in the 1880s. Many groups experienced unilateral legislative termination in the 1950s and early 1960s. Recent events at Standing Rock in South Dakota highlight these darker themes.

Yet there is another side to this story.

More than 50 years ago, U.S. President Richard Nixon placed Indigenous self-determination at the heart of U.S. law and policy. In the process, Congress reset the relationship between Native American tribes and the federal government. Nixon recognized the harsh truth of American colonialism: “From the time of their first contact with European settlers, the American Indians have been oppressed and brutalized, deprived of their ancestral lands and denied the opportunity to control their own destiny,” he said in 1970 in an address to Congress. Since the President made his statement, Congress has passed more than 40 statutes which have substantially strengthened Indigenous governance and enhanced their participation in public affairs. Democrat and Republican-led Congresses have largely acted in accord with Nixon’s call, which was “to act on the basis of what the Indians themselves have long been telling us …[and] break decisively with the past and to create the conditions for a new era in which the Indian future is determined by Indian acts and Indian decisions.”

While significant problems remain, this high-level call to break with colonialism and the turn to self-determination has led to substantive change and measurable improvement in the United States. Tribes broadly control federal service delivery, along with their own courts, legislatures, businesses, hospitals, social services, and schools. Indigenous economic development, while depressingly stagnant in too many places, has also become an important driver of state and regional growth in many key locations across the United States. While significant uncertainty exists under President Trump’s leadership, the main contours of this approach have held firm.

Fifty years later, Canada faces its own moment of truth. The Department of Justice recently released its “Principles respecting the Government of Canada’s relationship with Indigenous peoples.” This document also places self-determination at its heart. It recognizes that changing the relationship between Indigenous peoples and the Crown requires a repudiation of past policies and abuses. It acknowledges that building a brighter future means recognizing Indigenous peoples as key decision-makers across this land.

The Department of Justice’s “Principles respecting” document sets out some key commitments to create a brighter future. Commitments include affirming the inherent nature of Indigenous rights consistent with the United Nations Declaration on the Rights of Indigenous Peoples (UNDRIP). They highlight the necessary role of Indigenous governments in advancing our mutual interests. The document commits the government to principles of good faith, honour, recognition and reconciliation. It stresses the importance of treaties, agreements, consultation, cooperation, and consent. It accepts the necessity of fiscal sustainability and the need to treat these issues as an ongoing part of our governance processes across this land.

Indigenous peoples have seen some of these principles before—in court cases, commissions, speeches and policy platforms. At the same time, these principles have never been gathered as concisely and holistically as occurs in this federal document. Furthermore, as noted, UNDRIP has been added to these commitments. The document presents new opportunities to apply familiar principles in innovative ways.

The Liberals' plans for Indigenous reconciliation are just beads and trinkets

Now is the time for action. Implementation through sustained legislative commitment can start to turn the tide. If we fail to implement what is outlined in this document it will not be because the principles are flawed. These principles are broadly aligned with many Indigenous communities’ aspirations. They are also good for our economy and democracy: Indigenous economic activity generates money that is spent in our towns and cities, and Indigenous democratic participation draws more people and ideas into public life.

Canada must implement ideas that flow from its citizenry. This is even more crucial for people who have been denied such opportunities through colonialism and other marginalizing forces. Self-determination is an important key in this regard. Indigenous peoples must be partners in Confederation, and this will only occur through deepening patterns of real, effective, and respectful co-operation in ways which are consistent with this document’s principles.