With Brett Kavanaugh, misogyny is the message

Tabatha Southey: The Republican party has laid out a new contract with America and all it says is: We will put them in their place. 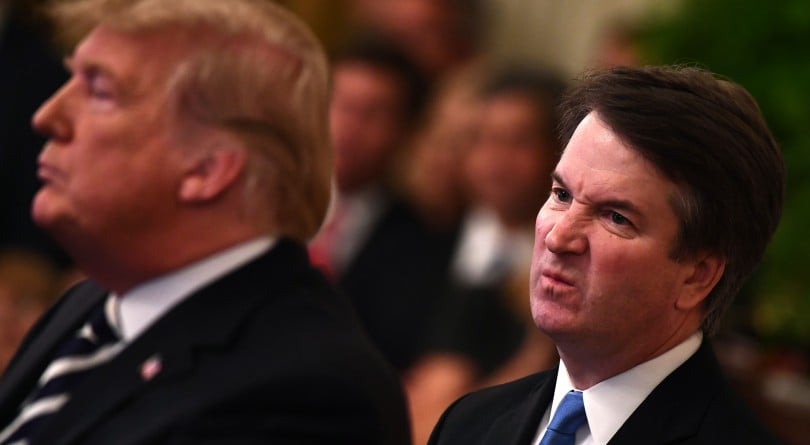 US President Trump speaks during the swearing-in ceremony of Brett Kavanaugh as Associate Justice of the U.S. Supreme Court on Oct. 8, 2018. (BRENDAN SMIALOWSKI/AFP/Getty Images)

For many, Brett Kavanaugh being confirmed to the Supreme Court was last week’s news before it was literally last week’s news. Most women watched the nomination process and saw that confirmation heading slowly and inevitably down the road towards them like a Macy’s parade balloon: “Oh, here it comes,” we thought, watching the Senate Judiciary Committee, “the elevation and celebration of a seemingly empty mass, of a hue that appeals to the target demographic, being propelled along its planned route, as is tradition, now looking for all the world like it might explode.”

Those who hoped that Dr. Christine Blasey Ford’s extremely compelling testimony — in which she alleged that Brett Kavanaugh and his friend Mark Judge sexually assaulted her when she was a young teenager, holding a hand over her mouth to muffle her screams — would derail his nomination were soon disappointed.

Blasey Ford was mild-mannered, but Kavanaugh countered by coming out angry and not exactly righteously angry, either. Kavanaugh’s tone ranged from “Hotel guest demanding the concierge let him speak to the manager” to “Toddler at a Chuck E. Cheese’s who has just been told he will only get to play the Skee Ball five more times before he has to go eat pizza.”

This was not a man carefully making a case in his own defence, reasoning and presenting evidence as one imagines a person trained in law would be. This was a man furious that something was being placed in his way and convinced that enough emotion deployed on his part could remove it. He was right of course: A man’s anger is his trusty aid as surely as a woman’s anger is her fetid albatross.

It was fascinating to watch the response to the two testimonies online, both in real time and after the fact. Many dismissed Blasey Ford as being too light-hearted. She laughed at Senate Judiciary Chairman Chuck Grassley’s “No one can mix up my coffee right” joke in a way, some insisted, that no woman who’d truly been victimized would laugh. In truth, she laughed at his joke the way all women have laughed at men’s jokes since Tharg held up a mastodon horn in a Rouffignac cave and said “What does this remind you of?” — a joke Cave Mistress Una politely insisted she had never heard before.

There has never been any winning here. At the end of the day, a woman is either a humourless bitch who probably takes everything the wrong way, or a flighty little thing who can’t be trusted to remember the face and name of the man who assaulted her.

“Christine Ford Giggles and Asks For Coffee After Claiming Kavanaugh’s Assault ‘Drastically Altered’ Her Life” scoffed one Gateway Pundit headline because, inevitably, a woman recounting a sexual assault will either be too traumatized to be credible, or not traumatized enough to be credible. Just as her story may well also be too imperfect to be believed, or too perfect to be real.

Kavanaugh was sworn in as the United States’ 114th Supreme Court Justice on Oct. 6 and there is no question it was his concoction of frothing rage and peaks of pique that got him there. The judge was willing to look a U.S. Senator in the eye, one who was trying to consider serious and credible allegations against him before confirming him to one of the highest offices in the country for life, and all but say, “How dare you question me?” This rage was a feature, not a bug. Also a feature, not a bug, were Kavanaugh’s lies. And it’s the lies more than the show-pony rage that I can’t stop thinking about.

As many have noted, Kavanaugh lied and lied and lied. He lied so obviously that the point seemed to be “Please notice how much I’m lying.” He indignantly claimed, for example, that he, a self-admitted and then re-self-admitted and then re-re-self-admitted beer lover, was only celebrated in his youth as part of the “Beach Week Ralph Club” because he couldn’t handle spicy food. Also likely a lie —  “I couldn’t handle my liquor as well as the other guys, not being much of a drinker” — would probably have sufficed had he tried it. It would perhaps have made him a touch more sympathetic but instead he went with the utterly ludicrous “I was both known for and proud of my minor health issue!” ploy. As if the lads of Georgetown Prep also noted the “Captain of the Eczema Team” in the yearbook.

Likewise, no one believes for a second that the words ‘Renate Alumnius,’ a phrase that appears repeatedly in Kavanaugh’s high school yearbook, was simply “a term … clumsily used to show affection” as Kavanaugh claimed at the hearing, sputtering sham-chivalry.  No one who has gone to high school or ever talked to a human being would buy that tale.

Certainly the Renate in question does not believe it. She was reportedly “horrified” by the references and withdrew her name from the much-trumpeted list of 65 women who signed a statement that Kavanaugh behaved “honorably and treated women with respect.”

I’d say that was the most meaningless text ever committed to paper, stone, clay or any other substance, but you should see my list of 65 men I have never axe-murdered.

Kavanaugh feigned outrage that anyone would think for a second that those Renate mentions had anything to do with sexual conquest. “Get your mind out of the gutter, Senator!” the judge all but yelled. “Why the good lass Renate was like a sister to us and that poem ‘You need a date / and it’s getting late / so don’t hesitate / to call Renate’ that one of my chums wrote in the yearbook merely honored her uncanny ability to find the more tardy lads suitable companions for the charity hayride.”

Why lie about this woman? Kavanaugh could simply have said he was ashamed and embarrassed about those yearbook references, which were youthful folly. He could have added sagely that he had matured since then, and that the reflection had made him a better judge. All of this would very possibly also have been a lie, but it would have been a plausible one that might even have melted some credulous hearts.

It sure seems as though Kavanaugh calculated that the brazen lie pays better odds than sincerity. Why else would he claim that “boofing” referred to “flatulence”? The question “Have you boofed yet?” appears to be asked of young Brett in the yearbook and so, should common sense or Urban Dictionary fail you, context makes it clear he’s simply not telling the truth. Unless he was known as “Kavanaugh the Unflatulent,” his angrily given definition is not remotely credible. It’s difficult not to conclude that not being credible was the point.

It’s the sheer gratuitousness of the lies that gets to the truth here.

Obvious lies are often a display of dominance. What  the world witnessed from Brett Kavanaugh at that Senate hearing was perjury as powerplay. A brazen lie is a dare. To say something that only a fool would believe calls the listener a fool but, more significantly, it also says “Come at me. I dare you. Do you think you can take me?” Liars demand a calculation from the lied to, a weighing of their own power vis-à-vis the fibber. Often that is exactly what the fibber wants, to remind you of your place. The listener must ask: Can I take him?

Mostly, the greater the power imbalance, the more fanciful the lie, a test that reinforces. When your boss says “I need you to work late,” and then offers a highly implausible story as to why he needs you to work late, what that lie says about your status can feel more exhausting than the extra shift. It is that exhaustion that a lot of women are feeling right now.

We watched Brett Kavanaugh lie to us, about one of us, and we thought: “He thinks he’s untouchable.” And of course, after all we’ve said and done, he was right.

There were some who argued that the Republicans should have just pulled Kavanaugh out, swapped in another easier-to-confirm judge with the same ultra-conservative bona fides the moment the sexual assault allegations came to light. But that’s missing the point. Those allegations and those smug lies are what clinched it for the judge.

The Republican party has laid out a new contract with America and it says: We will put them in their place. There are a number of “thems” the party seems intent on restoring to their prior positions, and a number of means being employed to get them back there. With Brett Kavanaugh, the misogyny is the message.