International and Canadian law leaves no doubt: what Omar Khadr experienced in Guantanamo was torture 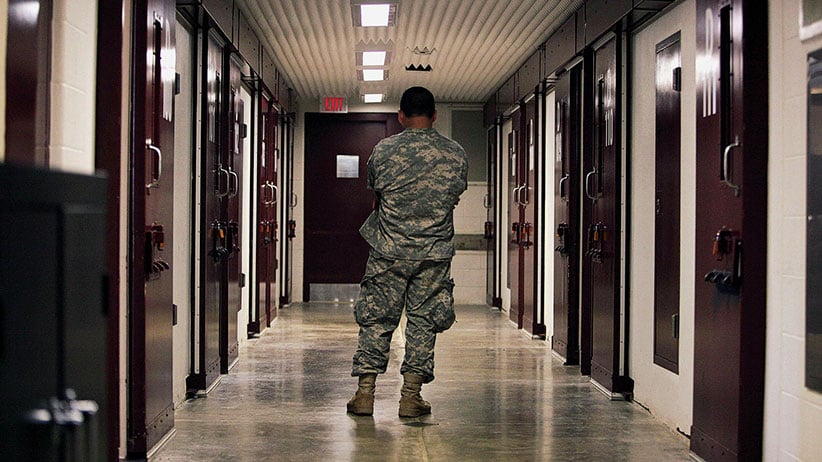 A U.S. soilder stands inside a hallway at Camp 5 detention facility on May 31, 2009 at U.S. Naval Base Guantanamo Bay, Cuba. (Brennan Linsley/Getty Images)

Stephanie Carvin is an assistant professor at the Norman Paterson School of International Affairs at Carleton University, and the author of Prisoners of America’s Wars: From the Early Republic to Guantanamo.

The $10.5-million Omar Khadr settlement has brought no shortage of commentary, but one of the most strongly asserted objections to it has been that Khadr is a “confessed killer” who has admitted his deeds in court.

One does not have to be a fan of Khadr to recognize that this claim is suspect. Documents released in 2008 related to the case revealed that Canadian authorities knew that while Khadr was at Guantanamo he was subjected to “the frequent flyer program,” where detainees were moved from location to location every three hours, denying him uninterrupted sleep for three weeks. This was apparently followed by three-week periods of isolation where he was denied any human contact.

Interestingly, the documents also stated that Khadr seemed to be handling the treatment well, noting that “the natural resilience of a well-fed and healthy 17-year-old [is] keeping him going.” So, was this torture?

The answer in international and Canadian law is undoubtedly yes. Canada is a party to the UN Convention Against Torture, where “torture” is defined as “any act by which severe pain or suffering, whether physical or mental, is intentionally inflicted on a person” for certain acts, including obtaining information. This is cited as a source of the international law which binds military operations in the Canadian Armed Forces Law of Armed Conflict Manual, which also states that “no physical or mental torture, or any other form of coercion, shall be inflicted” on POWs or detainees. Further, the CAF doctrine on interrogations states unequivocally:

Interrogation tactics which involve physical force—beatings, stress position, deprivation of food, and subjection to cold or hot temperatures are prohibited. Methods which are more subtle but have a harmful psychological effect are equally prohibited. Sensory deprivation, sleep deprivation, isolation, humiliation, music and light control, use of phobia, and environmental manipulation are also prohibited.

There is good reason for this prohibition. Medical science has demonstrated over and over that there is serious physical and mental harm caused by sleep deprivation. As a report on the effects of psychological torture notes, short and long-term effects can include “memory impairment, reduced capacity to concentrate, somatic complaints such as headache and back pain, hyperarousal, avoidance, irritability, severe depression with vegetative symptoms, nightmares, feelings of shame and humiliation, and post-traumatic stress disorder … incoherent speech, disorientation, hallucination, irritability, anger, delusions, and sometimes paranoia.”

By 2005, the Bush Administration found itself under mounting pressure from Congress and the international community regarding its interrogation practices at Guantanamo. Moreover, it was starting to lose a series of cases at the U.S. Supreme Court. As such, the U.S. banned the regime that Khadr was subject to under the Detainee Treatment Act which prohibited interrogation techniques not listed in the Army Field Manual on Intelligence Interrogation. (The Manual was updated in 2006 to say that detainees must receive four hours of continuous sleep per 24 hours—a policy that remains under international scrutiny.) On his second day in office, Barack Obama ensured these rules applied to all government agencies, including the CIA.

At best, one might argue the regime Khadr was subject to was not torture but rather “inhumane and degrading treatment”—this was the finding of the European Court of Human Rights in the case of the Republic of Ireland vs. the United Kingdom, when the former argued that the latter was mistreating suspected IRA detainees. However, this would still violate Common Article 3 of the 1949 Geneva Conventions, which insist that regardless of status, all detainees must be treated humanely at all times, even if those detainees are believed to have belonged to terrorist organizations.

But perhaps more importantly in this unfortunate affair are the commentators and politicians who are seemingly eager to side with human rights violators that used sleep deprivation to extract confessions. The technique was used against Menachem Begin, who went on to become the Prime Minister of Israel, in Soviet prisons during the 1940s. During the Korean War it was used against United Nations prisoners of war to obtain false confessions, which the North Koreans and Chinese then used to punish detainees further—a tactic later adopted by the North Vietnamese. In the 1970s and 1980s, it was used by the regime of Augusto Pinochet in Chile and the Soviets in Afghanistan. In 2001, Saudi officials used torture against Canadian William Sampson, including keeping him awake for a week, before he “confessed” to partaking in a bomb plot in that country.

Beyond the claims of a few Bush-era officials, there is little evidence that any of the information gathered at Guantanamo Bay was particularly useful or that it made anyone safer. Indeed, reports indicate that some detainees were subject to 180 hours of sleep deprivation; it’s hard to imagine anyone providing coherent intelligence after that.

Worse, there are good reasons to believe that Khadr’s participation on the battlefield was illegal and that he could have been charged and prosecuted in a normal court of law. Unfortunately, given the unreliability of information obtained after torture—including psychological torture—it means that Khadr’s “confession” is useless and future prosecution is likely to fail.

The fact remains that three Canadian governments failed to remove Khadr from Guantanamo, ensuring that he will never be properly prosecuted. Instead, the Supreme Court of Canada found that they actively contributed to his detention. Trying to pretend that sleep deprivation is not torture is not going to fix this—but it will actively undermine the credibility of those who claim they are supporting the rule of law.