Navdeep Bains and the Silicon Plant People from Saskatchewan

Paul Wells on the announcement of the winners of the Liberals' supercluster initiative—supercluster?—and why it's probably a good thing 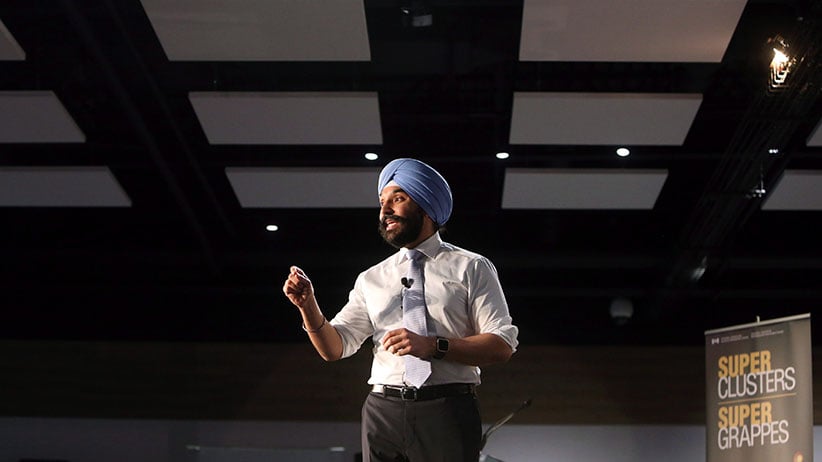 “What is a supercluster?” Navdeep Bains asked, basically, himself.

We were in a conference room at the Museum of Science and Technology, on a warehouse strip in eastern Ottawa near the highway. The museum is freshly renovated, thanks to money from, if we’re being honest, Stephen Harper’s Conservative government, which decided not to relocate the museum from its dispiriting precinct but did set aside some tens of millions to make it spiffy. Which it really is. Spiffy.

I caught only a glimpse of the museum’s exhibits on my way to Bains’s announcement. The permanent exhibition begins with some wooden sleighs from olden times and ends, I feel certain, with a Canadarm. Everything in Ottawa ends with a Canadarm. It is as though Champlain came to shore in 1603 and said, “Here, with the help of God, we can make things that will one day lift other things in space.” How his crewmen must have stared at him then.

But I digress. Navdeep Bains is the minister of ISED, which as everyone in Ottawa knows, stands for Innovation, Science, and something beginning with E. Here I am reporting to you the content of about 60 conversations everyone has had in Ottawa since the bright and personable MP for Mississauga—Malton was rewarded in 2015 for his prowess as a political organizer (the local Liberal nominees, all Bains protégés, rolled over the Conservatives and the third-place New Democrats, across the region, like a fleet of Zambonis).

“I have a meeting at ISED,” the conversation begins.

“It’s Nav Bains’s shop. It used to be Industry. You know. Innovation, Science and….”

On Thursday at the Museum of Science and Technology on the warehouse row near the highway, it became clear, in case there had ever been any doubt, that group (c) comprises a hefty plurality of all Canadians.

But I digress. “A supercluster,” Bains said, answering his own question, “is a made-in-Canada Silicon Valley that will create tens of thousands of jobs.”

The minister, in white shirt with rolled-up sleeves and necktie, striding the stage in a passable impression of his boss the Prime Minister, held a microphone and jabbed his free hand forward with each of the last words of his sentence. “Tens — of thousands — of jobs.” The audience, made up largely of consultants and PR people associated with one or another of the winning bids, clapped heartily, because if nothing else, the supercluster initiative has already been a big part of their own jobs.

Readers are referred to each organization’s website for information on what they will do. The amount of information you will get from each website varies spectacularly.

The next-gen manufacturing group from Ontario lists 27 people leading it, although it’s not clear how many will be involved on anything approaching a full-time basis (one is Meric Gertler, the president of the University of Toronto; another is my onetime colleague Giles Gherson, an Ontario deputy minister, listed as an “observer”).

The AI supply-chain group from, essentially, Montreal (wait! I guess I’m just guessing about that) is comically gnomic. I could find no name of any actual person or company anywhere on the website. Only a series of Zen riddles. “Over 120 industrial and enabling institutions, from very large firms to start-ups, have joined forces in this journey,” the website says helpfully, “and we have strong momentum.”

PIC will move Canada to second place in global agricultural exports and fifth in agri-food exports, equivalent to an additional US$30 billion in exports in today’s distribution of global export shares, and representing nearly 2% of current national GDP. Plant based protein is a $13 billion market opportunity.

Outcomes from this cluster will be a new range of plant-derived foods, ingredients and feedstuffs of superior quality, commanding market premiums. As such, the initial focus will be on value-added canola and pulse crop derived products developed by the value chain, including germplasm innovation, crop management technologies, through to advanced processing technologies yielding novel products and further enhancing value through quality, traceability and brand identity.

The protein people’s list of supporters  has more than 150 names, including the “City of Lethbridge”—I have family there; do they know they’re in on this adventure in germplasm innovation?; “Balsillie, Jim”; and something called “Naturally Splendid Enterprises Canada Ltd.”, which I could look up but I fear it would spoil the mystery.

As a few of us policy wonks marvelled at all of this on Twitter, it was popular this morning to note that there was precisely one winning initiative for every major region of the country, except I guess for the territories and, more conspicuously, Alberta, which had two projects among the shortlisted finalists but none among the winners. It was hard not to correlate this outcome with the Trudeau Liberals’ recent shaky performance in Alberta polls. Bains offered no description of the process that led from 50 applicants to nine finalists to five winners, except to assure reporters it was “rigorous.”

But he also said there was an informal process of self-selection and recomposition among applicants as the process went along. When Finance Minister Bill Morneau announced this supercluster business nearly two years ago, businesses and universities and incubators and industry associations started scrambling to constitute themselves as broad sectoral research initiatives. Some of their efforts were more impressive than others, and as the supercluster sector became self-aware and competitive, some would-be applicants threw in their towels early and joined with others.

So now we have these five. Each will get between $150 million and $250 million to spend over five years. The ISED official who briefed me wouldn’t say which winners were at the high end and which at the low end of that range; to some extent it depends on their ability to attract matching money from local business or, I suppose, from Balsillie, Jim.

The obvious questions that arise are to some extent contradictory. On one hand, a lot of observers are wondering whether this whole business is a perfect waste of money. On the other, it’s possible to wonder whether the federal investment is anywhere close to big enough. See? Contradictory.

Let’s take them in order. I was told, as the crowd dispersed after Bains’s announcement, that the protein people from Saskatchewan hope to take parts of plants that are currently discarded during processing and turn them into profitable new products. They have also noticed that more and more Canadians, often especially in younger demographics, are preferring substitutes like coconut milk and almond milk to traditional dairy and eggs. And they hope to get in on that. Now that they are officially a supercluster, the protein people from Saskatchewan want to get into those growth markets big time. But surely somebody on the open prairie was already thinking of heading in that direction? So it’ll never be clear which of the prairie protein products of the future was caused by superclustering and which would have happened anyway. Although one presumes one knows what the Liberals will claim, lo unto the end of days, when campaigning in Saskatchewan.

The opposite worry is that the money Bains announced Thursday will in the end come to resemble a drop in the bucket. At the high end, $250 million over five years, the richest superclusters will get about $50 million a year. By coincidence, a new report released Thursday called on the Quebec government to quintuple its own artificial-intelligence investment to $50 million a year (but for twice as long) or the recent AI bubble in Montreal might burst.

But that’s only about keeping Canadian activity at about the scale it was yesterday. Bains began popularizing his pitch by claiming that each of his superclusters will be a “made-in-Canada Silicon Valley.” Would that it were so simple. If the feds’ goal here is to step in for anemic Canadian venture-capital performance, they have barely begun to step in: quarterly VC investment in the real, made-in-Silicon-Valley Silicon Valley has lately hovered around $US5 billion. That’s about four hundred times the Canadian supercluster burn rate.

A visiting tech executive from Waterloo asked me the other day what I make of this whole project, and I had to say that it’s probably a good thing in a lot of ways. If good people from varied but compatible disciplines and activities have been having substantially more meetings about what they have in common and how they can face the future in smart and competitive ways, there’s a limit to my appetite for disdain. If thousands of people are suddenly in one another’s contact apps as they plan for a more ambitious next few years, there’s actually no telling how much good can come from it all, but it’s certainly more than zero and maybe vast.

If pulling Silicon Valley out of a hat were easy, it’d have been done by now. Lord knows every region-state in the world is trying to do it. But the protein people from Saskatchewan were in a fine mood on Thursday, and you didn’t have to be Balsillie, Jim to feel pleased for them too.