Where the U.S. election will be won or lost (and why Trump still has a shot): 338Canada

Philippe J. Fournier: Biden's lead in the polls has been remarkably consistent. The key will be what happens in states Trump narrowly won in 2016. 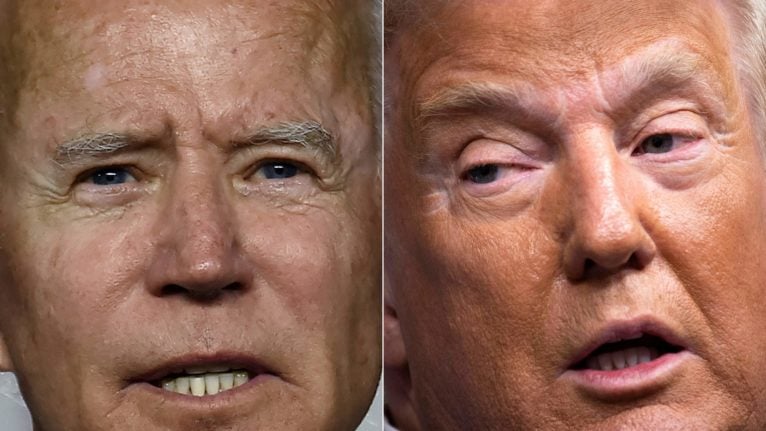 No U.S. presidential election in this century has measured a horse race as stable as the 2020 Biden-Trump race. Since April, Joe Biden has led consistently in the national numbers by an average of 5 to 10 points no matter what the news cycle brought—including a still mostly uncontrolled pandemic raging throughout the country. Even the Democratic and Republican conventions in August did not manage to move the needle significantly, a rarity in election years south of the border.

Tonight, the world will watch the highly anticipated first debate between President Donald Trump and Democratic nominee Joe Biden. What is the state of the race as we enter the last 35 days of this endless election campaign? Here is a brief rundown.

Taking into account the most recent polling between the main candidates, Biden’s average currently stands at 50.3 per cent. Trump, who won 46 per cent of the vote in 2016, currently sits at 43.5 per cent. The 95 per cent confidence intervals of those projection are roughly ±5 per cent, which means a near tie in the popular vote is as likely as a double-digit lead for Joe Biden.

In 2016, the national polling gap between Clinton and Trump was estimated at 3-4 points in the waning days of the campaign, and Clinton ended up winning the popular vote by 2.1 points. Thus, with a 7-point lead on average for Joe Biden, the simple fact that Trump remains in contention this time around is testament to the significant advantage Republicans enjoy in the Electoral College.

Indeed, according to the simulations performed by the 338Canada electoral model, Trump wins the Electoral College one out of every four simulations:

Let’s take a look at the electoral map. Each hexagon below represents a state (plus the District of Columbia). The paler the colour, the closer the race in the state:

If we breakdown the states by labels of safe, likely, leaning and toss ups, here is the current count:

As it currently stands, from safe, likely and leaning states, Biden holds 275 electoral votes (enough to secure the presidency) and Trump stands at 164 electoral votes. An additional 99 electoral votes are up for grabs from the toss up column: Arizona (11 electoral votes), Florida (29), New Hampshire (4), Ohio (18), Georgia (16), Iowa (6) and North Carolina (15).

Many Midwestern States, which had eluded Hillary Clinton in 2016 and gave Trump the keys to the White House, all currently look favourable to Joe Biden and have for months now.

Nevertheless, since it was in Wisconsin and Michigan where polls actually missed the mark in 2016, observers (myself included) will be excused from exercising caution towards these numbers.

Unsurprisingly, Florida (29 electoral votes) remains the “swingiest” of swing states: Only one point separates Biden’s current average (48 per cent) to Trump’s (47 per cent), hence the Sunshine State could, once again, determine who wins the White House in 2020.

Nonetheless, a significant amount of focus will be given to Pennsylvania (20 electoral votes), yet another state that Trump won by less than 1 point in 2016, and rightly so: According to current projections, Pennsylvania could end up being the tipping point in this election’s presidential election, meaning it could be the state whose electoral votes push either candidates above that 270-vote threshold:

The states on the graphs above and below are ranked according to the projected margin between Biden and Trump. As you can see, Pennsylvania’s 20 electoral votes currently take Biden across the 270 EV dotted line below:

Consider this: Take the 2016 Clinton-Trump map. Then flip Michigan, Pennsylvania and the second congressional districts of Maine (all of which were won by Trump in 2016 and are leaning towards Biden at the moment). What would you get?

Which means Trump would have no more wiggle room and couldn’t afford to lose a single additional electoral vote. Biden would only have to flip one more Trump state from 2016 to win the election.

The national polls were mostly successful in 2016, calling the Clinton victory in the popular vote within a reasonable margin of error. It was a few state polls in key Midwestern states that made a Trump victory so implausible in the eyes of many, yours truly excluded.

We at 338Canada HQ will follow the numbers daily all the way to election day on November 3rd. Stay tuned.