Here are all the times Donald Trump publicly dissed Canada

Over the past two years, Donald Trump has taken several swipes at Canada 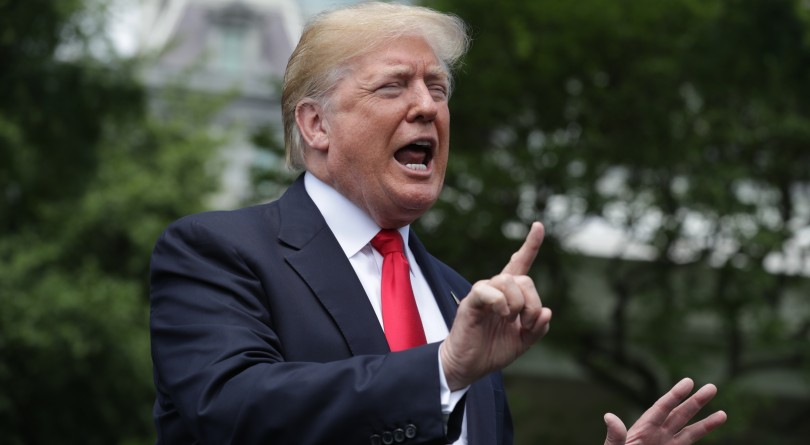 U.S. President Donald Trump speaking to media on South Lawn while leaving the White House on May 23, 2018 in Washington, DC. (Chip Somodevilla/Getty Images)

Since entering the White House, President Donald Trump has spent a lot of time bashing both America’s adversaries and its allies. Canada has not been immune from such swipes.

Here are the many shots Trump has taken at Canada over the past couple of years:

Speaking to reporters as NAFTA negotiations continue to drag on, Trump had choice words for both Canada and Mexico: “Mexico has been very difficult to deal with. Canada has been very difficult to deal with. They have been taking advantage of the United States for a long time. I am not happy with their requests. But I will tell you in the end we win, we will win and we’ll win big. … They’re very spoiled because nobody’s done this. But I will tell you, what they asked for is not fair.”

MORE: All Donald Trump’s NAFTA mood swings in one chart

Trump hasn’t just dissed Canada, he’s lied to the Prime Minister and boasted about it. At a fundraiser meeting in March Trump bragged that he deliberately made up statistics about America’s trade deficit with Canada in a conversation with Trudeau, even though he had no idea if they were true.

“Trudeau came to see me. He’s a good guy, Justin. He said, ‘No, no, we have no trade deficit with you, we have none. Donald, please,’ ” Trump said, mimicking Trudeau, according to audio of the private event in Missouri obtained by The Washington Post. “Nice guy, good-looking guy, comes in — ‘Donald, we have no trade deficit.’ He’s very proud because everybody else, you know, we’re getting killed.

‘Well, sir, you’re actually right. We have no deficit, but that doesn’t include energy and timber. … And when you do, we lose $17 billion a year.’ It’s incredible.”

Trump has regularly claimed that the U.S. runs a massive trade deficit with Canada. That can be argued several ways, but one of Trump’s stranger trade deficit tirades came in February. At a meeting with governors Trump declared he was wise to Canada’s sly ways: “We lose a lot with Canada. People don’t know it. Canada is very smooth,” he said. “They have you believe that it’s wonderful. And it is. For them. Not wonderful for us. It’s wonderful for them. So we have to start showing that we know what we’re doing.”

While talking about a long-awaited infrastructure plan, Trump reverted to one of his favourite topics: how America’s “so-called allies” have taken advantage of his country. “Canada does not treat us right in terms of the farming and the crossing the borders.”

Trump has taken several runs at Canada over the issue of U.S. dairy access to Canada, taking to Twitter to vent:

Canada has made business for our dairy farmers in Wisconsin and other border states very difficult. We will not stand for this. Watch!

Two months after praising America’s “very outstanding trade relationship with Canada,” we were back in the bad books after Trump heard complaints from Wisconsin dairy farmers about Canada’s supply management system. “Canada, what they’ve done to our dairy farm workers is a disgrace,” Trump said, in an Oval Office speech. “It’s a disgrace.  I spent time with some of the farmers in Wisconsin, and, as you know, rules, regulations, different things have changed.  And our farmers in Wisconsin and New York State are being put out of business, our dairy farmers.”

There was once a time when Trump loved Canada’s public health care system. That time was in 2000, when he wrote: “We must have universal health care” and “The Canadian plan also helps Canadians live longer and healthier than Americans” But that was then. During the 2016 presidential campaign, Trump attacked Hilary Clinton’s health care platform by going after Canada’s single-payer system. “Canada’s [health care] system is so slow,” he said during a debate. “It’s catastrophic in certain ways.”