Allen Abel reports from Washington as the U.S. president enjoys an off-week for Congress and meets an actual fan in Brazil's Jair Bolsonaro 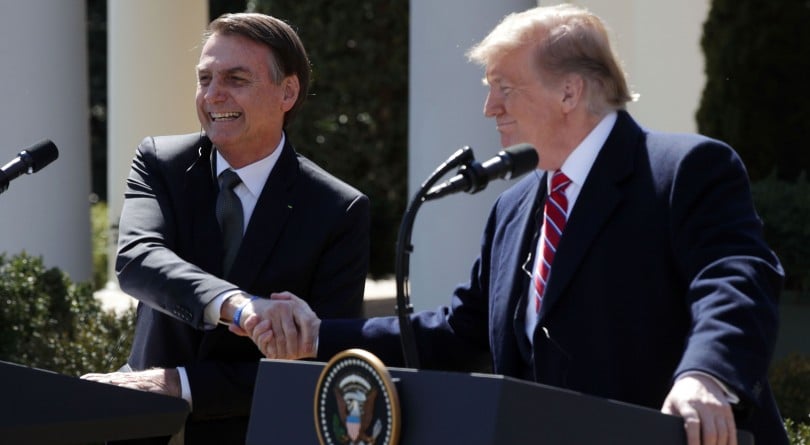 Two thrice-married fathers of five—kindred chieftains of the Western Hemisphere’s two largest democracies—a.k.a. the Trump of the Tropics and the Trump of the Triboro—romanced in the Rose Garden of the White House Tuesday, though “romanced” in this context may be inappropriate, given that one of these eminent populists once declared that he would “rather my son die in a car accident than be gay.”

Hint: he also was the man who admitted in public that “I never beat my ex-wife. But I thought of shooting her various times.”

He was President Jair Bolsonaro of Brazil, when the newly-inaugurated right-winger pledged his fealty to the American bossman, who then duly told the convention of  the American Farm Bureau Federation in New Orleans: “They say he’s the Donald Trump of South America. Do you believe that? And he’s happy with that. If he wasn’t, I wouldn’t like the country so much. But I like him.”

“I am against gender ideology, political correctness, and fake news,” one of the two presidents said Tuesday, and this wasn’t Donald Trump either.

“When you think about it, maybe you could be a NATO ally,” Trump gratefully responded, inviting the Brazilians to join the North Atlantic Treaty Organization just in time for the United States to abandon it.

We were a world away from Copacabana and 400 kms south of the Triboro Bridge, the span that links Queens, where Trump was silver-spooned, with Manhattan, where he turned his father’s millions into billions, according to his own accounting, and with the Bronx, where the Trump Golf Links at Ferry Point embellishes the riding of Rep. Alexandria Ocasio-Cortez, the bombastic young Democrat whose public-approval rating, according to a Gallup poll this week, is even lower than Donald Trump’s.

If you’re keeping score at home, Congresswoman Ocasio was ranked as “favourable” by only 31 per cent of New York State voters, compared to the (unsourced) 52-per-cent rating that Mr. Trump tweeted about on St. Patrick’s Day.

(President Bolsonaro, meanwhile, was batting .800 in the Paternity League, having once explained that “I have five children. Four were boys, on the fifth I got weak and had a daughter.”)

“Brazil and the United States together scare the defenders of backwardness and tyranny around the world,” President Bolsonaro had tweeted on arrival in Washington on Sunday. “Those who are afraid of partnerships with a free and prosperous country? That’s what we came for!”

“Brazil does have a president who is not anti-American!” the Donald Trump of South America emphasized now amid the ceremonial flowerbeds.

For Trump, Bolsonaro’s visit—and a one-week Congressional recess—provided a respite from the rampaging criminal, collusive, and campaign-finance investigations that will fill every hour of every day of the rest of his first term, and his second, should he again prevail at the polls, 602 days from now.

“The people are smart—the people get it,” Trump said Tuesday, even though the majority of people who voted in 2016 chose somebody else. Meanwhile, Sen. Elizabeth Warren, one of nearly 20 Democratic riders in the next rodeo, was in Mississippi, calling for the abolition of the state-by-state Electoral College, the 18th-century relic that put Trump in the Rose Garden, side by side with one of the few democratically-elected world leaders who looks Trumpward with respect and not disgust.

“I have always admired the United States,” Bolsonaro said now to the right-winger on his left. “This admiration has only increased since you took office,” he continued, and how many times have we heard a foreign leader say that?

“The twilight hour of socialism has arrived in this hemisphere,” Bolsonaro was saying at the White House, parrying Mao. But just around the corner on Tuesday, four brawny stalwarts from Local 1 of the Bricklayers and Allied Craftworkers Union were standing next to a giant inflatable rat, which was meant to represent the federal contractors who refuse to pay the statutory wage of US$30.61 per hour for journeyman and $13.04 for general labour.

“Most workers fear asking their employer about their wages,” read a brochure the men were handing out. “Why? Retaliation. One question to the subcontractor about how much they should be getting paid is just what it takes to get fired.”

If ever four men looked like certain supporters of the Trump of the Triboro, it was this quartet, or at least the three white men among them. Yet when a passer-by inquired of their presidential preference, The Donald was batting zero.

“Sanders just unionized his campaign staff,” the African-American in the group announced, and this was true, and meaningful to the hod carriers of Pennsylvania Avenue, and perhaps predictive of the presidential election that looms a mere 86 weeks away—Bernie of Brooklyn versus Trump of the Triboro, two children of the 1940s at opposite poles in the grand game of freedom.

“Bernie is 77,” the men were reminded, on a good day in their town for the other team. “Isn’t that too old?”

“It’s not too old to be president,” the black man of the quartet replied. “He’s not trying to play in the NBA.”