Donald Trump, President of the United States of America, forever the victim 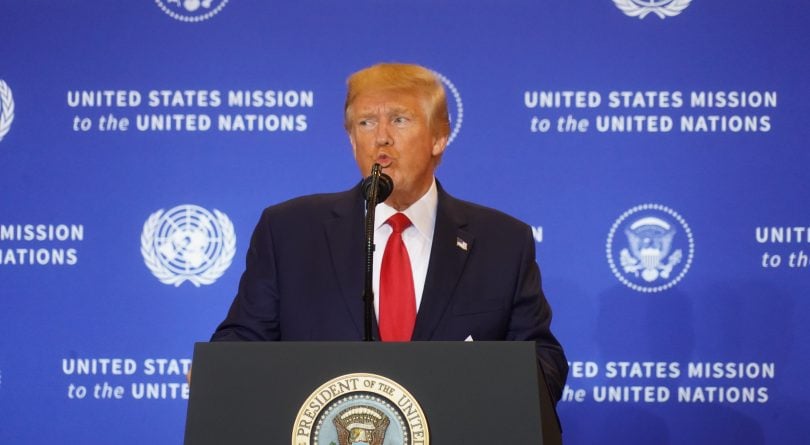 President Donald Trump had a news conference at the InterContinental Barclay New York Hotel during the UN General Assembly, on September 25, 2019 in New York City, US. (Photo by Selcuk Acar/NurPhoto via Getty Images)

President Trump has had many catchphrases throughout his career as a real estate mogul, reality show star and president of the United States of America. Though not as prolific as ‘You’re fired!’ or ‘Fake News!’, a phrase he has turned to multiple times as things started to become rockier in the White House is ‘presidential harassment.’

He has used it about 30 times since he became president, the first time being in November of 2018. Trump’s perception that he is being hassled and under-appreciated points to, many would say, an unbelievable sense of entitlement and delusion as his presidency crumbles around him with an inquiry into his impeachment underway. The idea that his many wrongdoings and those of his administration simply amount to him being ‘harassed’ is particularly rich given that he’s been accused by several people of actual sexual harassment.

So, what does Trump think calls for a cry of ‘presidential harassment’? Here’s a look at all the times he tweeted out the phrase with no context and usually in all-caps as a catchall for his feelings of victimhood and persecution as his year became worse and worse. (Note: To keep this succinct, we did not include the times he used the phrase in a sentence.)

PRESIDENTIAL HARASSMENT! It should never be allowed to happen again!

He had more to say in this one than just the phrase, but it didn’t provide much context. This was around the time where Trump’s tax returns were back in the spotlight.

Trump tweets out a Fox News segment of pundits lamenting the “witch hunt” that is the Mueller probe. They talk about the “abuse of power” by Democrats and the idea of bringing in the IRS to “abuse President Trump himself.” The language really enables the President’s tendency to paint himself the victim of “presidential harassment.” But, what did we expect from Fox?

Here, Trump is griping some more about the ‘witch hunt.’  “The greatest overreach in the history of our Country. The Dems are obstructing justice and will not get anything done. A big, fat, fishing expedition desperately in search of a crime, when in fact the real crime is what the Dems are doing, and have done!”

This was tweeted two minutes after “I cannot believe the level of dishonesty in the media. It is totally out of control, but we are winning!” Surprise, surprise, this is more griping about the Mueller investigation.

This was the day the Mueller report was released. The tweet before this one: “The Greatest Political Hoax of all time! Crimes were committed by Crooked, Dirty Cops and DNC/The Democrats.”

Here, Trump tweeted a clip of Fox show Life, Liberty & Levin, which attacks the Democrats for trying to uncover Trump’s tax returns. Then, the clip shows Levin discussing all the ways previous presidents sent the IRS after their enemies, presumably to illustrate that they were the real bad guys. 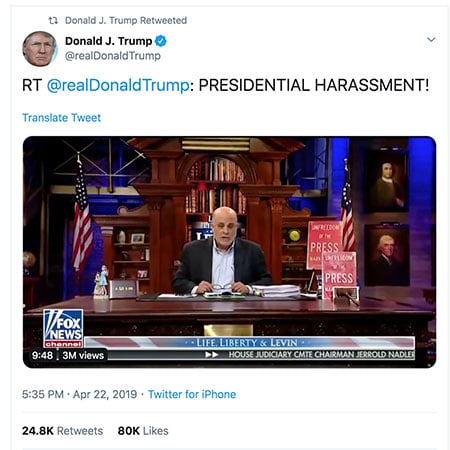 He retweeted his last tweet about five hours after he posted it.

Trump’s getting frustrated. This is around the time he walked out of a meeting with Nancy Pelosi and announced in the Rose Garden that the Democrats need to “get these phony investigations over with.”

Two tweets preceding that, on the same day include, at 5:02 a.m.: “The Democrats are getting ZERO work done in Congress. All they are focused on is trying to prove the Mueller Report wrong, the Witch Hunt!” and “After two years of an expensive and comprehensive Witch Hunt, the Democrats don’t like the result and they want a DO OVER. In other words, the Witch Hunt continues!” at 4:58 a.m.

Trump’s border policy had come under fire with reports that more than a hundred children were being transferred to a Texas shelter where hundreds more were being held in crowded and dirty conditions. Trump was quoted in an article on this day denying responsibility for the wretched conditions, stating that the shelter was built during the Obama administration and it wasn’t designed for children.

Here, Trump is reacting to the world’s reaction to his now infamous rally in North Carolina, where the crowd exploded into chants of “Send her back,” inspired by his racist tweets about Democrat Ilhan Omar. This cry of presidential harassment was sandwiched between a tweet that said, “The Washington Post Story, about my speech in North Carolina and tweet, with its phony sources who do not exist, is Fake News. The only thing people were talking about is the record setting crowd and the tremendous enthusiasm, far greater than the Democrats. You’ll see in 2020!” and another that stated “MAKE AMERICA GREAT AGAIN!”

And of course, as incredulity swirls around Trump’s discussion with the Ukrainian president, the president cries harassment yet again. “Another Fake News story out there – It never ends! Virtually anytime I speak on the phone to a foreign leader, I understand that there may be many people listening from various U.S. agencies, not to mention those from the other country itself. No problem!” In another tweet, “I would only do what is right anyway, and only do good for the USA!”

Trump turns to one of his favourite phrases again, this time as a swift reaction after news that the U.S. House Democrats are launching a formal impeachment inquiry against the President after the Ukraine debacle.