Elizabeth Warren, haunted by ghosts of sexism past 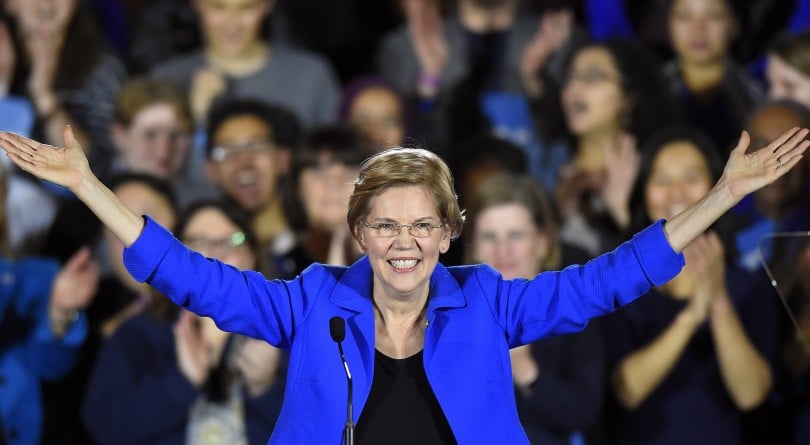 Here we go again. Hours hadn’t passed since Elizabeth Warren announced her exploratory run for U.S. president in 2020 that we were treated to a stealth display of media gender bias, also known as We Have Learned Nothing From the 2016 U.S. Election. It arrived via a POLITICO story, “Warren Battles the Ghosts of Hillary,” destined to be studied in journalism schools, should they continue to exist, as a textbook example of how to build a straw-woman argument. Already the Warren camp, outraged by the contents, has capitalized on it to fundraise.

Zero evidence is presented by POLITICO of what sounds like an awesome supernatural catfight. (The story is illustrated with a stock photo of Warren and Clinton, both smiling, on the campaign trail.) By “ghosts of Hillary,” POLITICO was not referring to Clinton’s success being nominated as the first women candidate for a major party or the fact she won the popular vote. No. It was that, according to an unnamed source, Warren “shares too many of the attributes that sank Hillary Clinton.” That would not be Russian operatives but the riptide of criticism Clinton faced throughout her two presidential attempts: that she’s “unlikable,” “aloof,” “cold,”  and “shrill.”

What makes the story, written by a woman, particularly insidious is how it associates Warren with “unlikable” and “aloof,” terms that are political poison for women, while quoting people asserting she is neither. The subtitle says as much: “In interviews with POLITICO, advisers and allies project confidence that perceptions of her as cold or aloof will fade once people see her campaign.” An unnamed former Warren advisor is quoted praising Warren as a “warm and affectionate person.” Patty Judge, a former Iowa lieutenant governor, calls Warren “dynamite when you’re with her. She’s magnetic.” The “aloof” claim, it’s explained, stemmed from Warren not stopping to talk with reporters in Senate corridors because she was busy projecting the image of a “workhorse”: “It got under Warren’s skin,” a former adviser said, a comment that suggests she’s thin-skinned rather than pissed off by a label she felt was inaccurate.

Exactly who is harbouring these “perceptions” is not spelled out by POLITICO beyond unnamed “Washington Democrats” complaining privately that Warren is dropping in the polls because she’s “too divisive and too liberal.” N.B.: the “toos”—Too loud, Too liberal. Too angry. Too intellectual—are handy codewords used to discredit female candidates, to say in fact why they are lacking. The tone-policing is built-in.

As it is with “likability,” a word measured differently for men and women, though that’s changing slowly as female ambition and anger are no longer viewed as psychiatric disorders. Qualities in a man that win descriptors such as “passionate,” “determined,” and “relentless” in the political realm tend to translate into “strident,” “shrill,” and even “hysterical” in a woman. People like the familiar. And that doesn’t include women running for the highest political office in the U.S., or Canada for that matter. They’re freaks, which is why staged attempts to make them “relatable” are doomed to fail.

Warren has faced the no-win likability metric before. A 2017 Boston magazine story “Why is Elizabeth Warren so Hard to Love”  actually describes her in glowing terms: as the “de facto leader of the anti-Trump resistance” and “the antidote” to liberal despair. Her life story is “ready-made for the Rust Belt campaign trail” it stated, noting “Warren is seen by many as a potential torchbearer, someone who can reach voters in Dayton, Ohio, and Macomb County, Michigan.” Still,  double standards abound. “I’m reminded of what a friend of hers told me,” the writer states: “‘The public persona is the private persona.’ There is no other person.” This is presented as a problem. In a male candidate, it’s “authentic.”

RELATED: Elizabeth Warren to Donald Trump: ‘Hate is not OK’

In POLITICO, Warren’s biographer, Antonia Felix, says she’s confused by how Warren is being treated: “All of us are just scratching our heads over why this is happening. She has a great operation, she’s very smart about it all,” she says, adding, “She’s not just a viable candidate, she’s someone who can actually win. It’s like they’re throwing cold water on that.”

She’s answered her own quandary, of course. POLITICO goes so far as to say that Warren’s presidential candidacy, discussed for years, will give people pause given her low polling numbers: “Fair or not, Warren will have work to do to overcome wariness of her likely candidacy.” The fact Warren boasts an impressive record and brings vital credentials to the race is treated as an afterthought at a moment the U.S. government is separating babies from their parents at the border. She’s a former Harvard law professor who effectively lobbied for financial reform to help the working-class before being elected the first female senior senator from Massachusett in 2013. A powerful speaker, Warren is the author of eleven books addressing middle-class distress and financial inequities, including the 2003 The Two-Income Trap: Why Middle-Class Mothers and Fathers Are Going Broke written with her daughter Amelia Warren Tyagi, which notes having a child is the single best predictor of whether a woman will declare bankruptcy.

Warren’s consumer advocacy led to the 2010 creation of the U.S. Consumer Financial Protection Bureau, the institution offering the protections needed for people bankrupted by scams like Donald Trump’s Trump U. Her talent for entertaining audiences made her a regular on the Dr. Phil Show and Jon Stewart’s Daily Show where she outlined how Americans were being screwed over by financial institutions.

POLITICO could have as easily fretted “Warren Battles the Ghost of Sanders” given that Bernie Sanders is a progressive who failed to win the Democratic nomination. Instead the story stokes a false equivalency between Warren and Clinton underlined by a false assumption: that because two women are white, of a similar age and served as Democrat senators, they’re fungible. They’re not. For one, Clinton was slammed for being too cozy with Wall St. Warren’s long-standing call for more stringent banking regulations has made her a Wall St. pariah which no doubt will haunt her, too.

READ MORE: No, Hillary Clinton should not ‘Shut the F–k Up and Go Away’

Instead of talking policy, POLITICO quotes a former Warren aide talking about how the two women differ in terms of “crust”: “Hillary had three decades’ worth of animosity — it was just the way the world had treated her — that had built a crust around her that you really couldn’t penetrate. I don’t feel like Elizabeth has that kind of edge to her.”

To downplay Warren’s edge, however, is to ignore the source of her success—and strength. She has ignored scolds like Mika Brzezinski of Morning Joe, who in 2016 said she “loved” Warren but called for her to “stop” being so militant: “There’s an anger there that was shrill, and a step above what it needed to be,” Brzezinski said. “Unmeasured and almost unhinged.” Warren boasts of having been a tough law professor, famously called out Hillary Clinton for caving on bankruptcy reform, and freely admits “I’m furious.”

She’s unrelenting in calling Trump out on Twitter, once ordering him in 2016 to put on his “big-boy pants.” Her refusal to shut up after the Senate voted to silence her objection to Jeff Session’s confirmation as U.S. Attorney General was a mobilizing moment. Republican Senator Mitch McConnell’s criticism of Warren—“Nevertheless she persisted”—became a rallying cry and slogan on Resistance merchandise. Measuring Warren in terms of how “likable” she is is a way to try to bell her. That’s because calling a woman “unlikable” in the political realm is another way of saying she won’t do what she’s told.

Contrary to its title, POLITICO observes that the ghost most likely to haunt Warren is not Clinton but the October DNA test she disclosed to dispel longstanding rumours that she lied about being part Cherokee to advance her career through minority quotas. (As POLITICO notes, a 2018 investigation by the Boston Globe found such claims were not considered by the Harvard Law faculty or by four other law schools who offered her teaching positions.) Trump, the prodigious liar, seized on the rumours in the past to discredit Warren with his vile “Pocahontas” taunt.

Warren’s attempt to placate critics backfired and she was blasted by various quarters. POLITICO calls the botched DNA reveal “quite possibly a White House dealbreaker,” which is saying something in a country where lack of political experience, boasts of assaulting women, ridiculing people with disabilities, lying, and uttering racist statements didn’t stop Trump from becoming president. But that’s not the real potential dealbreaker for Warren. Nor is it the resurrected ghost of Hillary Clinton who, let’s never forget, lost. The dealbreaker isn’t a ghost at all. It’s living and breathing and all around us, writ large in the most innocuous-seeming political journalism.