How Americans underestimate the threat of the coronavirus

Philippe J. Fournier: Like so many things in America today, it's all about Donald Trump—and, polls show, the thinking of his Republican supporters 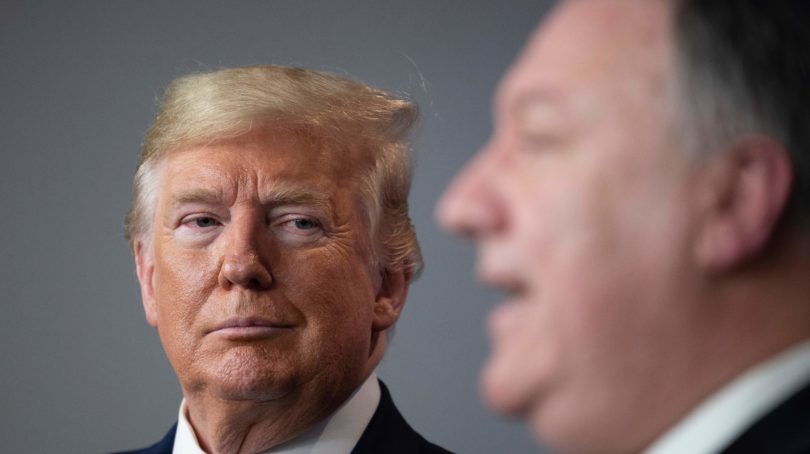 Trump listens as Secretary of State Mike Pompeo speaks during the daily briefing on COVID-19 at the White House on March 20, 2020 (JIM WATSON/AFP via Getty Images)

With reported coronavirus infections on the rise in the United States, our neighbour to the south is—at least for now—on a path to follow the public health catastrophe we have witnessed in Italy. The latest data from Johns Hopkins University has showed a sharp rise in reported cases in the past 24 hours. As of Thursday morning, 7,000 cases had been confirmed; by sundown, the total had climbed to 13,000 and counting.

In fact, the daily reported infections in the U.S. has followed the predictable exponential curve we have seen in other countries, with no signs of slowing down.

The Pew Research Center published its latest poll on the public perception of the virus in the United States and contains interesting pieces of data which may explain why many Americans appear to underestimate the threat of the coronavirus.

Among the poll’s questions, respondents were asked whether the current outbreak could hurt their country’s economy. The data from Pew shows a clear majority of Americans (70 per cent) see the current epidemic as “a major threat” to the U.S. economy:

When we break down the results according to political leanings, we notice both Democratic and Republican voters agree that the outbreak constitutes a major threat to the economy. That proportion is 77 per cent among Democrats and 62 per cent among Republicans—all things considered not a major difference between the political camps.

However, when asked whether the coronavirus outbreak is a threat to the health of the U.S. population, we see a definite divide along partisan lines:

The polarization could hardly be clearer: although roughly half (47 per cent) of Americans agree with the scientific consensus that the virus is a major threat to the health of the U.S. population, that fraction includes merely one-third of Republican voters. In February, as China and South Korea were both going through the worst of the pandemic, and as the number of cases was starting to get out of control in Italy, President Donald Trump repeated that the virus was a “political hoax”, and mocked those who warned of the dangers as “alarmists.” According to the data from this poll, this point of view was apparently shared by many Republican supporters.

We also see a clear divide among respondents when asked about the reaction of the American news media. Pew measured that 62 per cent of Americans believe the news media exaggerated the risks of the coronavirus:

Among Republican voters, this proportion grows to a stunning 76 per cent.

On the flip side, 52 per cent of Americans believe Trump did not take the risks seriously in responding to the coronavirus outbreak:

Unsurprisingly, as is the case with any polling question regarding Trump, the results fall sharply along partisan lines: although half of Americans agree Trump downplayed the risks of the virus, that fraction goes up to 79 per cent among Democratic voters and only 22 per cent among Republicans.

Which raises the question: Is it possible that many Americans do not actually take this pandemic seriously? Even though the Centers for Disease Control (CDC) published clear warnings about the virus’s high contagion rate and offered concise guidelines to prevent its spread, many cities and states still haven’t rung the alarm bell to enforce the needed confinement measures.

Case in point: earlier this week, Florida Governor Ron DeSantis refused to close the state’s beaches, where many thousands of young Americans flocked for spring break:

“If I get corona, I get corona. At the end of the day, I’m not gonna let it stop me from partying”: Spring breakers are still flocking to Miami, despite coronavirus warnings. https://t.co/KoYKI8zNDH pic.twitter.com/rfPfea1LrC

I want you to watch this video and see for yourself the difference between how Paris one of the most touristic cities in the world is taking the Coronavirus threat and how Clearwater Florida is dealing with it so that it doesn’t lose tourism revenue during spring break #Covid_19 pic.twitter.com/CbUCf1VZ2r

As of Thursday night, the state currently most affected by the outbreak is New York, with more than 3,000 confirmed cases, followed by Washington State with a little over 1,200 infections. We will keep a close eye on the progression of the epidemic south of the border to see whether America’s curve will mimic South Korea’s—where the number of new cases has fallen sharply of late—or Italy’s, whose death toll has now surpassed China’s.

Stay safe out there, dear readers. Please listen to experts and scientists.