It's almost like Donald Trump wants to be impeached

Yes, the U.S. president asked a foreign leader in a phone call to help dig dirt on a political rival. So naturally Trump released the transcript. 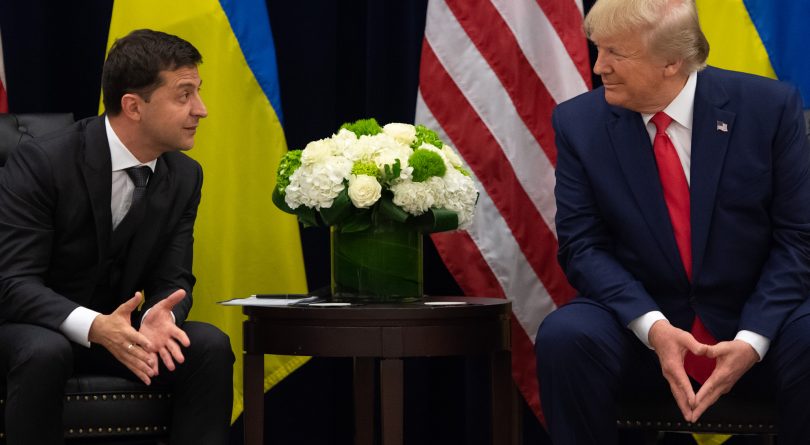 Less than a day after the leadership of the Democratic Party agreed to proceed full-throttle to throttle Donald Trump, the novice Ukrainian leader and former stage comedian who inadvertently may have caused the downfall of an American president already had gained a new nickname across the former Soviet Union: “Monica Zelensky.”

It was Bill Clinton’s own seminal event, of course, that led to his impeachment—and acquittal—in 1998, a scenario that remains the likely outcome of Trump’s prosecution as long as Senate Republicans remain united behind him. No evidence was presented Wednesday that the Grand Old Party was hemorrhaging—au contraire, Rep. Steve Scalise of Louisiana was reported to have raised one million defence-fund dollars at a GOP dinner Tuesday night.

In New York on Wednesday, the home-standing president, after meeting Ukrainian president Volodymyr Zelensky in person for the first time, was defiant—even welcoming—of the siege to come.

“You take a look at that call and it was perfect. I didn’t do it. There was no quid pro quo. But there was with Biden,” Trump declared at a news conference. “There are a lot of very dishonest people. We’re the ones who played it straight, and you know, there are millions of people out there looking at what’s going on. Those people understand it. They see it, and they think it’s disgusting.”

Of his would-be defenestrators, including the current House Speaker, he added: “Our people are being hurt and our country is being hurt when a Nancy Pelosi allows her position to be taken over by radical, far-left socialists, or worse. That’s pretty bad.”

At the United Nations, President Zelensky, whose name means “green” in the Ukrainian language, told reporters, “I think you read everything. I think you read text. I’m sorry, but I don’t want to be involved to democratic open elections. Elections of U.S.A. No. Sure, we had, I think, good phone call. It was normal. We spoke about many things, and I—so I think and you read it that nobody pushed me.”

“In other words, no pressure,” blurted Donald Trump.

But in Moscow, as veteran global-affairs analyst Maxim Yusin of the Kommersant newspaper told Maclean’s, “We feel sorry for our poor brothers in Ukraine, because from now on, Ukraine-gate will replace Russia-gate, and they will suffer what we have suffered for the past three years. It was just a coincidence that it was Ukraine involved on that phone call. It might just as easily have been Pakistan or Peru or Switzerland. But it was Ukraine, and from now on anything that has to do with Ukraine will be toxic. Ultra-toxic.

“Just as with Russia, American foreign policy toward Ukraine has become secondary to domestic policy. No American senator or diplomat or business leader can ever go to Ukraine again without being considered part of this scandal. And America cannot possibly negotiate between Ukraine and Russia because they are so completely pro-Ukraine.”

As evidence of this anti-Russian ardour, the Democrats sent out their designated hitters to meet reporters on Wednesday afternoon, led by Rep. Marci Kaptur of Ohio, Chair of the Ukraine Caucus, who took note of “the damage and horror” wreaked by Russian territorial usurpation in Crimea and the Donbass; Rep. Brendan Boyle of Pennsylvania, who reported that “I have constituents whose family members are being shelled and bombed by the ‘little green men’ of Putin;” and Rep. Nita Lowey of New York, co-chair of the House Appropriations Committee, who proclaimed that, “Unlike his friend Vladimir Putin, Donald Trump is not above the law.”

“When the president withheld money to Ukraine, did that involve President Putin?” hinted Steny Hoyer of Maryland, the Democratic leader in the House.

None of the Republican members of the Ukraine Caucus showed up.

But D.C. Democrats were quick to note that the transcript released on Wednesday morning by the beleaguered White House was just that—a note, or a series of notes jotted hastily by junior aides during the July 25 conversation. Nowhere in the now-public segment of the discussion does President Trump explicitly threaten to withhold the sale of Javelin anti-tank missiles if his Ukrainian counterpart does not proceed with a probe of the Biden clan, but Trump does seem to ask for a token of reciprocity. As Rep. Katherine Clark, Democrat of Massachusetts, told reporters in the Capitol on Wednesday, “The crime is with the quid. The crime is when you ask for a favour.”

As officially released by the White House, the conversation proceeded like quo:

Zelensky: “I’m very grateful to you for that because the United States is doing quite a· lot for Ukraine. Much more than the European Union especially when we are talking about sanctions against the Russian Federation. I would also like to thank you for your great support in the area of defence. We are ready to continue to cooperate for the next steps. Specifically we are almost ready to buy more Javelins from the United States for defence purposes.”

Trump: “I would like you to do us a favour though because our country has been through a lot and Ukraine knows a lot about it. I would like you to find out what happened with this whole situation with Ukraine …  I would like to have the Attorney General call you or your people and I would like you to get to the bottom of it. As you saw yesterday, that whole nonsense ended with a very poor performance by a man named Robert Mueller, an incompetent performance, but they say a lot of it started with Ukraine. Whatever you can do, ·it’s very important that you do it if that’s possible.”

Zelensky: “Yes it is very important for me and everything that you just mentioned earlier.”

During the call, in addition to Attorney General William Barr, Trump inserts Rudolph Giuliani—his personal lawyer, the former mayor of New York City, and “a very capable guy”—into the case. “There’s a lot of talk about Biden’s son,” Trump tells Zelensky. “Biden stopped the prosecution and a lot of people want to find out about that so whatever you can do with the attorney general would be great. Biden went around bragging that he stopped the prosecution so if you can look into it … It sounds horrible to me.”

It was reported on Wednesday that Barr never took any action on the president’s desire that he assist the Ukrainians to gumshoe the Biden caper—an act of omission in harmony with the testimony of several former administration officials who said that they often declined, parried, or just plain ignored Trump’s instructions. The military aid, which had been duly appropriated by Congress, eventually was forwarded to Kyiv.

At the Capitol, “Whatever is going on with this president—the chaos, the disrespect for the rule of law—we stand ready to work with him,” Rep. Katherine Clark said wishfully.

In Manhattan, meanwhile, dutifully attending to the nation’s business, Donald Trump attended a forum on Venezuela that included members of that country’s internationally-recognized but unseated parliament.

“Presidents and leaders of America I thank you because we are close to victory,” one of them told Donald Trump. “People of Venezuela won’t ever forget your leadership.”