Something has gone wrong with America

Scott Gilmore: America’s pride in itself just hit a new low, according to a new survey. On this July 4th, it's not hard to see why. 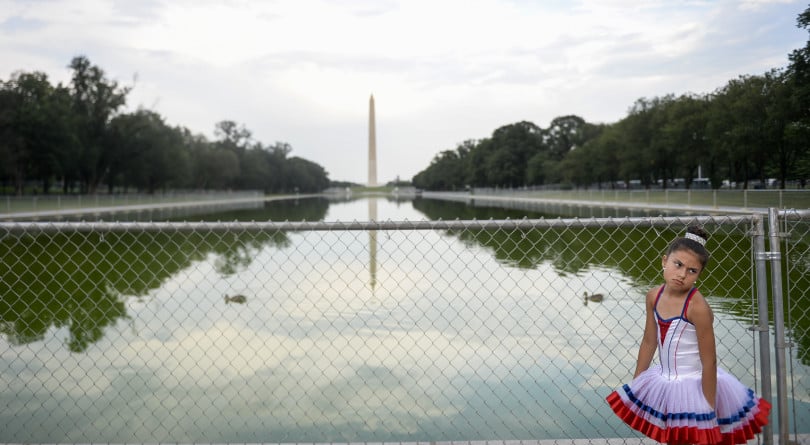 A visitor stands in front of temporary fencing installed along the National Mall on July 2, 2019, for President Donald Trump's 'Salute to America' event at the Lincoln Memorial (Caroline Brehman/CQ Roll Call)

I am in New York right now, and the other day I watched a local cable news anchor cry on television. She was reading from her teleprompter, about a leaked report drafted by inspectors from the U.S. Department of Homeland Security. It revealed migrant children are being detained without their parents, without blankets, without warm meals, without even soap. Eight-year olds are looking after two-year olds. Halfway through the segment, the anchor’s voice cracked. Her eyes teared up. As she composed herself, the producers cut to a reporter, live on location.

There’s a surprising new Gallup poll out. It reports that America’s pride in itself has, for the second year in a row, reached a new historic low. Some of this is partisan. The data shows Republicans are far more proud of their country than Democrats are. But Americans of both stripes have experienced a gradual and mostly continual decline for the last 15 years.

Perhaps more telling, the poll shows a dramatic difference between younger and older Americans. While 60 per cent of seniors are proud to be American, less than a quarter of millennials are willing to say the same thing.

Why has the United States lost its self-confidence? In many ways this remains a red, white, and blue world. In the fields of science, the arts and business, American voices continue to dominate. And the great and the good from far and wide are still more likely to migrate to New York than to London or Beijing.

English remains the global lingua franca thanks more to Lady Gaga than to Her Britannic Majesty. There is a seat reserved for Washington at every diplomatic conference table. The United States military, deployed in over 150 countries, stands utterly unrivalled. And more patents are filed in the U.S. than anywhere else.

Domestically, crime rates have been falling for 30 years. The stock markets have been climbing straight up for a decade. And unemployment rates haven’t been this low since the 1960s.

And, Americans, according to Gallup, recognize much of this. Over 90 per cent take pride in their nation’s scientific achievements. The military and arts and culture are equally valued. But, that faith falters in regard to its health care system and its politics, which score only 37 per cent and 32 per cent respectively.

It is easy to understand why these two issues should weigh so heavily on the American mind. In spite of the Obamacare reforms, 28 million Americans still have no health insurance. Legislation proposed by the Republican Party, but stalled repeatedly in Congress and in the courts, could increase that number by another 21 million.

As unlikely as it seems to outsiders, in the United States even something as simple as a broken arm can bankrupt a family. Another Gallup poll late last year reported 70 per cent of Americans believe the health care system has “major problems” or is in a “state of crisis,” and 30 per cent are foregoing medical treatment because of the cost.

And it is not just the cost of health care that has American’s worried, the quality is also a problem. Life expectancy rates already lag behind most of the western nations and is actually falling. In the past two decades maternal mortality rates have doubled—mothers are now more than three times more likely to die during birth in the United States than in Canada. And the OECD calculates that the U.S. has some of the worst rates of medical, medication and lab errors; and its “disease burden,” a measure of the number of years lost to disability and premature death, is significantly higher than any other comparable country. In other words, if you live in the U.S. you are far more likely to live sick and die young.

But it is unquestionably the political system that weighs heaviest on American minds. The partisan polarization of American legislative bodies and the public is well documented. The Pew Research Center has carefully tracked this growing ideological divide, which has pitted citizen against citizen, and in many cases, families against each other. One-third of Republicans and Democrats believe members of the other party are “a threat to the nation’s well being.”

This polarization is vividly present this July 4 holiday in Washington. The Republican president has organized something akin to an election rally on the National Mall, with private stands, his own fireworks display, and a few tanks for show. Democrats are predictably outraged and the news is filled with op-eds about “creeping fascism” in America.

Perhaps this crisis of pride and national identity should be no surprise. I don’t know if America has lost its way, but I do know that most Americans believe it has. Which, you could argue, means it objectively has. If your nation is split, if the holidays have become battles, if federal policies reduce news anchors to tears, something has gone wrong.