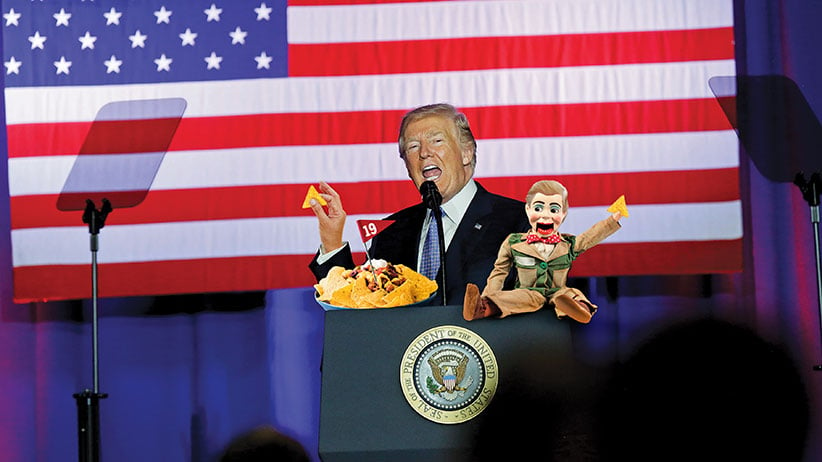 Let’s read between the lines of Donald Trump’s recent speech on his tax plan. The President’s words are in bold.

We’re here today in Indiana to announce our framework to deliver historic tax relief to the American people. “Who’s ready to hear some real whoppers?!”

Indiana is an example of prosperity unleashed. It’s time for Washington to learn from the wisdom of Indiana. Indiana wisdom: 1. Ventriloquists are hilarious. 2. You can never have too many Applebee’s. 3. Corn!

It’s time to take care of our people [and] rebuild our nation. “Except for Puerto Rico. Those indebted layabouts had it coming.”

We need Washington to promote American jobs. That is what I have been working to achieve every day since I took office. “Why, barely a weekend has gone by when I haven’t worked tirelessly to promote jobs in the field of making me a plate of post-golf nachos.”

There’s never been tax reform like what we’re talking about. “No president before me has had the foresight to make hoods and robes tax deductible for all Klan members.”

READ: What ‘Teleprompter Trump’ really meant to say was…

Those caring for the elderly loved—and we love these people, but we’re caring, and we take such care of the elderly and other adult dependents—will receive financial relief. “Me make also tax credit for English speak good.”

[The wealthy] can call me all they want. It’s not going to help. I’m doing the right thing, and it’s not good for me. Believe me. “Believe me. Trust me. What reason have I ever given you to think I might lie?”

[At] the United Nations, I was told by one of the most powerful leaders of the world that they’re going to be announcing five major factories in the U.S. “The prince of Nigeria also told me via email about a very exciting money-making opportunity.”

We want more products proudly stamped with those four beautiful words: Made in the U.S.A. “In unrelated news, I implore you not to look at the tag inside my Trump-brand tie.”

You know, it’s one thing when we want a health care and they want a health care, and there’s a dispute. With the power of hindsight, we can see that Trump’s efforts to repeal Obamacare may have been undermined by his belief that “a health care” is an object of some sort.

But here’s something everybody wants and they can’t do it. So you can tell you, there’s a broken system in D.C. “You go ahead and tell you that. I’m pretty sure that both yous will tell the other yous that both them and they are right.”

READ: Donald Trump on what really caused the solar eclipse

We released some details of the tax reform, and it has really received tremendous, tremendous reviews. “This is a fiscal disaster” (Ronald Reagan’s budget director). “Multi-millionaires will get more than $700,000 back—the poorest fifth will get $60” (the non-partisan Tax Policy Center). “It’ll stimulate the economy. Rich people will end up buying boats.” (Sean Hannity, Fox News).

Many years from now, our children and our grandchildren will remember this moment in history. “From the underwater downtowns of the West Coast, to the radioactive badlands of the East Coast, these young Americans will talk endlessly of my failed tax proposals when not otherwise hunting each other for food.”

After 12 years, this is my final column for Maclean’s. Thanks for reading.

RELATED: The best of Scott Feschuk