The horsefly around Donald Trump's head

Allen Abel: Trump was cruising to a speedy, comfortable end to his Senate trial, until an angry ex-hire with a grudge busted it all to hell 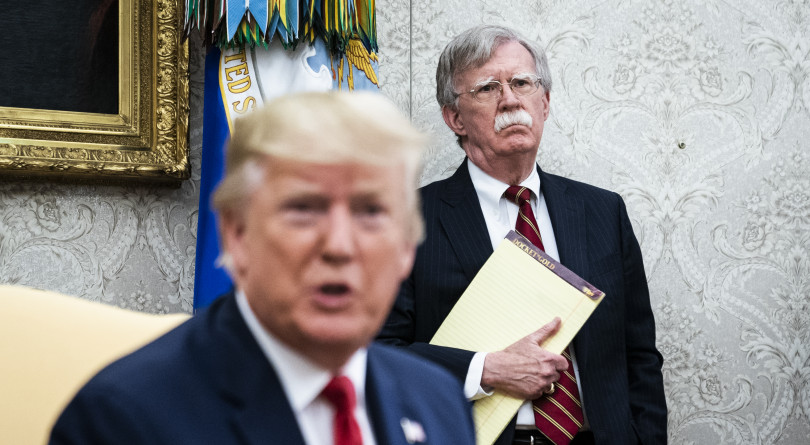 Bolton watches on as Trump meets with Prime Minister of the Netherlands Mark Rutte in the Oval Office on July 18, 2019 (Jabin Botsford/The Washington Post via Getty Images)

“Look, I don’t expect anyone to feel sorry for me, but the fact is, I’m only human,” Donald Trump wrote in a book called Time To Get Tough during the Barack Obama regime. “Years of striving for perfection go into creating an image, but just a few potshots from some jerks with word processors can tarnish a reputation.”

Now it was a Tuesday in the 2020s and Trump was into his fourth year as the 45th U.S. president and he was bringing peace to the Middle East, or at least making a serious stab at it. He had ripped up “the worst trade deal in history” and was a day away from signing a brand-new NAFTA. The Little Rocket Man in North Korea hadn’t atomized a single soul since the perfectionist took over the Oval Office, except maybe for some troublesome members of his own family.

The Iranian mullahs’ go-to general and the mikado of the Islamic State were dust. More Americans had a job than ever before; the Chinese communists were sitting down to talk tariffs; and the stock market was shaking off the Wuhan Flu. The Mexican army was shoving thousands of Central American emigrants back into the Usumacinta River, no wall across Texas required.

It could have been as good a moment as a president gets. But an angry ex-hire with a grudge and a word processor was busting it all to hell.

READ MORE: The Trump book you didn’t hear about but is the most devastating yet

The horsefly was John Bolton, the former national security adviser who once was described by a Democratic senator as “an extremist and reckless partisan” and by an official of his own party as “by far the most dangerous man we had in the entire eight years of the Bush administration,” whose hiring by Trump was tantamount to “an invitation to war . . .  perhaps nuclear war.”

No mushrooms had clouded the sky, so far, and Bolton had been purged from the Situation Room, to become just another skeleton on the towering bone pile of former Trump confidantes. But now, reduced to the rank of a rank outsider, Bolton allegedly was reporting in a first draft of a new confessional that Trump specifically held back military assistance from the government of Ukraine last summer because he wanted an investigation of Joe and Hunter Biden’s dealings in that country.

Someone from the White House or the National Security Council had shovel-passed this football, of course, to The New York Times, the town crier of the anti-Trump “Resistance.” As of Tuesday afternoon, Bolton’s yet-unseen The Room Where it Happens already was ranked as the number-one bestseller in Political Science on amazon.com.

In the Trump years, hell hath no fury like an author on pre-sale.

The timing of the revelation was curiously precious—right in the middle of the president’s trial in the Senate on charges of abuse of power and obstruction of Congress.  In fact, until the Bolton blockbuster hit the streets last weekend, the ritual bullfight seemed to be nearly over and the president’s “So what? Get over it” defence clearly was winning the day. The Republican majority in the Senate was cohering, and Rep. Adam Schiff’s repetitive harangues that Trump had acted “for corrupt purposes and personal benefit,” that he was “a threat to national security,” and that his presidency was “grossly incompatible with the rule of law” was crashing against the law of diminishing returns.

After a couple of days of respectful decorum with the Chief Justice in the chair, Senators got up and walked out, sneaked candy into their desks, goofed around with fidget spinners and passed notes and giggled and picked their noses and worked crosswords and unabashedly fell asleep. Few members of either party reckoned that Donald Trump was up Schiff’s Creek anymore. The august Chief Justice played no material role in the proceedings at all.

Tuesday, the trial continued. The Republicans’ lawyers, in particular, droned so monotonously that they might as well have been speaking Swedish. By mid-afternoon, barely 20 of the 100 seats in the press gallery were occupied. Mister Smith Goes to Washington, this wasn’t.

To the Democrats, Trump’s misdemeanours had been “unprecedented, categorical, and indiscriminate.” He had schemed, Schiff snarled, “to arrogate to himself the investigation of his own conduct.” Leave him in office–even if only until November, when the 50 states shall have their say–and “he will remain a threat to the Constitution.”

On Tuesday, as they concluded their defence, White House lawyers inverted this argument completely; the president, they said, was the Constitution–“He, alone, is an entire branch of government!” argued Patrick Philbin, one of Trump’s chosen defenders.

He was “the sole organ of the nation in foreign affairs,” Philbin said, authorized to stand in the East Room with the criminally-indicted Benjamin Netanyahu and to proffer what he called “precise technical solutions to make Israelis, Palestinians and the region safer and much more prosperous.” And to give or take aid to the Ukrainians–or the Afghans, or the Hondurans, or the Guatemalans—as he, and only he, saw fit.

“As I have seen throughout my long career as a dealmaker, complex problems require nuanced, fact-based remedies,” Donald Trump said Tuesday with the Israeli leader by his side..

At the exact same hour in the Capitol on Tuesday, Trump’s lawyers were maintaining that facts were anything but a remedy for the president’s accusers. Jay Sekulow repeated the declaration made by Alan Dershowitz the previous evening–“even if there was a quid pro quo–which we have proved there was not–nothing in the Bolton revelations are true, but even if they are true, they would not rise to the level of an impeachable offence.”

If the goalposts move this much at the Super Bowl, it’s going to be damned tough to make an extra point.

“Put yourself in Donald Trump’s shoes,” the defence counsel said, more than once, playing the sympathy card. (“To many people, Donald Trump isn’t a flesh-and-blood human being anymore. Instead, I’m a symbol–of wealth, fame, egotism, greed, and probably several other not-so-nice things,” the misunderstood pacifist sobbed in Time To Get Tough.)

“If partisan impeachment is now the rule of the day,” said Sekulow–and of course it is, and always has been, in Trump’s case–“future presidents will be paralyzed even before they take the oath of office.

As the day ended, and with a vote looming on whether to call Bolton to testify in public, or to give a private deposition, or at least to give every senator an autographed copy of The Room Where It Happens, the two parties were retreating to their respective solitudes.

“Even if Bolton testifies, if the ‘So what’ defence holds and the president is acquitted,” a Maclean’s correspondent asked Chris Murphy, Democrat of Connecticut, during a break in the trial, “does that mean that the House brought you the wrong articles of impeachment?”

In other words, even when this is over, it won’t be over. Innocent will mean guilty, and the Resistance will roar again. Trump saw it coming.

“The publicity gradually dehumanizes you,” he wrote, what seems like a lifetime ago. “Reality never seems to get in anyone’s way.”