You might not expect to find poetry in a president's speech to a room of police chiefs. But it's impossible not to see it in Trump's remarks. 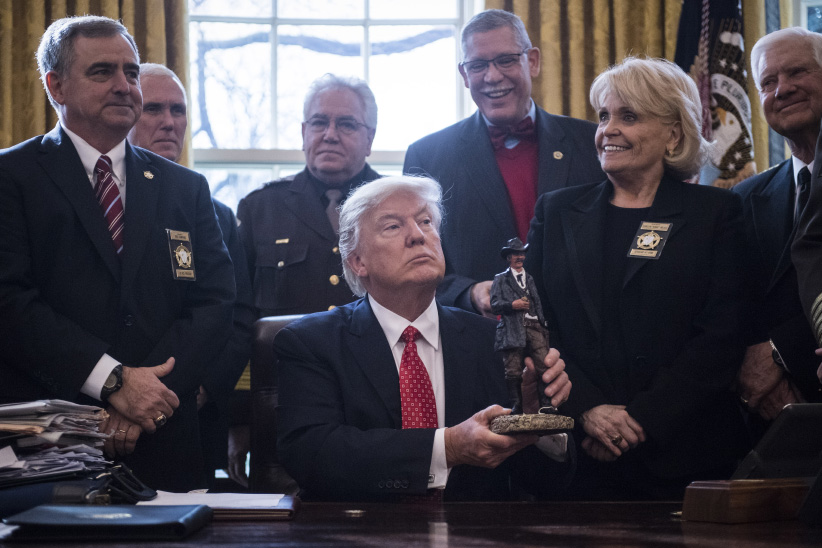 President Donald Trump holds a figurine given to him by a group of county sheriffs in the Oval Office of the White House in Washington, DC on Tuesday, Feb. 07, 2017. (Jabin Botsford/The Washington Post/Getty Images)

Apart from the titles, these are the words of Donald Trump—taken directly from his Feb. 8 speech to the Major Cities Chiefs Police Association. You can read the last volumes of Trump poetry here.

Can I Be a Lawyer?

You can be a lawyer

or you don’t have to be

“Whenever the President finds that the entry of any aliens”

— okay, the entry of any aliens

“or of any class of aliens”

— so any aliens, any class of aliens

“into the United States”

“suspend the entry of all aliens”

— okay, so you can suspend the aliens

and a very good man

We are doing our job

We are doing our job

Things We Knew and Do and Did

We totally knew about it

We knew about everything

We do things well

We did things right

I was a good student

Better than I think almost anybody

Use It, Unless You Can’t Use It, in Which Case Use It

I said to my people:

Why don’t you use the Boston case?

And there were reasons

why they couldn’t use the Boston case

But use the Boston case

I can read the polls

maybe better than anybody

because it seems that I understood the polls

a lot better than

many of the pollsters understood the polls

assuming they were honest polls

which I think probably many of them weren’t.

I really believe that.

I will say this:

We will give him a wall

And it will be a real wall

The wall is getting designed right now

A lot of people say:

Trump was only kidding with the wall

and they say I was kidding

I can tell you

No we will have a wall

It will be a great wall

Last year in Dallas police officers were targeted for execution

Who ever heard of this?

They were targeted for execution

These heroic officers died as they lived

risking their lives for people they did not even know

Hats off to you people

You know the illegals

You know them by their first name

You know them by their nicknames

You have that power

You’re in the neighborhoods

You know the bad ones

You know the good ones

I want you to turn in the bad ones