The new NAFTA: This is every chapter in the agreement

The new agreement between Canada, the U.S., and Mexico includes 34 chapters and 12 side letters. There's lots of fine print. 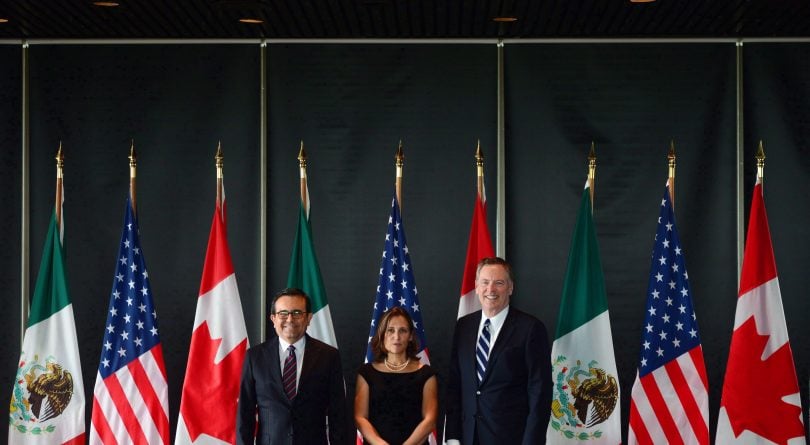 Minister of Foreign Affairs Chrystia Freeland meets for a trilateral meeting with Mexico's Secretary of Economy Ildefonso Guajardo Villarreal, left, and Ambassador Robert E. Lighthizer, United States Trade Representative, during the final day of the third round of NAFTA negotiations at Global Affairs Canada in Ottawa on Wednesday, Sept. 27, 2017. A moment of truth approaches in the NAFTA negotiations, with the coming days likely to reveal not only whether an agreement is achievable this year but also how extensive such an agreement might be. THE CANADIAN PRESS/Sean Kilpatrick

After many rounds of frustrating, slow-moving negotiations and a Donald Trump-imposed deadline looming large, a new NAFTA came together late in the evening on the last Sunday in September. The new deal comprises 34 chapters and a dozen side letters. The Office of the United States Trade Representative has posted the text of the deal. Browse the agreement’s table of contents below.

8. Recognition of the Mexican State’s Direct, Inalienable, and Imprescriptible Ownership of Hydrocarbons

3. United States-Mexico Side Letter on Biologics

4. United States-Mexico Side Letter on Prior Users

6. United States-Canada Side Letter on Wine

7. United States-Canada Side Letter on Water

8. United States-Canada Side Letter on Guidelines for Research and Development Expenditures, 2004