Paul Wells: An army of experts with real-world experience is ready to flood into Washington, in a system of public service that Canadians could envy 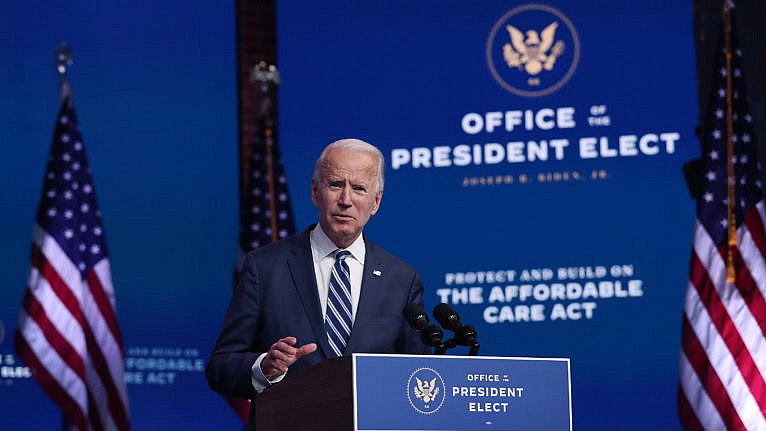 Biden addresses the media about the Trump Administration’s lawsuit to overturn the Affordable Care Act on Nov. 10, 2020 at the Queen Theater in Wilmington, Delaware (Joe Raedle/Getty Images)

I tend to agree with author Timothy Snyder, who argues that Donald Trump’s refusal to acknowledge the thumping defeat he has suffered is not a trivial tantrum. If the President could make it stick, he would cancel the election and continue to—I was going to say continue to govern, but of course I mean continue to sit in the White House saying and doing stupid things.

I don’t believe Trump can make his cancellation of a presidential election stick. I believe he will be forced to concede before Jan. 20, and to throw together some cartoonish imitation of good grace when he does it. But his attempted dismissal of the electorate is damaging—to democratic legitimacy, to the rule of law, to the validity of the already badly frayed American example in the world.

How damaging depends on how long this drags out. On Tuesday Joe Biden didn’t sound particularly fussed that the General Services Administration hadn’t declared him the victor and authorized a formal transition process. There’ll be time later to ring alarm bells, if the Trumpian foot-drag continues. In the meantime I wanted to talk about the transition players who are waiting in the wings, and to compare the American and Canadian ways of deploying talent in and out of government.

On Tuesday the Biden-Harris transition announced the Agency Review Teams that will be briefed on the state of government operations, if the briefers ever receive permission to brief them. This is not a small list: it identifies teams who’ll be sent to 39 different departments and agencies, with up to 30 people on each team. Hundreds of names in total. Most are volunteers. A few are paid from Biden-Harris campaign funds. Many, though not all, will go on to jobs in the new administration.

These transition exercises happen every time a new president comes in. There are laws requiring each government to spend much of an election year preparing briefing material for a new government, even if the incumbent president intends to campaign for re-election. There’s a think tank that studies transitions. The stakes are not low: the 9/11 Commission Report blamed the rushed transition after the 2000 Florida hanging-chad election for some of the incoming Bush administration’s lousy preparation against terrorist attack. In 2008 Bush ordered his staff to give the new president, whoever that turned out to be, a thorough and professional welcome; there’s a book about how smoothly the Bush-Obama transition went.

There’s also a book about what a magnificent cock-up the Obama-Trump transition was, and guess whose fault it was. Obama, impressed by the welcome his team got from Bush, signed a law ensuring even better preparation for presidential transitions. (One of the senators who introduced that bill a decade ago, Ted Kaufman, is now running Biden’s transition.) But Michael Lewis, in his book The Fifth Risk, describes how Trump fired his transition director, Chris Christie, before the election because Jared Kushner had a grudge, and replaced Christie with nothing useful.

So there’s the magnificent early chapter in Lewis’s book in which the staff of the U.S. Department of Energy—whose responsibilities include safeguarding U.S. nuclear weapons and figuring out how to dissuade countries like Iran from getting any—sat waiting, on the day after the 2016 election, for the Trump “agency review teams” to arrive. They’d cleared 30 desks and 30 parking lots for the newcomers. And nobody showed up. Not on the first day or the day after. Not at Energy or Housing and Urban Development, not at the National Endowment for the Humanities or the Department of Homeland Security. A few did show up at State, but the briefings that had been prepared were classified and nobody Trump’s staff sent had security clearance.

Biden’s review teams suggest he’s more old-fashioned about these things, and the names on the list are a reminder of the remarkable bench strength of the U.S. public-policy elite.

This time there are people ready to show up at the Department of Energy, if they’re ever invited, and that team is led by Arum Majumdar, a mechanical engineer and physicist who holds about a dozen titles at Stanford University and was the first director of ARPA-E, an Obama-era effort to develop new sources of clean energy.

The transition team at the Department of Education will be led by Linda Darling-Hammond, who runs the California State Board of Education, which teaches 6.2 million children. She was considered for the job of education secretary under Obama and was rumoured for the same job under Biden, but she’s already said she wants to finish her work in California instead of moving to Washington.

The team waiting for an invite to the Pentagon will be led by a frequent visitor and longtime senior staffer, Kathleen Hicks, who holds the Henry A. Kissinger Chair at CSIS, one of the biggest foreign-policy think tanks. Among the books she’s co-authored are one on deterring China’s military buildup in the South China Sea and another on keeping a lid on Iran’s nuclear ambitions.

At the department of Labor, the team leader is Chris Lu, a Harvard classmate of Obama’s who led the 2008 Obama transition. At the Consumer Financial Protection Bureau, which was set up at Elizabeth Warren’s urging in 2010 to protect consumers against predatory lenders, it’s Leandra English, who was the bureau’s second-in-command until Trump decided he’d prefer to have the organization protect predatory lenders against consumers. She sued to keep her job against Trump’s appointee, lost, and awaits her revenge.

It would be silly to claim this cadre is innocent of politics. Many are lifelong Democratic activists, most have government experience in Washington, all are sympathetic to the incoming president-elect. But they also have deep expertise and an abiding belief that government is worth understanding in all its complexity. The Republicans used to field their own experts, when they won elections, and may yet one day decide to do so again. In the meantime this feels like a return to competence, suspended unnecessarily in time, waiting to kick in. Competence is no guarantee of success, but like Biden I’m almost sure it can help.

One more thing. The reason these elaborate transitions are necessary is that the U.S. public service is staffed, much more deeply than Canada’s, by political appointees. Here we have a quasi-permanent public service and a pretty light (well, relatively light, compared to the U.S.) sprinkling of political staff. Ian Shugart, who’s Clerk of the Privy Council under Justin Trudeau, was deputy minister to Pierre Poilievre when Poilievre was the Conservative employment minister in 2015. Here a deputy minister is almost always a career civil servant. Down there, an undersecretary, and several layers reporting to her, are partisan appointees.

We usually see this state of affairs as a Canadian advantage, and the rush of armies in and out of Washington jobs as a quaint relic of a less civilized age. But here’s the thing. I read dozens of biographies of these members of the Biden transition, and while it’s true that most of them used to work for Obama or Bill Clinton, they’ve had to spend the last several years out doing useful things in some corner of the real world. Very few of them have been lobbying, even though by my reading of the relevant rules, most of them wouldn’t have been barred from it. Instead they’ve been in universities, think tanks, labour unions, social-service organizations, pressure groups, and, in many cases, private business.

It’s almost got me thinking that the U.S. system forces more of that country’s public service to get out, see the world, and put its expertise to use addressing real-world problems and opportunities. And then, when their team gets back into power, to bring fresh real-world perspective back into government. It’s hardly fashionable to view the U.S. as a model for anything, and it’s not usually my habit, but I found myself envying a country where the barriers between public and private activity are sometimes more permeable.