The unmasking of Donald Trump

Adnan R. Khan: As Trump's poll numbers plummet, a desperate U.S. president reveals his true colours, and finds theatrics can only take him so far 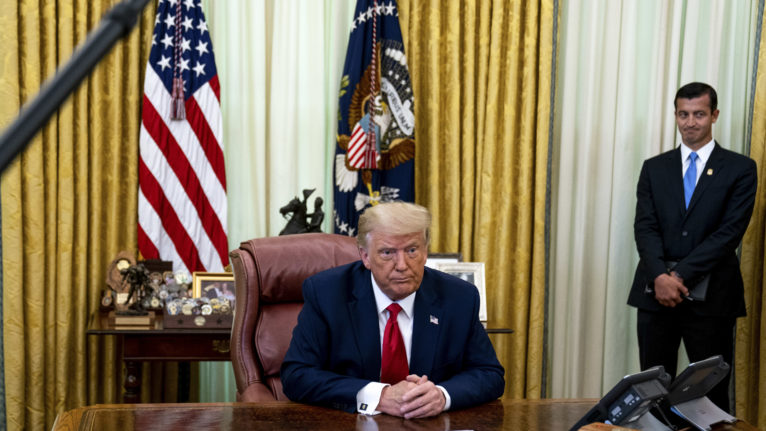 In 1997, Mark Singer, a staff writer at New Yorker magazine specializing in profiles, was tasked with what many today would chalk up as a literary suicide mission: Follow Donald Trump and find out what makes him tick.

At the time, Trump was, at least according to his own accounts, at the top of his real estate mogul game, which is likely why he agreed to the profile in the first place. A few years earlier it likely would never have happened: the Trump Organization was on the verge of collapse, mired in debt and facing bankruptcy.

By 1997, it had not only survived, but Trump was doing better (which in his mind can only mean richer) than ever. He’d re-financed his failing hotels and casinos division with a successful public offering, netting himself $7 million in 1996 in salary and bonuses (even while the value of the shares was tanking).

Singer, not known to shy away from challenges, embarked on weeks of research, shadowing Trump in what ultimately reads like an otherworldly jaunt through the crass Wonderland that is Trumpworld, complete with mobsters, Hollywood stars and shady businesspeople.

At the centre of the story, of course, is the shadiest of them all, Donald Trump who, among other pulp fiction character traits, Singer describes as “the hyperbole addict who prevaricates for fun and profit” and “the perpetual seventeen-year-old who lives in a zero-sum world of winners and ‘total losers,” loyal friends and ‘complete scumbags’.” Trump, Singer concludes, is “a fellow both slippery and naïve, artfully calculating and recklessly heedless of consequences.”

READ MORE: What Americans don’t know should worry us

Somewhere in that riot of egos, one must assume, was the real Trump, though Singer conceded in the end that he had failed in his mission to find him. He did claim, however, to have unearthed something even more astonishing and rare: “an existence unmolested by the rumblings of a soul.”

In some ways, Singer’s profile aligns neatly with the Trump we’ve all come to know as the American president. His penchant for exaggeration and outright lies, his visceral loathing for journalists who write stories he doesn’t like—this is just Trump, and he hasn’t changed, even after a quarter of a century.

But in other ways, something has changed. The “artfully calculating” Trump of 1997 has gone missing, replaced by a clumsy, sometimes pitiful novice who can’t seem to formulate any cohesive strategy. Singer’s “slippery” Trump, the man who has dodged bankruptcy and the IRS for decades, who has shifted his political position so often that his politics resembles a mosaic cobbled together by a 4-year old, is now noticeably stickier, more ranting Republican of the deep south Confederate variety than the slick Wall Street free marketer he pretends to be.

As a businessman, even as incompetent as he was, Trump had been able to maintain the illusion of invincibility. The masks never came off. Even when it seemed like he was on the verge of being outed as a shyster, he stayed in character, forever the bigwig blessed with a golden touch. But as president, the opposite has happened: he has been steadily unmasked.

Is it a function of increased scrutiny? Despite his enablers—Attorney General Bill Barr and Republican members of Congress who continue to throw up smoke screens to protect a man they see as their best chance to reverse the tide of liberalism they believe is threatening to destroy America—Trump can’t completely avoid the oversight that comes with being president, particularly with a Democratic-controlled House of Representatives. Or maybe it’s just plain old age. Trump’s lifestyle, his eating habits, lack of exercise and any meaningful intellectual stimulation is a perfect recipe for cognitive decline.

Whatever it might be, what we’re seeing now is not the same fit and agile Trump who is pictured in the 1997 New Yorker profile. We’re seeing past that glittery veneer at an angry man-child, the inevitable outcome of an upbringing poisoned by privilege and racism. The more he fails— against the pandemic, against America’s racial reckoning, against the polls—the more desperate he appears to become, and the more transparent.

The fact is, Trump has always been a racist. We’ve seen glimpses of it over the years, for instance in the early 1970s when the U.S. Justice Department filed a lawsuit against Trump, his father and the property management company they co-owned for allegedly discriminating against prospective Black and Latin American tenants. It was not the first time the Trumps had been called out on their racial bias and, unsurprisingly, they not only denied the charges but countersued, enlisting Roy Cohn, Senator Joseph McCarthy’s infamous legal attack dog during the anti-Communist purges in 1954. After the presiding judge rejected the countersuit and ruled that there was enough evidence to proceed on the charges of discrimination the Trumps decided to settle.

Somehow, that history has been largely buried, though David Cay Johnston, an investigative journalist who has covered Trump and his business dealings since the 1970s, re-hashed it in his 2016 book, The Making of Donald Trump. Over the years of his presidency, major news outlets like the New York Times and Washington Post have also dug deep into Trump’s history and uncovered piles of past wrongdoings.

Johnston, however, with some justification, still blames the media for failing to properly report on Trump in 2016, ultimately helping him win the White House.

“Donald Trump knows that so long as he never corrects himself or acknowledges error, journalists will quote what he says,” Johnston told me recently. “That’s why George Lakoff, the cognitive research professor at UC Berkeley argues journalists who cover Trump should use what he calls a truth sandwich. Instead of quoting Trump and then taking it apart, you should say: ‘We’re about to tell you something Donald Trump said that is’ —depending on the appropriate word—’dubious’ or ‘a flat out lie’, etc. Then you quote him and after that, you take it apart. That way, people are psychologically set up to understand that what you’re hearing is not revealed truth.”

Indeed, journalists themselves now admit they dropped the ball in dealing with the deluge of misinformation that poured out of Trump during the 2016 presidential campaign. This time around, they seem better prepared, challenging Trump whenever he makes himself available to the media.

Typically, Trump has responded by making himself less available. His most recent appearance, a press conference on July 14 where he was supposed to announce additional sanctions against China, devolved into an hour-long incoherent rant on everything from Joe Biden’s alleged lack of mental acuity to a redux of his 2016 claim that killer immigrants are crossing into the U.S. from Mexico. He answered questions for all of six minutes before abruptly walking off the stage.

Increasingly, a cornered Trump is turning to those people most like him, a segment of the American population lashing out at the prospect of losing its privileged position, of having to compete on an equal footing with immigrants and people of colour, with homosexuals, queers and the gender fluid. The dream for most of us—a world where the colour of your skin or the clothes you wear has nothing to do with your life prospects—is a nightmare for them.

What’s frightening is that this is still such a large segment of American society—somewhere around one-third of voters. But despite its size, it’s not going to be enough to hand Trump a victory in November, and it seems to be dwindling. The latest Gallup poll reinforces what we suspected all along: In the 2016 election, Trump relied on a sizeable cohort of voters who, after the 2009 financial crisis, had lost faith in the American political system. They were tired of politicians—Barack Obama included—who promised to revive the American Dream but then, in times of crisis, went on to dole out sweetheart deals to corporations and their CEOs.

For a wide range of regional and idiosyncratic reasons, those people, including some Obama voters, decided to give an outsider like Trump a shot. Now that Trump has been unmasked, these same people are fleeing Trump’s dystopia in droves. In every demographic—gender, age, race, education or region—the percentage change in support for the U.S. president from January to July is negative. Trump has alienated nearly everyone who can be alienated.

Instead of shifting tactics, Trump has decided to double down on those core supporters, the people he himself most identifies with. As a businessman, he was able to dissemble his way out of most tight spots. But as a politician, Trump is quickly discovering that theatrics can only take him so far. With all of the hustling stripped away, what’s left is a hollow ideologue grasping for approval from those who see the world the way he does.

Finally, we are seeing the real Donald Trump, and it is a sad, frightening, unhinged image indeed.