Anne Kingston: And we're about to relive the Inauguration attendance lies again, too. 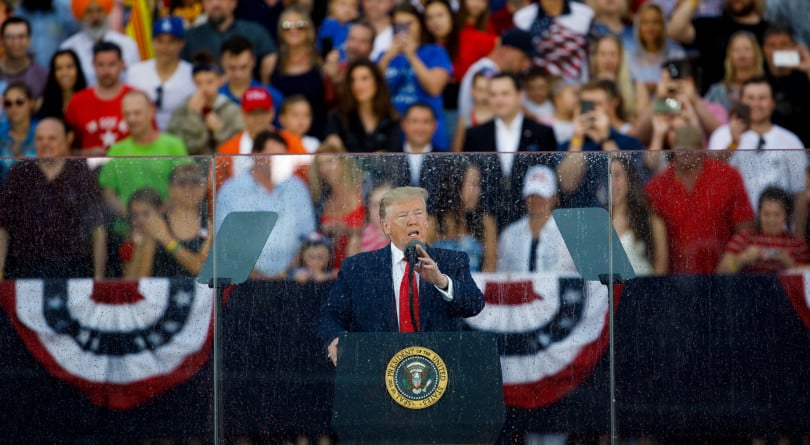 Did Donald Trump—or any of his aides—tune into the Handmaid’s Tale last week? That question ran through my mind watching the U.S. president’s failed attempt to turn July 4th into a simulacrum of the Nuremberg rally. Like Trump’s speech, read from teleprompter behind a bulletproof screen that appeared to be weeping in the rain, the TV show was set at the Lincoln Memorial. The fictional program used the site to harrowing iconographic effect in a rally scene: the statue of Abraham Lincoln was headless after a nuclear war rendered the U.S. a theocracy with women serving in subsidiary roles, and prominently as reproductive vessels. Handmaids in red and white costumes, thousands of them, lined the mall.

It was a spectacle that far exceeded anything seen during Trump’s overly anticipated “Salute to America” parade. The former reality show star clearly had no Leni Riefenstahl, or even an HBO director, to stage manage. Fears America would see some sort of Soviet-style military parade now parroted by authoritarian leaders in China and North Korea didn’t happen, despite images of tanks entering the capitol on flatbeds. Nor did Trump come close to replicating France’s Bastille Day parade, whose origins he clearly didn’t understand, said to inspire the July 4 events. Yes, military planes plumed white smoke in formation, a sight familiar to anyone who has attended an air show.

And yes, there were repeated shout-outs to military might. The overall result, however, exposed a president denuded by removal of his own arsenal of hatred, bullying and mockery.  Trump was constrained in what he could say. He couldn’t allow the Independence Day event to turn ‘partisan,’ even as VIP tickets had been given to donors and GOP stalwarts—any mention of Democrats would result in an ethics violation.

Supporters in the crowd in their MAGA hats appeared confused: “USA! USA! USA!,” they chanted intermittently, lost without a target. When would Trump command the crowd to turn their fury on the media pen?  Where was his “Lock her up?” attack on Hillary? Why was he giving shout-outs to women’s suffrage, or civil rights, or the American victory over Nazis?

Trump mostly kept  his focus on military heroes, the battles and the battles won—with little mention of the values the soldiers were defending. This being Trump, there were major clangs almost calculated to send Twitter atwitter. For one, he suggested the army took over airports during the Revolutionary War. For another, Alexander Graham Bell invented the telephone in the USA, he said.

The president’s shout-out to Gold Star families also triggered memories of his own bigotry toward the family of U.S. Gold Star soldier Humayun Khan, and his disrespect for the late Senator John McCain. Trump celebrating the heroic bravery of the military, and calling for people to enlist, was the president at his most hubristic given his own draft-evading history due to alleged “bone spurs.”

Even when Trump wasn’t focused on the military there were problems. His congratulation to a woman who helps hurricane victims reminded us of his savage treatment of a ravaged Puerto Rico. He proved himself a president unable to make an inspiring rallying cry for national achievement, short of planting the American flag on Mars. As always, the dog-whistles, though muted, were there. “We are one people chasing one dream and one magnificent destiny,” Trump said, a line that rejects American diversity and unprecedented political polarity. So did: “We are all made by the same Almighty God.”

Of course, all Trump cares about, in the end, is the ratings, the numbers. Tellingly, the White House webcam was shut down and removed from the White House website to avoid assessing the crowd, or lack of it. That suggests we’re about to relive the Inauguration attendance lies again. But something happened on Independence Day to Donald Trump and his rained-upon parade. He showed himself a bad, sad showman in a town where show is everything, and that’s something people don’t forget or forgive.