John McCain, Mitch McConnell and Paul Ryan were among prominent Republicans who distanced themselves from Trump's press conference with Putin 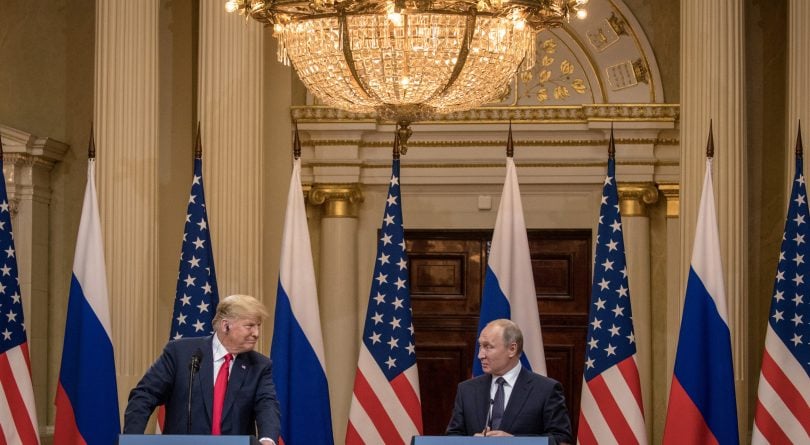 HELSINKI, FINLAND - JULY 16: U.S. President Donald Trump (L) and Russian President Vladimir Putin speak to the media during a joint press conference after their summit on July 16, 2018 in Helsinki, Finland. The two leaders met one-on-one and discussed a range of issues including the 2016 U.S Election collusion. (Photo by Chris McGrath/Getty Images)

After U.S. President Donald Trump shocked the world by doubting his own intelligence community’s conclusions about Russian meddling in the election that brought him to power, most of Washington’s most powerful lawmakers—both Republicans and Democrats—expressed dismay at the president’s comments. Sen. John McCain, the chair of the Senate armed services committee who’s ailing with cancer, published a blistering statement about Trump’s “disgraceful performance.” But he wasn’t alone in using strong words. (Vice-President Mike Pence disagreed, arguing Trump will “always put the prosperity and security of America first.”)

“Today’s press conference in Helsinki was one of the most disgraceful performances by an American president in memory. The damage inflicted by President Trump’s naiveté, egotism, false equivalence, and sympathy for autocrats is difficult to calculate. But it is clear that the summit in Helsinki was a tragic mistake.

President Trump proved not only unable, but unwilling to stand up to Putin. He and Putin seemed to be speaking from the same script as the president made a conscious choice to defend a tyrant against the fair questions of a free press, and to grant Putin an uncontested platform to spew propaganda and lies to the world.

READ MORE: Trump and Putin preside over the funeral for Ronald Reagan’s party

It is tempting to describe the press conference as a pathetic rout—as an illustration of the perils of under-preparation and inexperience. But these were not the errant tweets of a novice politician. These were the deliberate choices of a president who seems determined to realize his delusions of a warm relationship with Putin’s regime without any regard for the true nature of his rule, his violent disregard for the sovereignty of his neighbors, his complicity in the slaughter of the Syrian people, his violation of international treaties, and his assault on democratic institutions throughout the world.

Coming close on the heels of President Trump’s bombastic and erratic conduct towards our closest friends and allies in Brussels and Britain, today’s press conference marks a recent low point in the history of the American Presidency. That the president was attended in Helsinki by a team of competent and patriotic advisors makes his blunders and capitulations all the more painful and inexplicable.

No prior president has ever abased himself more abjectly before a tyrant. Not only did President Trump fail to speak the truth about an adversary; but speaking for America to the world, our president failed to defend all that makes us who we are—a republic of free people dedicated to the cause of liberty at home and abroad. American presidents must be the champions of that cause if it is to succeed. Americans are waiting and hoping for President Trump to embrace that sacred responsibility. One can only hope they are not waiting totally in vain.” [Statement]

“The role of the Intelligence Community is to provide the best information and fact-based assessments possible for the President and policymakers. We have been clear in our assessments of Russian meddling in the 2016 election and their ongoing, pervasive efforts to undermine our democracy, and we will continue to provide unvarnished and objective intelligence in support of our national security.” [Statement]

“Donald Trump’s press conference performance in Helsinki rises to & exceeds the threshold of ‘high crimes & misdemeanors.’ It was nothing short of treasonous. Not only were Trump’s comments imbecilic, he is wholly in the pocket of Putin. Republican Patriots: Where are you???” [Tweet]

“As I have said repeatedly, the Russians are not our friends and I entirely agree with the assessment of our intelligence community.” [Tweet]

“In the entire history of our country, Americans have never seen a president of the United States support an American adversary the way @realDonaldTrump has supported President Putin. For the president of the United States to side with President Putin against American law enforcement, American defense officials, and American intelligence agencies is thoughtless, dangerous, and weak. The president is putting himself over our country.

Starting with the president’s trip to NATO and ending with his shameful performance at today’s press conference, @realDonaldTrump has strengthened our adversaries while weakening our defenses and those of our allies. A single, ominous question now hangs over the White House: what could possibly cause @realDonaldTrump to put the interests of Russia over those of the United States? Millions of Americans will continue to wonder if the only possible explanation for this dangerous behavior is the possibility that President Putin holds damaging information over President Trump.” [Tweets]

“Foreign policy must be based on reality,not hyperbole or wishful thinking. And the reality is #Russia is an adversary. Because #Putin doesn’t believe in win/win scenarios & thinks only way to make Russia stronger is to make U.S. weaker. Any approach not based on this will fail. #Putin’s interference in 2016 didn’t elect Trump & it doesn’t mean we don’t deal with him on other issues. But we can’t afford to forget he always exploits weakness. If we don’t acknowledge & punish what he did,his next attack on us will be bolder,more brazen & far more damaging.” [Tweet, Tweet]

“Putin has been very successful at dividing our nation. This is a threat to open democracies… NATO is more than a defense treaty… we are aligned because we are countries that believe in rule of law, a free press, and one person one vote … Those are values and I just wish we heard more from this President reaffirming those values rather than [siding] with President Putin against his own intelligence community.” [Tweets]

“The Senate Intelligence Committee has reviewed the 2017 IC assessment and found no reason to doubt its conclusion that President Putin ordered an influence campaign aimed at the 2016 U.S. elections with the goal of undermining faith in our democratic process. Russia has conducted a coordinated cyberattack on state election systems, and hacked critical infrastructure. They have used social media to sow chaos and discord in our society. They have beaten and harassed U.S. diplomats and violated anti-proliferation treaties. Any statement by Vladimir Putin contrary to these facts is a lie and should be recognized as one by the President.

Vladimir Putin is not our friend and never has been. Nor does he want to be our friend. His regime’s actions prove it. We must make clear that the United States will not tolerate hostile Russian activities against us or our allies.” [Statement]

“I think having open lines of communication is very important for avoiding war.” [Fox News video]

“When he had the opportunity to defend our intelligence agencies who work for him, I was very disappointed and saddened with the equivalency that he gave between them and what Putin was saying.” [Reuters story]

“The U.S. intelligence community knows that the Russian government attacked the U.S. This is not a Republican or a Democrat view—it is simply the reality. All patriotic Americans should understand that Putin is not America’s friend, and he is not the President’s buddy. We should stand united against Putin’s past and planned future attacks against us.” [Tweet]

“Let me be very clear. Vladimir Putin is not our friend. He is an adversary. He has proven that through his actions. He has said his goal is to restore the former Soviet Union. We know that he has meddled in the United States elections. We know he’s invaded Ukraine. We know that he has been cheating on the nuclear weapons actions.

“The president must appreciate that Russia is not our ally … There is no moral equivalence between the United States and Russia, which remains hostile to our most basic values and ideals. The United States must be focused on holding Russia accountable and putting an end to its vile attacks on democracy.” [NPR story]

“As a member of the House Armed Services Committee, I am deeply troubled by President Trump’s defense of Putin against the intelligence agencies of the U.S. & his suggestion of moral equivalence between the U.S. and Russia. Russia poses a grave threat to our national security.” [Tweet]

“If Donald Trump failed to stand up to Putin in front of the press, what makes you think Kevin McCarthy, Mitch McConnell and Republicans in Washington will defend us from a foreign adversary’s attack? They’ve done nothing. It’s on us to vote out the sell-outs.” [Tweet]

“President Trump must clarify his statements in Helsinki on our intelligence system and Putin. It is the most serious mistake of his presidency and must be corrected—immediately.” [Tweet]

“This was the day an American president stood on foreign soil next to a murderous lying thug and refused to back his own country. Patriots need to stand up and reject the behavior of this president.” [Tweet]

“That’s alarming that the president would not stand behind that entire intelligence community and judicial process and back them up 100% … He should have reiterated something he should have said to Putin. Something like this, ‘Mr. President, we have the evidence that you do this’ … ‘If you meddle in the 2018 or 2020 election, as you have done in 2016, not only am I going to slap the toughest sanctions on you that I possibly can, but I will tell you the relationship between you and me is over at that point.’ ” [Fox News story]

“President Trump’s decision to side with Putin over American intelligence agencies is disgraceful and detrimental to our democratic principles. Russia remains our number one geopolitical adversary; claiming a moral equivalence between the United States and Russia not only defies reason and history, it undermines our national integrity and impairs our global credibility.” [Tweet]

“I am disappointed the President missed an opportunity in Helsinki to hold President Putin accountable on the international stage. Going forward, I hope he will continue to advance his Administration’s tough policies—the toughest since Ronald Reagan.” [Tweet]

“What the world saw, what the American people saw, is that President Donald Trump will always put the prosperity and security of America first.” [Tweet]

Russian Ministry of Foreign Affairs, in response to Trump’s tweet about “U.S. foolishness and stupidity” contributing to poor relations with Russia: