Are young Canadians really better off than young Americans?

Why our leaders shouldn't dismiss the Occupy Movement 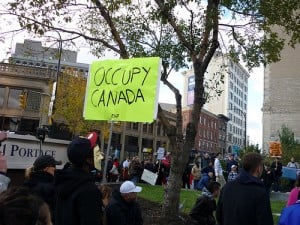 Jamie Weinman has a post on Maclean’s.ca suggesting that student debt is fuelling the Occupy Everywhere protests. Weinman quotes this Washington Post article by Ezra Klein who writes that “college debt represents a special sort of betrayal.” He says he began supporting the protests after seeing a photo on the Tumblr site, “We are the 99 percent.” It was of a handwritten sign by a student that said: “I did everything I was supposed to and I have nothing to show for it.”

Their point is this. While many of the people hurt by the financial crisis should have known better—people who took out mortgages they knew they couldn’t afford and bankers who invested in financial instruments they knew were overrated—students who took on debt are different. They went into debt because they had been told repeatedly by parents, teachers, politicians and the media that educational debt is a sure route to higher paying jobs. Now that we know that’s often untrue, can we really blame them for being angry?

One way that Canadians have dismissed this anger is by saying, “it’s not so bad here.” Wendy Dobson, of the University of Toronto’s Rotman Institute for International Business, told The Varsity: “Canada’s problems are nowhere near what has sent young Americans to those demonstrations.”

Likewise, Jim Flaherty, our Federal Finance Minister, remarked to The Globe and Mail that the American protesters have “some legitimate frustration,” considering their high youth unemployment. But not in Canada. We have strong banking regulations and a progressive income tax system.

But consider this. Typical student debt, for those who have it, is almost identical in the two countries. The Canadian Federation of Students says that average graduate debt in Canada is $25,000. South of the border, average debt is $24,000, according to the Project on Student Debt.

Youth unemployment rates are similar too. Is there much difference between the 14 per cent rate reported by Statistics Canada and the 18 per cent reported by the Bureau of Labor Statistics?

What’s more, a bachelor’s degree may open doors to higher earnings for some people, but according to a new report, 18.5 per cent of Canadian grads earns less than half our country’s median income of $37,002. That’s the highest number of underpaid and over-educated citizens in the OECD. Think about it. One in five university grads in Canada makes less than $18,501.

And what about the graduates in Canada who are working, but in jobs that they could have gotten without a university degree? According to the most recent Labour Force Survey, the industry with the largest employment gains in September was accommodation and food services. Needless to say, some of those jobs can be done without degrees—and without student debt.

So before dismissing the movement, our leaders might want to look more closely at the numbers.

For a different take on the Occupy Movement, click to read this opinion piece by Robyn Urback.