Opinion: The military is scrambling after a court decided that its process for trying soldiers with civil crimes violates the Charter—exposing its double standard 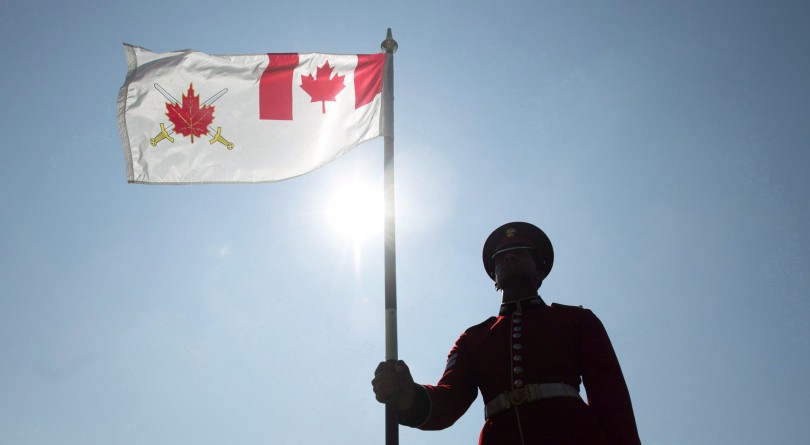 A ceremonial guardsman holds the Canadian Land Forces Command flag during a change of command parade on Parliament Hill, in Ottawa on Thursday, July 18, 2013. (Adrian Wyld/CP)

Described in media coverage as a “bombshell,” a Sept. 19 decision by the Court Martial Appeal Court—which ruled that the military’s current process of trying service members for serious civil crimes violates their charter rights—certainly feels like one. It has caused massive organizational upheaval, and it could radically alter the Canadian Armed Forces. But this decision is long overdue—and it will become a vital component of a change agenda that’s desperately needed for the military.

The higher court’s decision stems from a charge brought against an Edmonton-based soldier, Master Corporal Raphael Beaudry, who was accused of sexual assault causing bodily harm in December 2014. Beaudry asked for the charge to be heard in a civil court before a judge and jury; his request was denied by the military.

Once he was convicted by the military court process, Beaudry appealed the guilty verdict, arguing that Para 30(1)(a) of the National Defence Act (NDA) and the Code of Service Discipline violated Section 11f of his Charter Rights to a civil trial by judge and jury. That part of the charter specifically says that “except in the case of an offence under military law tried before a military tribunal,” the person charged has “the right to a civil trial where the penalty imposed could be five years or more.” The really shocking outcome in this case was that the appeal court upheld the objection raised by Beaudry, despite the wording of the Charter and a significant amount of case history related to earlier judgments that invalidated other similar appeals. The stunning majority ruling by the Court Martial Appeals Court found that “civil offences are not offences under military law”; it had always been assumed by the Judge Advocate General’s office that a civil offence could be tried under the National Defence Act.

The military leadership is now scrambling to appeal the Court Martial Appeal Court’s September decision to Canada’s Supreme Court. They fear this new limitation of traditional powers of punishment will have negative impacts on military discipline and operational effectiveness, as well as on the 40 cases currently awaiting trial by a court martial. But the admirals and generals also seem intent on defending the system and the power it has conferred on leaders, who genuinely view it as an essential tool to preserve the chain of command, especially in a conflict zone.

Military instructors constantly taught that our conduct was held to a higher professional standard because of the unique nature of our service. The military, we were told, executes deadly violence in the form of military actions on behalf of the government of Canada, and this harsh reality demanded strict adherence to the code of conduct and loyalty to the chain of command. However, it also created a double standard between the civil and military justice systems, and a form of elitism that reinforces the authoritarian nature of military command.

Some commanders even used the system to ensure maximum punishment and control. If a soldier was punished, they could ensure a guilty verdict would be achieved through the use of several generic “catch-all” charges in the NDA itself, the most notorious and widely employed being Section 129, entitled “Conduct to the Prejudice of Good Order and Discipline” or, as some advocates call it, the “Devil’s clause.” Under this authority, any infraction to any order, any regulation or any instruction is considered “prejudice of good order and discipline.” The highly subjective nature of the charge meant its deployment was somewhat questionable at best—and horribly abused, at worst.

A Section 129 charge was a way for the leadership to impose their will on subordinates, no matter what the main issues of the infraction may have been. On numerous occasions during my own military career, I heard superiors threaten subordinates this way: “If you do not do what I say, you will be charged.” The power contained under Section 129 was the figurative hammer that bad leaders used to make reluctant followers obedient, and to crush the obstinate.

This ruling by the CMAC is not the only assault on military legal authority. In May, the government announced several sweeping changes to the system, some of which may have set the stage for this ruling by the appeal court. A number of the changes, such as admitting victim impact statements, came into effect on Sept. 1. Retired colonel Michel Drapeau, a frequent commenter on military justice, said that the deficiencies of the old system were “gross violations of the victims’ constitutional rights” that reduced them to “second-class citizens.” How, then, is it possible that the military members are to be held to a higher standard of conduct and ethics when they are subject to a vicarious system that would not be acceptable by their countrymen?

READ MORE: The only thing that will fix Canada’s military is public outcry

Another challenge to the military system has been the series of feature opinion articles that retired major Tim Dunne has been writing for the Halifax Chronicle Herald. With his exhaustive research and penetrating analysis, his articles—which have received national and international attention, including from the Yale University Center for Global Military Justice Reform—show that the origins of the system employed by Canada are deeply outdated. The summary trial, he notes, stems back to the English Mutiny Act of 1689, a time when the lash and the noose were common punishments. He argues that new recruits to the military do not lose their rights upon taking the Oath of Allegiance, but that is precisely what happens after a charge is laid against them; the outcome is virtually assured. “Over the past 15 years, there have been more than 23,400 summary trials. That’s an average of 1,560 annually,” he writes. “Only about five per cent of those accused are acquitted.”

In fact, the Canadian military’s leadership is defending a system that is no longer even being used in the United Kingdom. Dunne’s writings show that instead, the British have adopted a new process—“minor administrative action”—for infractions apart from their military criminal system. The British established a Summary Appeal Court in 2000, after the European Court of Human Rights rejected summary trials on human rights grounds. They ruled that only a competent court can deprive a person of their rights to freedom, and that can only occur after a fair trial by an independent and impartial tribunal. “Outside of a declared war, the only law that should apply to the military is the civil code,” Dunne said in an interview with Maclean’s. “The military code must be updated, or it should be eliminated.”

READ MORE: Serving in Canada’s military was my dream. It turned into a nightmare.

Much more needs to be done to eliminate the double standard of the military justice system and all other such irrational aspects of military service. The truth of this is evident how unattractive a military career is to young Canadians today: All three services continue to fall far short of their recruitment goals. Could there possibly be a greater deterrent to recruitment than these dreadful statistics about brutal, arbitrary-feeling punishment? To make a military career more appealing, recent policy decisions and budget increases, like creating the cyber security initiative—as well as the recent small concession by the navy to allow beards to the millennial cohort of new sailors—represent good progress away from legacy systems and last-war mentality. But far more important than any of these initiatives is a fair and impartial justice system that aligns with Canadian charter rights and public values.

It is hard to imagine that the Supreme Court will overturn the ruling by the Court Martial Appeal Court, and the more likely outcome will require the Canadian military to undergo the same type of institutional change that has occurred in the United Kingdom. This will not be easy, and the justice aspects of this change will likely be both painful and costly; it could well open all prior cases that resulted in convictions to a massive class-action suit, going as far back as the signing of Canadian Charter of Rights on Apr. 17, 1982. But change must, and will, continue to come to the Canadian military. It is far better that the Canadian Armed Forces try to be in front of this change—respecting Charter rights and freedoms, without exception—rather than be dragged, kicking and screaming, behind it.