Opinion: The Conservative Party leader has demoted his former rival—a schism that Scheer could have avoided, amid Trump's wedge over supply management 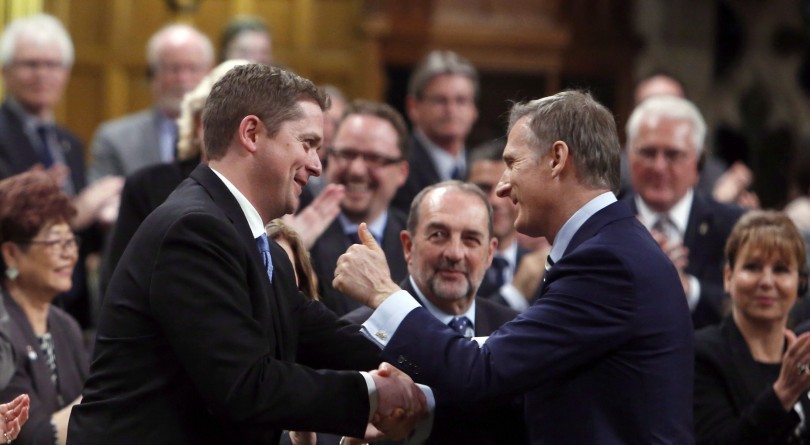 Conservative MP Maxime Bernier(right)gives the thumbs up to Conservative Leader Andrew Scheer in the House of Commons during Question Period on Parliament Hill in Ottawa, Monday, May 29, 2017. THE CANADIAN PRESS/Fred Chartrand

Donald Trump’s quest for power began by setting a cat amongst the Republican pigeons—and now it’s drifted north to try its luck with Andrew Scheer’s kit.

Scheer’s sacking of leadership runner-up Maxime Bernier from his role as critic for innovation, effectively for siding with Trump in the latter’s quarrel with Canada now produces a sharp test of Scheer’s leadership. Can he keep the MPs who backed Bernier on board, all while demonstrating solidarity with Justin Trudeau in his fight with Trump over a policy—supply management—that conservatives ought to hate with every fibre of their being? Ladies and gentlemen, meet a géant sandwich de merde.

But wait a minute. Hasn’t Bernier always opposed supply management? Isn’t that the first thing people say about “Mad Max”? Isn’t his long-running jihad against Canada’s dairy cartel something the Liberals needle the Tories about daily in Question Period? If so, why sack him now?

Indeed. But this presumes the issue was supply management, when it isn’t really that.

After all, Bernier didn’t beat his chest in open support of Trump. He didn’t even duplicate his leadership race feat of writing in agreement with the President’s opposition to dairy tariffs in a national newspaper. Nor did Bernier criticize Scheer personally over the latter’s incessant heavy-petting of the dairy cartel. Bernier merely posted a section of his recently shelved book to his website, in which he re-affirms his long-term opposition to supply management. Yeah, and we think U.S. politics is stupid.

In case you missed the previous episode of As the Conservative World Turns, earlier this year Bernier wrote a book outlining his “vision” for Canada that included a tart passage ascribing Scheer’s leadership win to supply-management-supporting rent-a-members. Needless to say, Scheer and the caucus weren’t thrilled about the challenge to the new boss, and Bernier quickly backed down, even going so far as to kill the book’s publication.

An anonymous Tory source backs up the “nope, this definitely wasn’t over supply management” interpretation of the Bernier booting, claiming Scheer acted because Bernier “made a commitment to the leader and to caucus that he would no longer promote his book, and he misled the leader and the caucus.”

This explanation, however, invites us to dance on the head of a pin. Had Bernier not regurgitated his existing writing and instead penned a separate anti-cartel screed, would Scheer have come down like a tonne of milk bottles? One presumes the answer is yes, but I guess we’ll never know.

Which brings us to the real issue. Despite finishing within a hair’s breadth of each other in last year’s Conservative leadership race, Scheer and Bernier clearly haven’t found a way to communicate. And while Scheer hasn’t completely humiliated Bernier by naming him critic for amateur sport, criticizing the government’s innovation plans clearly isn’t floating Bernier’s boat. Our man Max wants more of the spotlight.

This failure to communicate doesn’t hurt when all are in agreement on Liberal overspending, or on the alarming number of illegal border crossings. But it’s proving plenty painful when the subject is Bernier’s hobby horse, and the main actor in the drama is the odious Donald Trump.

The cruellest irony? Trump’s rants against Canadian dairy tariffs were meant to undermine the “weak” Justin Trudeau’s Liberal government, not challenge the Conservative opposition Trump never mentions, or the leader Trump couldn’t name if given the Parliamentary directory and the clue “rhymes with beer.” And yet, here we are.

That said, the Bernier schism is Scheer’s failing. The second that Trump began fixating on dairy tariffs, the Tory leader needed to pull Bernier close to walk him through his planned response. There might even have been a role for Bernier to play as an outrider in the case Trudeau decided to put supply management on the table. But by all appearances, Scheer didn’t hug his man, and the result is that he now has to play caucus Twister with one foot permanently planted on the silly circle called supply management.

With Bernier, Scheer was damned if he does, and damned if he didn’t. Unity is both ephemeral and essential to politics. Keeping a hundred-plus individuals in lockstep across hundreds of policy issues might be a mug’s game, but it’s also become a leader’s litmus test. If you can’t manage your movement, what hope is there for the management of a country?

Perhaps Bernier wouldn’t have listened, or already didn’t; the man has a history of blurring the line between principle and personal. By taking an issue of solidarity (opposition to Trump’s aggression) and making it one of principle (opposition to supply management), he has prompted Scheer to act out of principle in the name of (caucus) solidarity, all to the delight of the press and the Liberals. What a funny world.