Opinion: 'One side supports clean water; the other side supports poison. The centrist’s solution is to meet in the middle. Everybody gets poisoned water.' 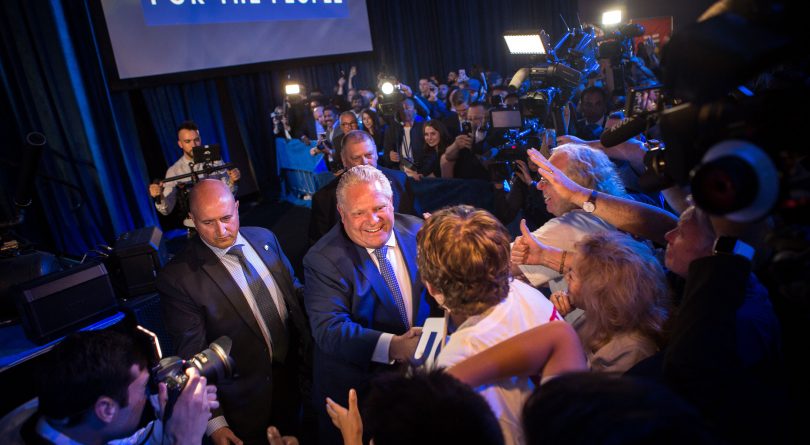 Ontario Premier Designate Doug Ford shakes hands with his supporters after his speech at the PC headquaters in Etobicoke, Ontario (Photograph by Chris Donovan)

Five years ago, at the Ontario Liberal leadership convention in downtown Toronto, the party stood at a crossroads. Though there were were six challengers to lead the party through the post-Dalton McGuinty years, only three seemed to have a serious shot at winning. There was Gerard Kennedy, longtime party stalwart and one-time contender for the federal Liberal leadership, who came into the race with all the charisma of lukewarm vegetable soup. There was Sandra Pupatello, the Windsor-born and -bred firebrand, who promised to bring the Progressive Conservatives “to their knees.”

And then there was Kathleen Wynne, Pupatello’s temperamental opposite, who carried herself with the air of a beloved principal. Wynne was both the centrist alternative and a balm for the haughty arrogance of the McGuinty era, which left voters with the impression that the Liberals were as irritated with their incessant questions about the e-health scandal as the voters were with the administration’s refusal to answer them directly. At the time, the party chose a measured centrist candidate to hold the party together, and indeed, Wynne wasn’t just able to fend off an election challenge from the centre-right opposition led by Tim Hudak—she led the Liberals to a majority government.

But now, with the Liberals decimated to the point that they no longer have party status and with the Progressive Conservatives winning a majority mandate under populist leader Doug Ford. the time for centrist politics—as elsewhere in the world—is coming to an end.

One of the major obstacles being faced by centrists and progressives in western countries, at the moment, is exactly how to combat the rise of the right wing’s Know-Nothing faction. Often bereft of tangible platforms, an interest in evidence-based policy, or even a passing relationship with the truth, this faction has managed to sail to victory in the United States and the United Kingdom, and currently threatens to turn Germany and Sweden over to the control of nativists. In Ontario, Ford’s disruptive victory over perennial sensible choice Christine Elliott represented yet another coup for the Know-Nothing right; the Progressive Conservatives not only sailed to a majority government under his leadership, they managed to do so without releasing a fully costed platform.

The centrist proposition to that obstacle has, so far, been a reliance on facts and decorum. That was exemplified by Michelle Obama’s campaign plea during Hillary Clinton’s presidential run: “When they go low, we go high.” Wynne attempted to throw that rule out the window and retaliate in tit-for-tat exchanges with Ford and the Progressive Conservatives (which was at noticeable odds with her even-keeled brand), but soon returned to the mushy middle by turning her criticism toward the New Democrats once that party began to surge in the polls. While the New Democrats returned to opposition status for the first time in 21 years, several ridings were surrendered to Progressive Conservatives (especially in the 905 region) after the Liberal strategy veered toward equating the prospect of NDP and PC majorities as equally intolerable.

READ MORE: Jean Charest’s advice on how to revive a decimated party

Part of the reason that progressive candidates lose elections is the perception, often driven by the conventional wisdom of centrism, that the voting populace is simply not ready to embrace radical leftist ideas—ideas like higher taxes on the rich, enabling students to graduate university without a mountain of debt, and universal health, dental, and pharmaceutical coverage. But the groundswell of the progressive left, driven primarily by young people disaffected with capitalism’s false exceptionalist dreams that leave them broke and indebted, enabled Bernie Sanders to run an insurgent Democratic primary campaign (which later doomed the candidacy of the centre-left Clinton), and helped Jeremy Corbyn to revive the UK’s Labour Party from near-irrelevance. And in Ontario, a number of NDP candidates labeled by the PCs and the media as “radicals” managed to win their ridings handily.

A very good friend of mine who is a Liberal party operative and Ph.D student at University of Toronto once explained to me that typical centrist thought looks something like this: one side supports clean water; the other side supports poison. The centrist’s solution, of course, is to meet in the middle. Everybody gets poisoned water.

It is, of course, an absurd analogy. But in the wake of this election, it’s apparent that 15 years of accumulated scandals could not be smoothed over by the Liberals, no matter how balanced their approach. And with the NDP having essentially consumed the centre-left vote in this election, the next four years look to be an exercise in what happens when politics are polarized less by policy than by deeply held views on the social contract. For the Liberals to return to relevance, they’ll need to offer voters more than a balanced approach. They’ll need to speak to the feeling that many voters have: that our society is becoming deeply and possibly irreparably fragmented.

The tidal forces of progressive desire for a more socially equitable society, and the populist right’s desire for a nativist society that protects its own, have exerted a shearing force that, across western societies, are annihilating parties that attempt to placate both interests. Four years of a majority government facing an opposition on the other end of the spectrum is likely to further deepen this divide in Ontario. Kathleen Wynne could no more prevent a PC victory by attacking the NDP’s reluctance to legislate an end to strikes, than she could have by attacking Doug Ford’s dismal record at Toronto City Hall. There’s simply no room for that brand of politics left in Ontario—or, perhaps, the world.

It was a pleasant run while it lasted. But now it’s time for voters to truly decide what type of society we’d like to live in. At some point, everyone needs to choose a side.