Opinion: Whether the government's actions around the province's electricity system will offer consumers any significant benefits remains an open question at best 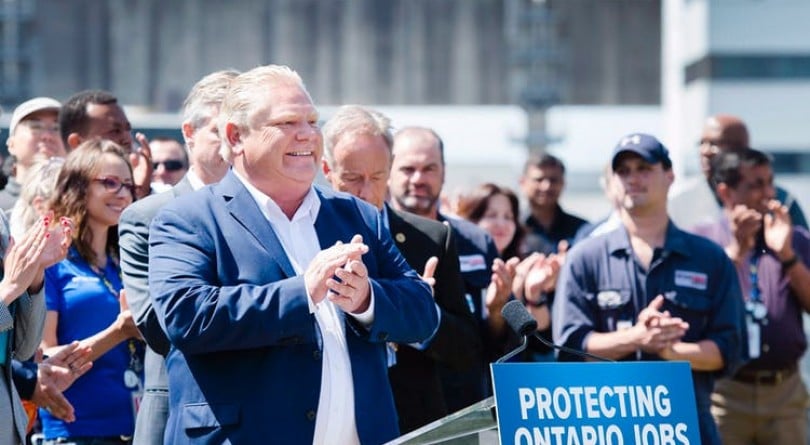 Ontario Premier Doug Ford announces his plan to keep the Pickering Nuclear Generating Station in operation until 2024, in this June 2018 photo. (THE CANADIAN PRESS/Nathan Denette)

Mark Winfield is a professor of environmental studies at York University.

Over the past two weeks, Ontario’s new Ford government made a series of high-profile actions regarding the province’s electricity system.

These included the ouster of Hydro One CEO Mayo Schmidt and the subsequent resignation of the remainder of the utility’s board. The Ontario government has also announced it’s cancelling 758 renewable energy projects, specifically targeting the 18.5-megawatt White Pines wind power project in Prince Edward County for termination.

These moves come on top of the government’s repeated statements that it intends to terminate Ontario’s cap-and-trade system, end subsidies for electric vehicles and cancel support for home energy efficiency retrofits.

The government’s intent is to “lower electricity bills.” Whether these actions will offer consumers any significant benefits remains an open question at best.

The specific merits of former Hydro One CEO’s $6 million annual salary notwithstanding, executive compensation constitutes a tiny portion of the overall costs of Ontario’s electricity system, amounting to pennies per month on the average residential hydro bill.

The company heading up the White Pines project has already signalled its intention to seek $100 million in damages.

The government appears to believe that it can protect itself from such lawsuits through legislation. That remains to be seen.

But it won’t shield Ontario from investors in countries that have signed trade agreements with Canada that include provisions that allow them to seek compensation for measures taken by host governments that reduce the value of their investments, like NAFTA’s notorious Chapter 11.

Canada has entered into dozens of such agreements over the past two decades.

Yet the new government remains steadfast in its obstinate refusal to examine the key drivers of future increases in electricity costs in Ontario. Namely, the planned refurbishments of the Darlington and Bruce nuclear power plants, and the proposed — and potentially perilous — “life extension” of the aged Pickering facility. The Liberals foresaw hydro rate increases in excess of 50 per cent over the next 20 years, in large part due to these projects.

The government’s approach carries with it other major risks.

In addition to deepening the already extraordinary extent to which decision-making around electricity matters in Ontario have become politicized, the government’s moves send very clear signals that Ontario may not be a stable location for major energy investments.

More specifically, the government’s energy strategy, such as it is, seems to target technological developments that are widely seen as constituting the leading edge of the energy sector.

These include renewable energy technologies, whose technical and economic performance has improved dramatically over the past decade towards near parity with conventional energy sources; energy storage, central to the growing adoption of electric and hybrid-electric vehicles, advanced electronics and the modernization of electricity systems; and smart grids, which allow the integration of distributed, and potentially more reliable, cost-effective and resilient energy sources.

In effect, Ontario seems to be announcing that it has no interest in being part of these technical and operational developments.

If the Ford government is serious about reducing electricity costs in the long-term, the most sensible course would be to pause and take stock of the full range of options available to the province to meet its future electricity needs.

It must not only consider nuclear refurbishments, but also importing electricity from Quebec, implementing conservation initiatives and adding more renewable energy to the grid.

Whether the Ford government can move beyond its current fixation on dismantling the previous government’s climate change strategy — and its apparently profound loathing of anything to do with renewable energy — to articulate a viable energy and hydro strategy that will protect Ontario consumers from future cost increases remains to be seen.