Incels are fuelled by stupid, pointless rage—but that rage is still a major threat

It might be uncomfortable to talk about misogyny after a deadly van attack on Toronto's Yonge Street. But we ignore it at our own peril, writes Tabatha Southey 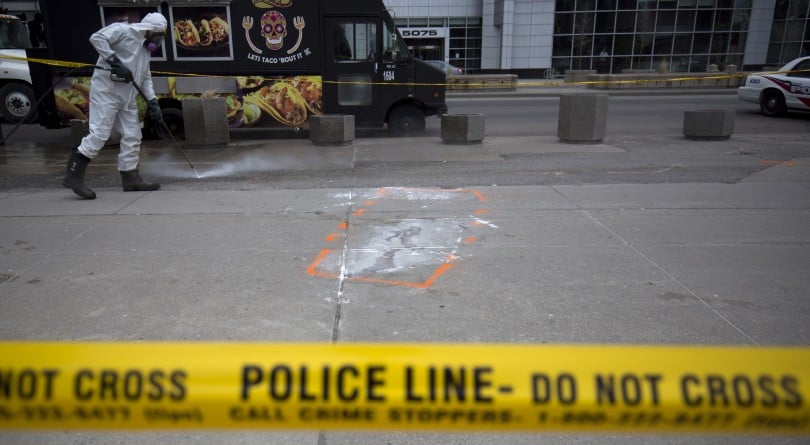 TORONTO, ON - APRIL 24: A hazmat worker scrubs the sidewalk of blood and debris near an outline of where a body laid after a mass killing on Yonge St. at Finch Ave. on April 24, 2018 in Toronto, Canada. A suspect identified as Alek Minassian, 25, is in custody after a driver in a white rental van drove into multiple pedestrians, killing 10 and injuring at least 16. (Photo by Cole Burston/Getty Images)

It was like Commissioner Gordon pushed the wrong button: The Bad Take Signal lit up the sky, and the whole Just Hear Me Out League responded. Very shortly after the Toronto van attack that killed 10 people and left 15 injured, the bad takes started coming out.

Of course, those who were and continue to be circumspect about assigning a single motive to the attack are right to do so. While Facebook has confirmed that the status quickly attributed to the alleged killer—“The Incel Rebellion has already begun! We will overthrow all the Chads and Stacys! All hail the Supreme Gentleman Elliot Rodger”—is authentic and elements suggest he wrote it, there are still questions to be answered. Those questions should not, however, include “What does it matter why he did it?” and “Do these guys have a point about how women are doing sex all wrong?”

Even if, and it’s doubtful, that post turns out to be the result of a hack, or we learn the alleged attacker’s roots in the “incel” community—a group that places the blame for the fact that they are “involuntarily celibate” squarely on women—weren’t deep, the manner in which the facts of the attack were received by the incels would be newsworthy in and of itself. A number of self-identified incels were excited and delighted when the story broke. And if members of any group took it upon themselves to celebrate innocent people being killed—should, say, the good people over at the excellent subreddit TreesSuckingOnThings take to hailing a murderer as “The Supreme Observer of Tree Sucking” and posting murderer fan art among the trees—I think we’d look into that situation. We would do that even if there was no evidence that killer in question was inspired by tree suckage.

But there seemed to be something close to panic in some circles lest people start suggesting anything that might affirm what a number of women having been saying for years, which is that a certain percentage of men want to kill them.

The vibe in the aftermath of the van attack and the following reports was very much “A lot of people died and, if we’re not careful, this is going to make feminists insufferable.” It was as if flares went up: all hands on deck! Divert! Divert! And I’m not suggesting that any of the people who wrote any of the many Nothing to See Here takes or nodded at them approvingly are at all sanguine about murder. However, it’s difficult to escape the conclusion that a fair number of people are worried about where an honest investigation might lead. After all, if we’re ultimately forced to acknowledge that a tiny minority of people are driven to kill by misogyny, we might be forced to consider the idea that a great many more people might have, say, unconsciously given a harsher performance review under that same influence. And so out those bad takes came.

Margaret Wente, writing in the Globe and Mail, said that people ought not to “cite our current favourite whipping boy, misogyny,” and should instead note that since we can’t ban vans, the only sensible response is to shrug our shoulders at this “random act of violence by a homicidal loser.” “That’s life,” she wrote.

Breaking news: People who have spent years pooh-poohing the idea that matches are dangerous children’s toys would not like the cause of that house fire investigated.

Over at The Walrus, Stephen Marche could not sweep the concept of misogyny under the rug fast enough. “The violence that fills our cities is not operating out of a conscious military strategy emerging out of comprehensible political policy,” explains Marche. He might want to gird his loins and look at some of the forums online; the subreddit /r/incels had about 40,000 members when, in November 2017, it was banned by Reddit because those members kept advocating violent crimes against women, and other sites (I can’t bring myself to link to sluthate.com) hosted meticulously articulated posts that lay out a strategy of systematically raping women in order to seize the power that women, it is earnestly explained, have usurped. It almost sounds political.

The piece, which contains a stirring defence of multiculturalism and a paragraph of speculative fiction about “a nationalist anti-immigrant whack job who wanted to bring Armageddon to one of the most diverse neighbourhoods in the city,” and wonders “what if it had been a Muslim?” still does not find space for the words “women” or “misogyny.” It briefly concedes that “one of the suspect’s Facebook posts mentioned his admiration for Elliot Rodger.”

To my mind, anything that starts with “All hail” and goes on to “Supreme Gentleman” isn’t best described as a “mention”—it’s a paean. But Marche’s most urgent concern appears to be that “soon we will be awash in speculation about whether the Yonge Street killer associates himself with this particular brand of stupid and pointless rage.” This seems a very small thing to have to endure, under the circumstances.

Now seems a good time to remember that stupid and pointless rage, when left to fester and organize, has all too often proven to be a grave threat. Yet to Marche and others, the real risk, in the aftermath of this, is that we might not quickly dismiss the murderer as a lone wolf who just happened to give a shout out to another lone wolf, and whose actions have a lot of other wolves howling. The killer must be framed as someone we can safely, indeed smugly, ignore,  lest we  give the event “meaning,” allowing the lone wolves to collectively win.

But fear not. “I believe that Toronto will escape this trap,” he writes of the apparent intellectual leg-hold of exploring the factors that may have motivated a crime that took the lives of 10 people—people who, one might think, are at least owed a “What was that all about?”

“Yesterday’s hero was a man who restrained himself from action,” Marche writes of constable Ken Lam, the cop who didn’t shoot. “We should imitate his restraint.” What Lam did was incredible and brave, but it was hardly the inaction Marche all but frames it as. Lam took extraordinary action — the correct action — bravely doing what he had been trained to do. I’m not sure the takeaway from an officer heroically facing down a man claiming to have a gun, with ten people already dead, without adding to the body count, which would have prevented the alleged killer from being brought to justice, should be “Nobody, under any circumstances, confront anything unpleasant.”

READ MORE: The rush to blame immigrants and Muslims after a mass killing

Marche is hardly alone in his “move along” take. Jon Kay writing in the National Post seemed mostly concerned that feminists might use the attack as an excuse to engage in “tribalism,” maybe even on Twitter. He declared that the answer to “So how should we react to mass murder?” is “In many cases, by doing nothing,” except hope that future mass murderers are thwarted by self-driving cars and automatic braking systems.

Possibly to Canada’s credit, the strangest response to the Yonge Street attack came from the New York Times’s Ross Douthat, who appeared to feel that incels have a valid point about women not having sex with the right people, even if their proposed solutions were insufficiently medieval for his tastes. Douthat opened his column, headlined “The Redistribution of Sex“ (a response to/defence of a university professor’s equally bizarre blog post on that subject), by saying, “Sometimes the extremists and radicals and weirdos see the world more clearly than the respectable and moderate and sane,” and then argued that the best response to murderously violent misogyny is for society to embrace Catholic sexual mores. Sadly, Douthat concludes, since we all stubbornly refuse to recognize that a nearly 2000-year-old organization run entirely by men holds the cure for misogyny, our best bet is sex robots.

It seems easier for some people to imagine sexy Tesla-driving androids than a world in which men don’t believe that women are the loot bags at the man party and everyone gets one. Leave it to a couple of guys to see eight women and two men dead and take the opportunity to reimagine the Sharper Image catalogue.

That entitlement to women’s bodies—not loneliness or even simple desperation for sex— is what’s at the core of the incel “movement.” Cursory research, something these seemingly wilfully incurious pundits don’t seem to have done, shows that incels are angry less because they aren’t having as much sex as they’d like, and more because they’re not having sex with the exact sort of women they feel they deserve and on the terms they dictate.

The issue, incels argue, is that women are now allowed to choose who they will have sex with. They’ve come up with solutions to this “problem,” some of which are simply absurd: asking the government to assign people a “sexual market value” then forbidding women from sleeping with men more “valuable” than themselves; outlawing hairstyling and makeup to prevent women from Three-Dressed-Up-As-A-Nine’ing their way to more desirable partners, instead of settling for an incel; having the state enforce that women with more than nine sexual partners and single moms “date and have sex with incels that can’t get any women despite the above changes.”

On the still more monstrous end of the spectrum, incels call for rapes and acid attacks on a scale that will make women afraid to leave the house. Then, you see, they’ll settle down with just about anyone for protection. Incels are far from a coherent group, but they are united by the belief that women are sleeping with the men of the “wrong” level of attractiveness, social or financial standing, or—in many cases—race.

Yes, this is a crowd of angry men on the internet, most of whom are almost certainly just fantasizing about violence to make themselves feel tough. But it’s also not nothing. And it only takes one person with a rental van or a gun to translate murderous fantasies into actual murder.

We didn’t want to talk about it after Isla Vista. Let’s not change the subject now.