It's time to put horse-drawn carriages out to pasture 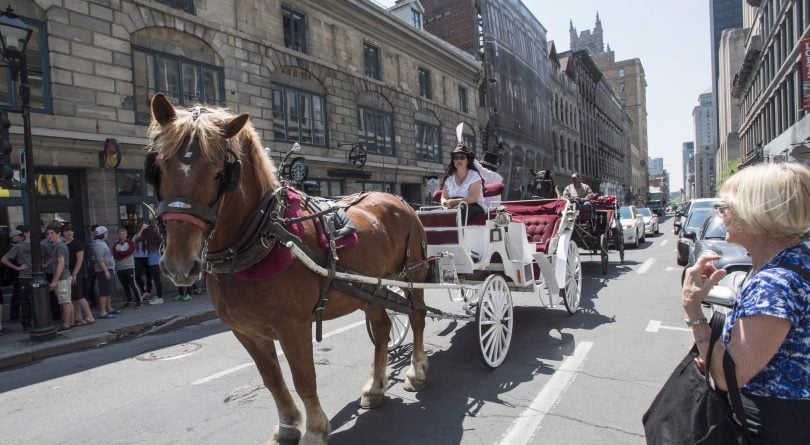 A caleche crosses Old Montreal on its way to a demonstration in front of City Hall, Tuesday, May 24, 2016 in Montreal. (Paul Chiasson/CP)

Horse-drawn vehicles helped build Canada. In the 1800s, during Canada’s golden age of carriages and sleighs, they helped move goods and people further and easier than ever before. They revolutionized trade and personal transportation, requiring less skill than traveling by horseback. Horse-drawn vehicles were central to everything we did and everywhere we went, and they hold an important place in our pre-automobile history.

Today, wandering the Old Port of Montreal, tourists are transported back to this olden era. Cobbled streets, stone-clad storefronts and preserved colonial mansions maintain the genuine aesthetic of early Canada. However, amid the otherwise lovely ambiance is the now less-than-charming visual of horse-drawn carriages—or calèches, as they are known locally—operated by drivers looking to bank on the allure of all that Old World history.

But in our history is exactly where they should stay.

Adorned with fake flowers, some looking gaudy with quilted hot-pink seats and drivers in funny hats, Montreal’s calèches have become a mockery of what they once were. Once majestic and essential to everyday life, today’s calèches—made obsolete by the long-ago advent of machines, cars, and public transit—are merely tired old horses forced to pull blithe tourists through very modern traffic, reducing them to mere novelties. They’re exploitative at best and cruel at worst—and they’re simply unnecessary, either way.

Montreal mayor Valerie Plante has recognized the need to put an end to the industry, vowing to ban calèches as of 2020. This will place the city on a growing list that includes Toronto, Paris, Vegas and London—and it’s time the rest of Canada follows suit.

Horse-drawn carriages can still be found in various locations across the country, including Quebec City, Victoria, Niagara, Ottawa and Charlottetown. And efforts to end the practice in other cities hasn’t been easy. In 2013, Bill De Blasio’s platform for his campaign for the mayoralty of New York City included the promise to rid the city of horse-drawn carriages on day one of his administration. But once elected—with the help from animal rights group NYCLASS—his efforts however were impeded by a lack of votes in city council, and he has stayed relatively silent on the issue ever since.

And just like those in New York City, carriage horses in Canada also continue to be forced to share workspace with loud vehicles, pull heavy carriages across hard pavement, breathe in exhaust fumes, and push through all of our country’s notably extreme weather. In some areas, there are bylaws in place that regulate how many hours per day the carriage horses can work, while also determining the temperatures within which they can be out hauling carriages. But animal advocates have long complained that these rules still allow for inhumane treatment, and that they lack adequate enforcement, which is unfortunately the norm with animal welfare regulations across Canada.

There is also the issue of public safety. Carriage horses have been known to become spooked, causing them to run off with people in their carriages. Horses have also fallen in traffic, and been involved in accidents with other vehicles.

And all for what? At the expense of animal welfare, and with no real respect or reflection of their legitimate place in our history, modern horse-drawn carriage operations across Canada exist merely as a means of entertainment, and to yield profit for humans off the forced labour of animals.

Horse-carriage supporters—mainly the drivers themselves—like to lean on the historical and cultural significance of carriages in Canada to justify their outdated profession. However, if one wishes to learn and appreciate the heritage of horse-drawn vehicles, perhaps it would make more sense to visit to the Canadian Museum of History, where an exhibit called “Horse Power: The Paul Bienvenu Carriage Collection” features 18 beautifully crafted, original carriages and actually contextualizes their use.

Drivers also like to romanticize the experience of riding in a carriage as a way to connect with the animals. But if it’s interaction with horses that you seek, perhaps visiting and supporting a local sanctuary for retired workhorses would provide a more realistic—not to mention more ethical—experience.

Horse-drawn vehicles held a significant place in our country’s history, but today’s horse-drawn carriage industry could not be any further from those roots. And as we are seeing with declining businesses like Marineland and the Vancouver Aquarium, and increasing municipal bans on animals in circuses, it is obvious that Canadians are growing more and more uncomfortable with the use of animals as entertainment.

And so too is it time to put the horse-drawn carriage industry, and the animals, out to pasture for good.