The election battle lines being drawn

Tom Parkin: Andrew Scheer is pinned down with a Max Bernier problem. And Jagmeet Singh is finally freed to take on the struggling Liberals. 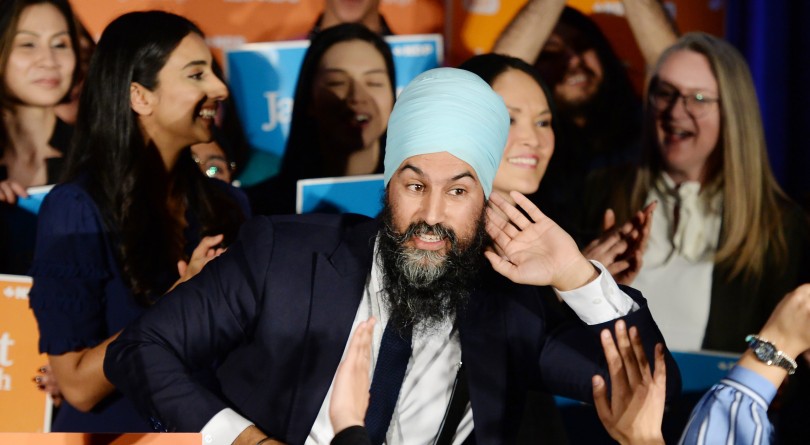 Two new confrontations were laid bare by Monday’s byelections. And how, in the months upcoming, political parties play out these pre-election challenges will frame the final showdown, which ends when Canadians head to the polls in October.

In Burnaby South, NDP leader Jagmeet Singh improved the NDP vote considerably and won his seat comfortably—revealing that the endless winability doubts were more partisan concern trolling than political science. In York-Simcoe, his NDP result was status quo. In Outremount, his NDP exceeded expectations scoring 26 per cent support, but lost the seat. Quebec challenges lie ahead.

Trudeau’s Liberals should certainly take comfort in re-taking Outremont—but dropping eight points in Burnaby South and nine points in York-Simcoe should concern them. The average result across the three byelections would yield a minority—Liberals 32 per cent, Conservatives 29 per cent, NDP 27 per cent. And those results echo the Liberals’ poll support, which droops as Canadians muddle through the detail and arrive at the central fact that Trudeau and his staff repeatedly intervened with the attorney general in an effort to stop the corruption prosecution of a major Liberal donor.

READ MORE: The real bad news in Burnaby South might be for Andrew Scheer

The real loser on Monday night was Andrew Scheer. He has Bernier problems. Conservative support in Burnaby South dropped deeper into third place, bleeding to Bernier’s hard-right People’s Party. In Outremont, the Conservatives ran fifth. While they held York-Simcoe, a four-point boost is not the tide required to sweep Scheer to government. And unlike in Burnaby South, in York-Simcoe the Conservatives faced no threat from the People’s Party candidate, who simply failed to launch, earning just two per cent support.

Laid bare by the Burnaby South results, Scheer’s strategic problem is that the People’s Party has him pinned. He needs to fight the far-right People’s Party by appealing to its far-right supporters. That’s tough to do without alienating mainstream conservatives.

Scheer’s role at the recent “convoy” rally in Ottawa is a snap-shot of the problem. Though watching Scheer compete with Maxime Bernier and Faith Goldy—a politician on the white nationalist fringe—for the support of a rally infiltrated with yellow-vests must be stomach-turning for mainstream conservatives, there he was. And Scheer couldn’t not be there, fearing Bernier would claim unrivaled leadership of the rally.

Thanks to Bernier, Scheer is unable to turn against the far-right, unable to turn to them, with no clear way forward. This is one of the two critical pre-election fights.

The stage for the other key fight was set on Monday as Singh’s win finally unpinned the NDP from its Burnaby South focus. Trudeau’s months of byelection delay kept Singh on the west coast, unable to continue his introduction in Quebec, a crucial battleground where he is not well known. But with his byelection test now won, Singh can make his critical pivot to Quebec to confront the Liberals.

Singh walks into the Quebec confrontation armed with a 15-member Quebec caucus and a durable, if eroded, political base—certainly he leads a Quebec political force many-fold better than what former NDP Leader Jack Layton had in the 2011 election run-up.

And the terrain of this coming confrontation has many features—most obviously, the Prime Minister’s repeated, lobbyist-fueled interventions with the attorney general in an apparent attempt to stop the corruption prosecution of SNC-Lavalin.

The Trudeau Liberals are betting on the position that Quebecers, and Montrealers in particular, will excuse the PM’s effort to block a criminal prosecution because Trudeau says he was doing it to benefit Quebec. Singh and the NDP will try to pierce Trudeau’s veil of Quebec identity politics. Certainly, Liberals doing political favours for political friends remains an open sore in Montreal. So this skirmish will be fascinating to watch.

Another legal action, the trial of former vice-admiral Mark Norman, could add insight into the Liberal friends and favours political approach. Norman is charged with breach of trust by leaking confidential information while the Trudeau cabinet was considering switching a $670 million ship-building contract from Quebec City’s Davie Shipyard to the Halifax shipyard of the billionaire Irving family. Norman’s defense team will explore the relationship between former minister Scott Brison and the Irving family. Brison quit cabinet shortly after court documents listed him as a trial witness.

And in Quebec there are hilltops to be gained by attacking Trudeau’s failure to meet carbon targets and buying a bitumen pipeline. There is concern about failing to protect culture from massive corporations like Netflix. There is anger at tax haven inaction. Trudeau may be the government, he may be ahead – it doesn’t mean Quebecers wouldn’t choose a better option, if it came along.

A critical strategic objective of the NDP has always been to create a bond between progressive voters in Quebec and across Canada. Antipathy to Liberals whose idea of federalism is doing favours for insider friends in both official languages—at the expense of the people of Canada, including Quebecers—may be just the bond the NDP needs. With Singh now unpinned, and Scheer trapped in a side-battle with Bernier, the NDP has a few pre-election months to strengthen that bond.