As Yonge Street goes, so goes Toronto. So when tragedy struck at Yonge and Finch, it hit home—especially since, for many, it happened just down the street 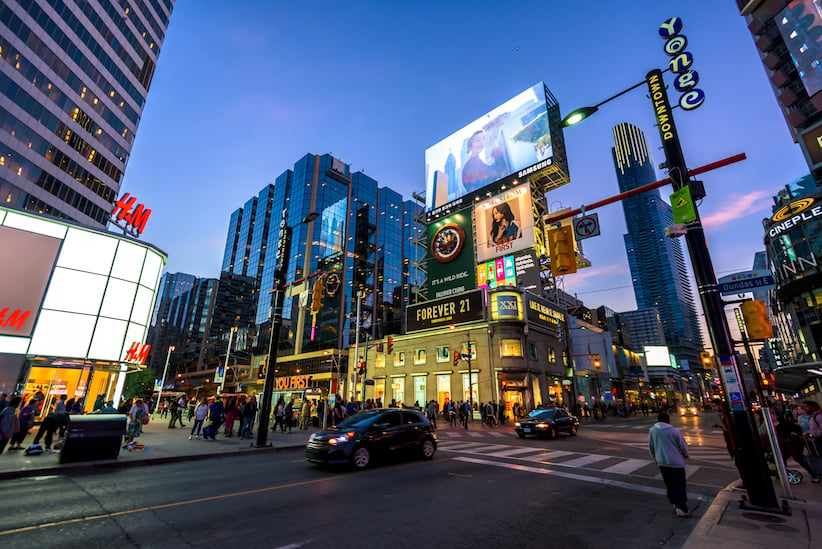 The intersection of Yonge and Dundas. (Shutterstock)

An Indigenous pathway that became popular among fur traders, the trail allowed for strenuous portaging from the mouth of the Humber River to the Holland, which connected Lake Ontario with Lake Simcoe. It was a channel for coureurs du bois like Étienne Brûlé, and for Jesuit missionaries to bring Christianity to the so-called New World. But 178 years after its first recorded use by Samuel de Champlain’s Huron allies, it was supplanted by the construction of John Graves Simcoe’s new military road, Yonge Street, named after Simcoe’s family friend, British war secretary Sir George Yonge. A long road between Lake Ontario and Lake Huron would allow, Simcoe hoped, for the sustained success and defence of a new temporary capital of Upper Canada—an upstart colony called York, named after the second son of King George III.

This rebranding of Indigenous places using institutions named in toadyish tribute to British figures would mark the first of many times that the street would become a reflection of the city itself. Over the road’s two centuries of existence, that became a reliable koan: As Yonge Street goes, so goes Toronto.

MORE: The Toronto van attack, and the cop who didn’t shoot

And so when tragedy strikes the street—as it did on a sunny Monday afternoon, when a van careered into the sidewalk where Yonge meets Finch, leaving 10 dead, 15 wounded, and a city reeling—the shockwaves are felt all along it. For people around the world who have visited Toronto, or have friends and family who live here, the attack on the street—which seems to occupy as wide a psychic space as it does a physical one—hits close to home. But for the hundreds of thousands who live their lives between a farm in Queensville, Ont. and a 25-storey office building that houses the Toronto Star, the tragedy happened just down the road.

“Even though we’re so far away, it’s still one connected street,” says Steve Lane, the owner of Jackflashsigns, one of the northernmost businesses at the northernmost nub of Yonge, in Holland Landing, Ont., where Simcoe’s original Yonge Street ended. Lane has lived his life all along Yonge for decades—in Thornhill near Steeles, and just north of Finch, right by where the incident happened. And even though he now lives almost 40 km away, it feels as if it happened just a few doors down. “It’s still part of my neighbourhood, and part of my life. It is shocking to know this happened on your street, really, even though we’re way up north now.”

MORE: What we know about Alek Minassian, the alleged Toronto van attacker

It’s played host to parades for World Series victors and Stanley Cup champions; it’s where, as F.R. Berchem wrote in The Yonge Street Story, 1793-1860, bands of children went to wave flags and throw talcum powder in the air when the news broke that the First World War was over. Yonge fattens and contracts along its journey: It’s a county road, a six-lane highway, a main street and, for one city block, the Route of Heroes for slain Canadian soldiers. And even though it’s not, as legend would hold, the world’s longest road—a title that now belongs to the Pan-American Highway and which, even when it was held by Toronto in the Guinness Book of World Records, was dubious, since it was only true if the Yonge name was appended to Highway 11—it remains a long path, at least 50 km, with a mythical aura. Indeed, experts still don’t even agree where it ends—in Barrie, or in Queensville, or in Rainy River. And it cleaves through so much of the province that drivers get a look at most of Ontario’s essential landscapes: dirt-road farmland, maple-and-birch woods, sleepy bedroom communities, brutalist beige plazas with sprawling lots, jam-packed highways, suburban commuter neighbourhoods, karaoke bars and restaurants opened by immigrant families, gleaming corporate towers, urine-splashed head-shop crannies for the downtrodden, flashy retail meccas, glass-and-steel condo confections.

That’s long been the relationship between Toronto and its main arterial route. Whatever Toronto has wanted to be, Yonge Street has served as more than merely its vein: it’s also its mirror. 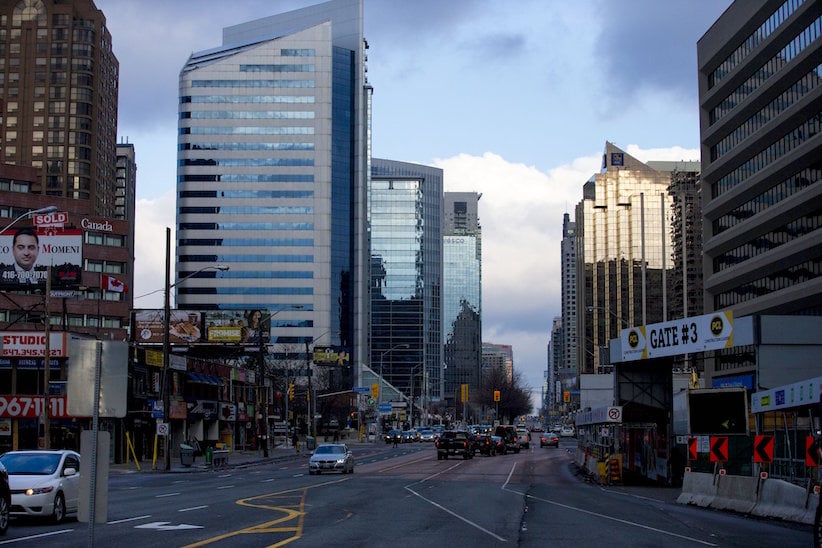 When the city rose up against Upper Canada’s British colonial government, Yonge Street was the hub of the revolt; Mackenzie’s Rebellion, which would go on to spur the British North America Act which created the Province of Canada, was fomented in a tavern owned by John Montgomery, who ran two pubs on Yonge alone. Indeed, when Toronto was seen as a tavern town in the 1800s, Yonge Street had the most of any street in Upper Canada, making it a destination for stagecoaches.

When Toronto became known for its folk-music scene in Yorkville, giving rise to names like Joni Mitchell and Bruce Cockburn, Yonge Street was right in the middle of the action; Steele’s Tavern, a rowdy dive bar on Yonge, became known as a music hotspot when it hired a then-unknown musician from Orillia, Ont., named Gordon Lightfoot. “It’s a mean street if you choose/It’s a lean street when you lose/An in-between street when you cruise on Yonge Street,” he would go on to sing in his 1998 song “On Yonge Street.”

And when Toronto wanted to be Toronto the Good, Yonge Street was the crowning symbol of then-mayor William Howland’s Victorian vision of a prim city built on religious morality, its department stores shuttering their windows to prevent sinful peeks in. Then, when all that fell apart, Yonge Street became the neon-lit nexus of the obverse: a stretch of sin and filth, occupied by peep-show booths, strip clubs, and body-rub parlours. It was all in the name of keeping Yonge fresh. After all, Yonge was always a hub of innovation; it’s where Toronto’s first subway system, first theatre to show a motion picture, first shopping mall and first cocktail bar were located. “In the face of urban growth and suburban competition, one of the ways [Yonge] stayed relevant was by adapting to the times,” writes Spacing’s Daniel Ross. “In the 1920s that meant movie houses and Vaudeville; post-1945 it was cocktail lounges with jazz combos, slowly giving way to taverns serving draft beer and a growing rock and folk scene. From that perspective, the shift towards selling sex was really nothing new.”

And now, as Toronto seeks to be seen as a world-class city, Yonge is a street worth strutting about. According to the most recent data, Yonge’s downtown stretch—between Steeles Avenue and Queens Quay Road—sees an average of 19,133 cars and 8,480 people during peak hours, making it a barometer of its status as a place to be. And as communities of new Canadians move in, they find their homes along the road and make the street more kaleidoscopic, from the Korean restaurants near Finch to the Chinese and Iranian neighbourhoods further north along the corridor. There’s even been enough development in recent decades to give birth to a second downtown on the same street, this one around North York Centre—the locus of this week’s horrible attack.

But if Yonge Street is the city’s mirror, it bears all of Toronto’s scars and warts, too. In the late 1800s, St. John’s Ward—a notorious slum bordered on one side by Yonge—was a grim home for the city’s poorest and its immigrants. “Are you sad when you look down city lanes,” wrote Group of Seven painter Lawren Harris in his poem, “A Question”: “Lanes littered with ashes, boxes, cans, old rags; dirty, musty, garbage-reeking lanes behind the soot-dripped backs of blunt houses, sour yards and slack-sagging fences?” But while it became an important cultural space, serving as a bustling home for the Chinese, Jewish, Italian, Irish and African immigrants who would build the diverse neighbourhoods like Chinatown and Kensington Market that Toronto crows about today, the city saw it merely as desirable real estate, expropriating the community with wrecking balls in the 1900s.

In the 1910s, when Toronto wanted to be a pro-British city governed by Protestant principles, the city became a tinderbox, with Yonge as its open gas leak. Veterans forced by injury to return to Canada from fighting in World War One found a city they didn’t recognize, mislaying their resentment about how they were being treated by their home government; all the while, new immigrants came from countries like Greece, whose government hadn’t taken a side in what Maclean’s first dubbed “the Great War,” preventing these Greek-Canadians from fighting for their new country. By August 1918, Yonge—between Carleton and Dundas streets—became loaded with restaurants run by Greek migrants, seen as “slackers” by veterans blinded by their pro-Britain, pro-war sentiment. And so when an allegedly aggressive veteran was asked to leave the Greek-owned White City Café one hot summer day, the match was struck; tens of thousands of people—numbers fuelled by a national convention for veterans—took to Yonge in a frenzy of anti-immigrant sentiment to loot and destroy the businesses of Greek Canadians. It was the largest riot in the city’s history, and one of the largest anti-Greek riots in the world.

And in 1977, a 12-year-old shoeshine boy named Emanuel Jaques was raped and killed on Yonge, devastating Toronto’s growing community of Portuguese immigrants and prompting a crackdown that would largely clean up that notorious strip. It also arguably led to the later raids against nearby gay bathhouses for which the city only recently apologized and which continue to define today’s skirmishes over whether police can join in the Pride Parade—which takes place on Yonge, of course.

But in its own way, Yonge may be Ontario’s most Canadian street: in stretching from the small, service-oriented communities where sign companies are run out of brick houses, to a downtown whose big-city ambitions are refracted in glass and steel; in constantly evolving to reflect the many things the city represents, it captures so much more than Simcoe’s vision of a thoroughfare connecting two Great Lakes. In Yonge Street’s breadth, warts and all, is some kernel of the Canadian experience.

So it’s only appropriate that now, as politicians insist that unity will bring us together in this time of tragedy, Yonge Street finds a way to stitch us together once again. Just north of Lane’s Jackflashsigns, Yonge Street appears to terminate at an eerie dead end, but it actually continues four kilometres north, as a shard of country road that ends for good at the fields of Queensville’s Goodyear Farm, specializing in what a receptionist describes as “Oriental vegetables”—bok choy, choy sum, and the like. And almost 70 kilometres south, on the edge of the lake that Simcoe sought, is a condo, fronted by a whimsical bronze statue of an immigrant couple, suitcases and baby in tow. On that same spot, decades ago, the in-laws of the man who would go on to helm the condo project arrived in Toronto from Hungary after the Holocaust, with hope in their eyes for their future up the street.