Canada and America may argue over who was the first to hold a harvest festival, but both countries' approaches to the national holiday are similar 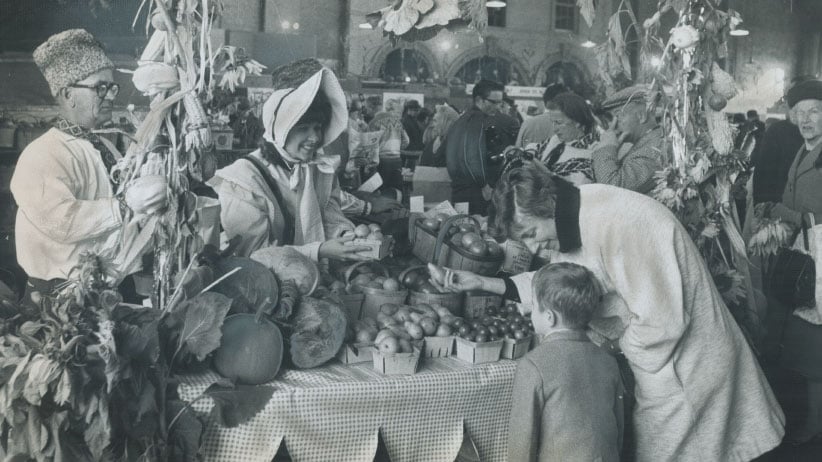 This time last year, the New York Times—and its many readers—discovered a quaint little tradition that many Americans had never heard of: Canadian Thanksgiving.

Some of the confusion over our version of the holiday stems from the fact that we celebrate it six weeks earlier than they do—and on their Columbus Day holiday, to boot. Most of it, however, is surely owing to the fact that Americans feel ownership over this holiday, believing it grew, organically, out of a specific historical event that took place on “American” soil. After all, the Plymouth Rock story, which frames a congenial harvest feast shared by Wampanoag peoples and the Pilgrim settlers in November 1621 as America’s first Thanksgiving, is taught early and often.

In response, on occasion, some defensive writers and apologists have countered the implication that we are pale imitators of the U.S. or mere holiday rip-off artists, and people have pointed to Canadian antecedents to demonstrate our authentic connection. Some cite a celebratory meal held by Martin Frobisher upon his arrival in 1578, but since that involved tinned beef and mushy peas, that feels like a stretch. More germane than this story is the meaty celebration hosted by Samuel de Champlain in Port-Royal on Nov. 14, 1606, which saw Europeans and Indigenous peoples breaking bread together. It was organized as part of the “Order of Good Cheer” dinner party series that was invented to make sure the colonists ate and drank enough to stave off scurvy and malnutrition.

It’s possible that the only reason any settlers even survived at all was owing to the help of the Mi’kmaq, who had taught them ice-fishing techniques and introduced them to a vital non-toxic berry rich in vitamin C. In return, the French colonists invited some Mi’kmaq men to the November 14 celebration, which included not just food and drink, but also musket-firing and the first European play ever performed in North America, Marc Lescarbot’s Théâtre de Neptune. The plot was simple: The God of Neptune congratulated the explorers on their sailing prowess—and then the Indigenous people swore total allegiance to the newcomers, acknowledging the sovereignty of the Europeans.

Things didn’t get any better after that. Smallpox plagues, Christian conversions and treaty violations followed, as did an all-out war over Halifax, which the Mi’kmaq had never ceded to Europeans. Governor Edward Cornwallis responded to this land claim by offering a bounty for scalps, which is one reason his controversial statue, erected in Halifax in 1931, was shrouded this summer amidst calls for it be removed.

Why you would want this particular story to be the foundation of a national holiday is mystifying, especially since the modern version of Canadian Thanksgiving in no way grew out of that early dinner theatre incident. Thanksgiving didn’t really take hold in Canada until the 19th century, which, surprisingly, is also when it became a popular tradition in the United States. For about 250 years after the mythical Plymouth Rock event—a controversial story that some argue should be marked as a day of mourning since, among other things, the new settlement was on the site of a region decimated by plague brought on by European contact—Thanksgiving was a minor, loose, regional tradition that was celebrated on whatever day local authorities picked, in the states where anyone even bothered with it at all (New England, mainly).

It might never have franchised out and come to take on such cultural significance if it weren’t for Sarah Josepha Hale, editor of Godey’s Lady’s Book, a women’s magazine that promoted abolition, white wedding dresses, Christmas trees, a focus on the family, domestic science and the elevation of Thanksgiving to a national holiday with a set, universal date, so that the entire nation could pray and celebrate together. In Hale’s 1827 novel, Northwood, the characters debate the future of Thanksgiving, with one articulating its political significance: “We want it as the exponent of our Republican institutions, which are based on the acknowledgment that God is our Lord, and that, as a nation, we derive our privileges and blessings from Him.”

Towards the end of the Civil War, Abraham Lincoln and William H. Seward, then the secretary of state, were finally swayed by Hale’s arguments and declared a national day of Thanksgiving, which they hoped would help heal factions, unite the country, and establish the northeast as the moral compass and leader of the country. The mythological Plymouth Rock story, which emphasizes manifest destiny, hard work, community and the value of local institutions, was eventually attached to the nation-building holiday.

Meanwhile, politicians and businessmen in Upper Canada and other colonies had similar problems to the kind Seward and Lincoln had faced, since nation-building was on the agenda for those trying to push Confederation. Although the scheme was essentially a free-trade pact, Canada needed an identity, and the prevailing concept was a white Protestant nation that would marginalize the claims of Indigenous peoples and other immigrants from Asia and Europe. In the 1860s, “Canada First,” an organization that promoted that vision of Canadian identity and called for cultural institutions like Thanksgiving to support a white Protestant Canada that celebrated farm, family and religious devotion, was established. And in 1865, for example, the Globe and Mail ran an editorial calling for prayers to thank “Divine Providence” for the “special favours vouchsafed to our country during the past season,” which included a good harvest and the end of a decade of economic turmoil. It also called for a standardization of services across the country to give it a more “national character,” so that the impact of the prayers could be greater. The country that prays together, after all, stays together.

In his paper, “‘Righteousness Exalteth the Nation’: Religion, Nationalism, and Thanksgiving Day in Ontario, 1859-1914,” historian Peter Stevens says that in Ontario, sermons for Canadian Thanksgiving—the date of which shifted until it was decided around the turn of the last century that outdoor sports should be part of the festivities, and November was too cold—sermons often focused on Canada’s moral superiority to the United States. Since religious leaders believed that Canada never had slavery (it did, of course, which Stevens points out), they argued that Canada was the real chosen land; the U.S., after all, had recently been punished for its slaveholding past with a devastating civil war.

With great blessings come great responsibilities, though, and one of the most important of these was spreading Christianity to the Indigenous, which was the subject of an 1885 Thanksgiving sermon delivered in Winnipeg by Rev. Charles Bruce Pitblado. Inspired by the recent North-West Rebellion and the execution of Louis Riel, he thanked God for the victories but argued that the work of “reconstructing society” would involve a shift that made dealing with the “Indians” as “recognized settlers” imperative. The country’s future “peace and prosperity” relied on a national resolve to “Christianize and civilize the Indian”—in other words, cultural genocide through residential schools.

This new paternalistic, assimilationist phase in settler-Indigenous relations wasn’t entirely without criticism, demonstrated by an 1890 feature in the Globe and Mail lamenting the slow death of the seven-day ritual of Thanksgiving feasts central to the Haudenosaunee culture, which was waning as a result of the increasing numbers of “Christianized Indians” who no longer took part in these “pagan” customs. That writer observed that these Thanksgiving feasts, which involved religious observance, visiting each other’s houses, feasting and war dances, had been in existence from the time the Haudenosaunee Confederacy was first organized—a vague reference at the time that is still the subject of some debate, but thought to pre-date the Frobisher exploration by at least a century.

This, of course, alludes to the thing that so many people seem willfully blind to in the debate about who had Thanksgiving-style gatherings first: that they were well-established long before Europeans ever got here. Specific rituals differ from region to region, of course, but festivals that saw people expressing thanks for the bounty of the land are a common feature of most pre-contact societies in Canada and the United States.

This may be starting to sound like an argument for the abolition of Thanksgiving, given that it is textbook cultural appropriation, one that’s been repeatedly used as a tool to promote political ideals, often tied to ideas of racial and cultural superiority. The flip side of Thanksgiving’s shaky foundation, though, is that, in its modern form, it’s an invented tradition—like all holidays, really—that’s been tied to all manner of mythical stories to promote whatever vision of national or cultural identity needed at the time. That means it can be re-invented again to mean what we need it to mean now.

Since the United States has thoroughly taken ownership of it as a founding myth for its nation-building project, to the point that it’s practically eclipsed Canadian Thanksgiving, we could make the holiday our own by using it in a totally different way. A good start would be to acknowledge that Europe had pre-contact harvest feast traditions of their own, but to stop pretending Europeans invented Thanksgiving in Canada or the United States and, instead, consider how to repurpose the holiday to redress historical wrongs—and imagine a new Canadian identity.