The outliers of Canadian media

Christina Gonzales: The reporting of Trudeau's blackface shed light on one of Canada’s biggest diversity challenges—there aren’t enough people of colour in journalism 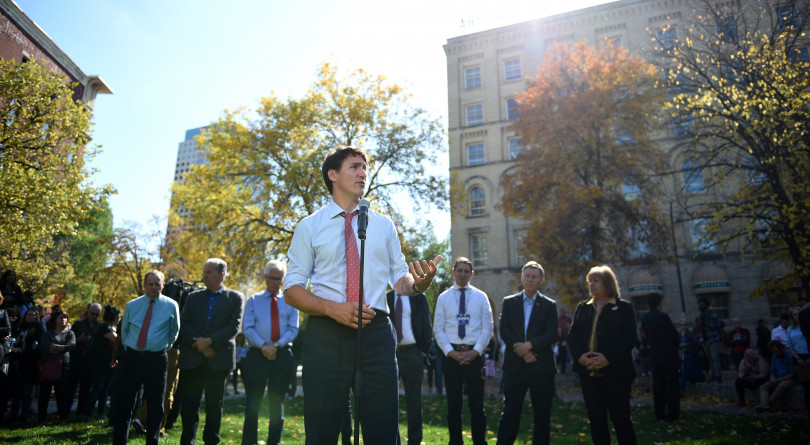 Trudeau addresses the media about the 2001 photos of him in brownface, in Winnipeg on Sept. 19, 2019 (Sean Kilpatrick/CP)

Last week, after the trifecta of images were released of Trudeau in blackface and brownface, a group of journalists of colour—Tanya Talaga, Manisha Krishnan and Anita Li—discussed the lack of diversity in Canadian newsrooms on CBC’s The Current.

Due to the lack of visible-minority voices reporting on Trudeau’s blackface, they all agreed, the story, which was really about systemic racism in Canada, was reduced to plain outrage. Rather than giving readers the context they needed to understand the prejudices that people of colour have faced historically and continue to face now, what the public got instead, was a political spin on Trudeau’s actions.

In other words, How would Trudeau’s blackface affect him in the upcoming election?

For Krishnan, a senior writer for Vice, the questions directed to Trudeau at the media scrum post-blackface were the most frustrating. “There was really no one asking him, ‘Okay, you didn’t think it was racist, what were you thinking? Walk us through your thought process. Why would you think this was an appropriate thing to do?’” she said.

It’s largely about how the Canadian media covers race, Li added, explaining that one of the reasons she relocated stateside was because U.S. media has more of a willingness to publish stories that unpack the nuances of race. It is part lived experience, and part education, she explained.

The stats on newsroom diversity are grossly out-dated, and uncomfortable to examine: In 2006, only 3.4 per cent of people in newsrooms were people of colour. The fact that there’s been no concerted effort to publish current statistics on diversity trends in media signals an even greater concern—while newsroom diversity is abysmal, we’re idle, and simply too embarrassed to address it.

So what does it take for a person of colour, from an under-privileged home, to make it into a national newsroom? A lot. It’s a combination of both what you did and where you were—personal motivation and external circumstances. The handful—if that—of coloured faces in each newsroom you see are outliers. Don’t believe anyone who tells you otherwise.

I grew up in Thorncliffe Park, an area in Toronto’s East York, wedged between the Danforth and the more wealthy Leaside neighbourhood. Thorncliffe Park is a cul-de-sac of apartment buildings where, in the early 90s, an influx of Filipino immigrants settled. My cousins lived in the buildings across from me. Our church—St. Edith Stein—was majority Filipino. My dad and my uncles sat inside East York Town Centre on Saturday mornings, sipping coffee and telling stories in Tagalog.

The cul-de-sac was split in half: if you lived on one side, you attended school on the Danforth, if you lived on the other, you went to school in Leaside. Our building fed into Leaside. At St. Anselm, the student population was about 40 per cent Filipino, 60 per cent white.

There, I was schooled on the opportunities afforded to white people. My white classmates, most of whom had fathers who were doctors, lawyers, business owners and mothers who stayed at home, operated with a sense of unconscious certainty. Their upbringings provided them a firm sense of place in Canadian society. This even trickled into the way teachers and parents addressed the kids—you were either a “Leasider,” or not.

I’m no Malcolm Gladwell, but I don’t think it’s unreasonable to assume that—for a child who is 10 years old—having an awareness of economic opportunity by way of your parents correlates with job success later in life. And that’s the inherent advantage white people have in journalism. It’s a career that’s foreseeable in their worldview. Meanwhile, journalism for first-generation immigrant children is like one of those secrets you want to keep from your parents; it’s not part of the conversation at home, nor do you want to bring it up.

It was during my time at St. Anselm that I became acquainted with the term “white-washed”—people of colour who speak, dress and act like they’re white. I first recall my own intuitive white-washing when I spent the time in the homes of friends in Leaside. Inside their carefully decorated houses, I did everything not to highlight how I was different, and instead sought to prove that I was just like them.

The white-washing I subjected myself to as a child, is akin to the way in which I operated at the start of my career in media—showcasing my degrees rather than my personal perspective, listing off my bylines rather than the subject matter I’m passionate about (one being immigrant issues), and dumbing down the core reason why we need more people like me in journalism: If I don’t give the 850,000 Filipinos across Canada—the third-largest Asian-Canadian group in the country—a voice, who will?

In June, CBC and Radio-Canada’s broadcasting division announced a new commitment to diversity across their broadcasting arm. By 2025, they wrote in a press release, the company aims to have at least one key creative—producer, director, showrunner and lead performer—from a diverse background in all its programs. I’d argue that more must be done to radicalize diversity targets across all media.

This starts with having internship programs where at least 50 per cent of interns are people of colour. When it comes to securing a full-time gig in journalism, landing an entry-level role like an internship, is the first of many barriers to entry. By diversifying these jobs, we can ensure an ongoing funnel of young, visible-minority journalists making their way into national newsrooms.

Another idea is to have at least one key decision-making position at large news organizations be filled by a person of colour—and ideally, they’d have hiring authority. It’s one way to tackle what we know as the ‘similarity bias,’ which in the case of journalism and media, is the revolving door of white reporters hired by a majority-white management.

At Maclean’s, while our writers come from a number of backgrounds, the number of ethnic minorities on staff falls below 19.1 per cent, the percentage of people in Canada who identify as a member of a visible minority group, according to Statistics Canada. So instead of hiding from stats, shouldn’t we give these numbers a hard look and ask ourselves: Is Canada truly represented here?