'Dumped by Trump' a badge of honour in Vancouver 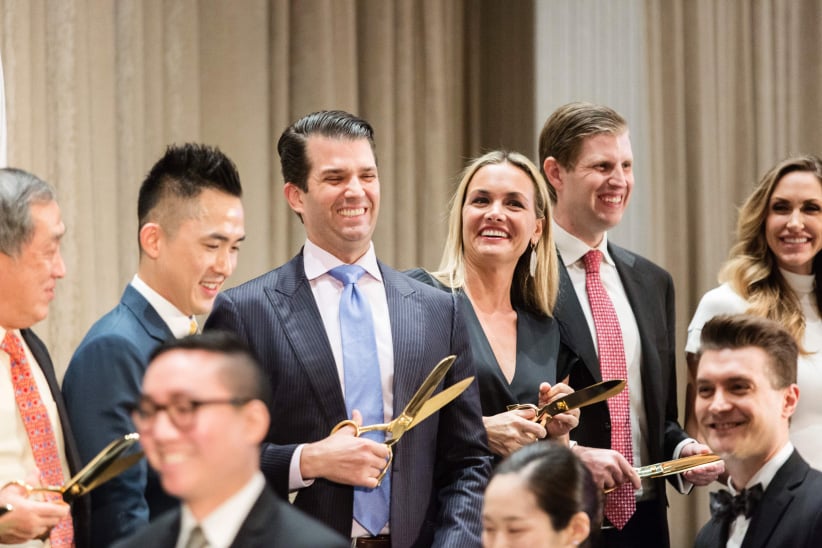 A few years ago, Vancouver city councillor Kerry Jang was asked to welcome Donald Trump, then just another developer looking to get in on the city’s real estate action, and his eldest children, Ivanka and Don Jr., to the city. The Trump hotel’s developer, Holborn Group CEO Joo Kim Tiah invited him, he says. The Trumps were in B.C. to announce plans for the 63-storey Trump International Hotel and Tower, which opened on Tuesday amid protests. But Jang, who is Chinese-Canadian, says he got the hook at the last minute. Coun. Geoff Meggs, the Ontario-born son of an Anglican priest, greeted the Trump family in 2013.

Jang says he’s thankful he got dumped. “The Trump name is synonymous with sexism, bigotry and bullying,” he says, calling the new tower a “blight on the city” (Tiah did not respond to requests for an interview; a spokeswoman for the Holborn Group had not provided comment to Maclean’s when this story was posted). And the soaring, twisting structure has got “terrible feng shui,” Jang adds, bursting into laughter: “I wouldn’t go near the place.” Neither, evidently, would Vancouver’s entire city council nor Mayor Gregor Robertson, who in 2015 asked for the tower to be renamed: all boycotted the morning’s ribbon-cutting in Coal Harbour, where Don Jr. and Trump’s second son, Eric, were honoured guests.

RELATED: The election-night scene at Trump Tower in New York

“Money,” Trump once said, “is a bit like a scorecard,” and even the men’s store in his new hotel’s lobby reeks of the cartoonish opulence the world has come to associate with him. A boy’s ostrich-leather jacket is priced at $14,000 before tax. Crocodile skin shoes come in at $6,600. Kids’ runners start at $930. Even the store’s mannequins seem to say: “Part of the beauty of me is that I am very rich”—something else Trump once told an interviewer. Instead of human heads, the mannequins have bronzed, eagle heads. Their beady eyes seem to hunt shoppers, like prey.

Don’t let the shellacked concrete floors of the gym next door fool you. The club is just as exclusive and expensive, as the refrigerated, eucalyptus-scented towels suggest (in another Trumpian touch, the website offered a promotion Tuesday—150 bucks off the $300 initiation fee).

Meantime, hundreds of colourful, placard-waving protestors had gathered outside to sing “love trumps hate.” A row of security guards wearing badges identifying each as a Trump “associate” looked on from behind a temporary, metal fence. Chrome letters spelling T-R-U-M-P hung above their heads, each of them festooned with razor wire (a comment on the proprietor’s border policies?).

The protest was mostly peaceful, but four men, one wearing a red, “Make Canada Great Again” hat, had come to argue with the demonstrators. “Have you never been to Saudi Arabia?” one asked rhetorically, adding: “None of you has ever defended a woman in your life.”

Jang is urging tourists visiting Vancouver to steer clear of the circus entirely. “As a city, we pride ourselves in diversity and inclusiveness,” he says, noting that fully 48 per cent of Vancouverites are foreign-born. “The Trump tower is not us. For an authentic Vancouver experience, go anywhere else.”