Mitch McConnell is fending off the upstarts 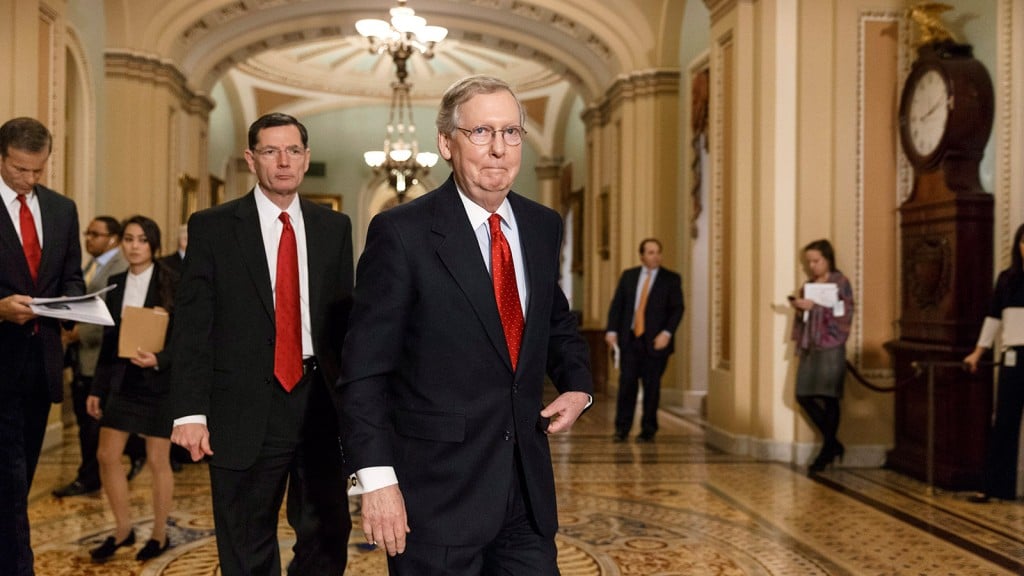 At age 72, U.S. Sen. Mitch McConnell of Kentucky, who survived polio as a child, may look frail. But the minority leader in the Senate, and arguably the most powerful Republican in America, has rushed head-first into a bloody battle against big-money conservative groups that have been bankrolling the Tea Party movement. More specifically, he has vowed to “crush them.”

To be fair, they started it.

National groups such as the Senate Conservatives Fund and FreedomWorks are propping up a little-known Tea Party challenger to McConnell in Kentucky’s primary election on May 20. The winner will be the Republican candidate in November’s congressional election—just when the party sees its best chance in years of taking majority control of the U.S. Senate, potentially making McConnell the majority leader.

National conservative activist groups are pouring money into McConnell’s ouster—which would shake up the Republican establishment. “If he loses in the primary, that would be a huge shot in the arm to the Tea Party. It would just be enormous. This would have ripples throughout the political system as more Republicans get worried about Tea Party challengers,” said Elaine Kamarck, a senior fellow at the Brookings Institution, a Washington think tank studying primary contests unfolding this spring and summer around the U.S.

Early polling shows McConnell with a lead—but primary votes are tricky to predict because they draw low voter turnout and are dominated by party activists. McConnell isn’t helped by his dour, charisma-free persona. “He’s too damn serious for a lot of Kentuckians, too urban, and has never been the cup of tea for about 30 per cent of the people in this state,” says Al Cross, a long-time Kentucky political reporter, now a journalism professor at the University of Kentucky.

Yet McConnell has vowed not only to win his race—but to roll back the fundraising groups nationally. “I think we are going to crush them everywhere,” McConnell told the New York Times this month. “I don’t think they are going to have a single nominee anywhere in the country.”

Republican leaders, who once viewed the Tea Party as a source of grassroots enthusiasm, now fear its influence—and their eagerness for tactics such as last fall’s government shutdown that hurt Republicans in the polls. “McConnell and his allies see the Tea Party as a dangerous influence pushing the party so far the to the right that it could never elect another president,” says Cross, who predicts that a defeat of McConnell would be a “five-millimeter artillery shell to the heart of the Republican Party. It would blow it up.”

The attacks from McConnell’s right are in some ways bewildering. In his nearly three decades in the Senate—including the last eight as leader, he’s been one of the most conservative Republicans in the U.S. Senate. He has voted the party line 91 per cent of the time. He has been pro-death penalty, pro-oil, earned an “A” rating from the National Riﬂe Association, and opposed abortion rights 100 per cent of the time. He spearheaded the successful constitutional challenge against campaign finance and paved the way for the rise of billionaire-funded political groups known as super PACs.

While in many ways a leader in the efforts to obstruct the White House’s agenda since Obama took office, McConnell also occasionally facilitated compromises to keep the economy and the government functioning. This is fodder for his challenger, a 47-year-old businessman named Matt Bevin. “I’m tired of seeing McConnell talk a big conservative game, but then constantly work to undermine conservatives when it really counts,” says Bevin, who faults McConnell for enabling the bailout of financial institutions during the 2008 crisis, and for a deal to raise the ceiling on federal government borrowing early this year.

“McConnell has tried to be the adult in the room who lobs some ideological rhetoric at his opponents but then cuts a deal to keep government going,” said Steven Voss, a political science professor at the University of Kentucky.

Bevin is an investment manager and president of a family-owned company, Bevin Bros., that manufactures bells—from cowbells to those used by Salvation Army Santas (campaign motto: “Let freedom ring.”) A father of nine, Bevin styles himself as a “job creator” taking on “elite politicians.”

It comes at a tense moment for Republicans. They need to pick up six net seats to take over the Senate. Twelve of their senators are up for re-election in November and half face conservative primary challengers.

Such primary challenges have been roiling Republicans since the rise of the Tea Party in 2010 helped them sweep to a majority of the House of Representatives. “It’s a major cause of polarization in Congress. They don’t want to do anything that would make the Tea Party say they are insufficiently conservative,” said Kamarck.

In 2012, Republicans watched in horror as Tea Party candidates beat incumbents—and then lost seats to Democrats. For example, long-time Indiana senator Dick Lugar was ousted in a 2012 primary by Tea Party-backed candidate Richard Mourdock, who then went on to lose the long-time Republican seat to a Democrat in the general election after defending his uncompromising stance against abortion by explaining that even pregnancies that arose from rape were intended by God.

So how does McConnell plan to stop the wave? First, McConnell has a lot more cash in campaign coffers: $10.8 million to Bevin’s $523,000. But the national groups are pouring money into the race, helping to level the playing field. The biggest campaign ad spending of any TV market in the U.S. has been in Louisville: $1.2 million so far, according to Bloomberg News.

After the Senate Conservatives Fund ran an ad attacking McConnell’s role in the debt-ceiling increase, McConnell lashed back, calling the group “schoolyard bullies” and told a fundraiser crowd that he’d like to “punch them in the nose.” McConnell then ran his own ad attacking the group of using donor money to pay for a luxury townhouse with a wine cellar and hot tub. Other conservative groups like FreedomWorks and the Madison Fund have opened anti-McConnell ﬁeld ofﬁces in Kentucky. Last week, the national Tea Party Patriots Citizens Fund endorsed Bevin.

But this time around, corporate groups, fearful of economic instability, are backing the incumbent. “It’s going to show whether business interests and mainstream Republicans can fight back against the activist core of the party,” said Voss.

McConnell has been careful to attack national conservative groups, not local Tea Party activists. And he has one more strategy: he is aligning himself with fellow Kentucky senator and Tea Party darling Rand Paul, who has presidential aspirations. McConnell shrewdly hired a relation of Paul’s, Jesse Benton, as his campaign manager, and has opened doors to big donors. The marriage of convenience was exposed when Benton was recorded saying that he was “holdin’ my nose for two years” because working with McConnell “is going to be a big benefit to Rand in ’16.”

If he manages to fend off Bevin, McConnell will have to face Democratic candidate Alison Lundergan Grimes, a 35-year-old state politician, who enjoys a tiny lead in the polls. Grimes is cautious and untested. But national Democrats have embraced her; Bill Clinton has already been out to campaign. Democrats are hoping that if the primary battle doesn’t break McConnell, it will at least leave him bruised and limping into November.