The Interview: Author Peter Schweizer on the Clintons' wealth 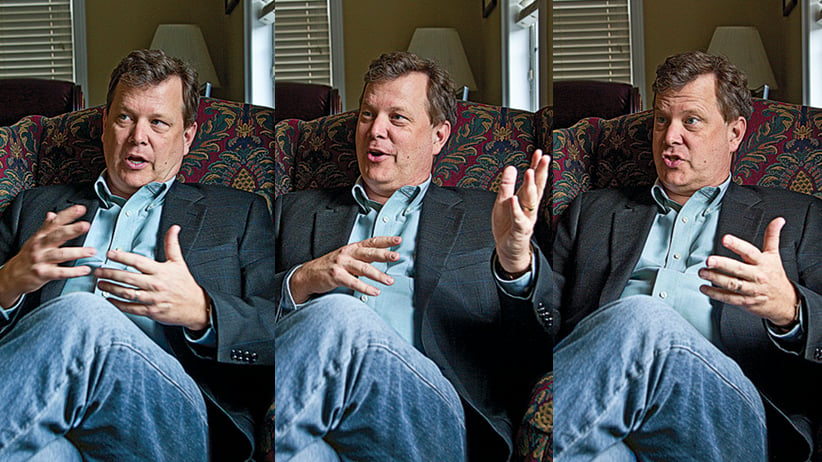 In Clinton Cash: The Untold Story of How and Why Foreign Governments and Businesses Helped Make Bill and Hillary Rich, Peter Schweizer chronicles troubling intersections between the financial practices of the Clinton Foundation, Bill Clinton’s speaking schedule, and Hillary Clinton’s political influence. Schweizer is a senior editor-at-large for Breitbart News and a former speech writer for George W. Bush.

Q: In the book, you pose the questions: “Do I simply have it in for Bill and Hillary?” and, “Am I somehow trying to derail her prospects of being elected president in 2016?” So, do you? Are you?

A: The answer is that, yes, I am a conservative, but my real research concern over the past decade has been to go after people on both sides of the aisle who’ve engaged in self-enrichment. It’s logical to look at the Clintons, because no ex-president and his family have accumulated so much wealth.

A: Yes, that’s a stunning figure, when you consider they spent their lives in public service.

Q: What patterns did you find involving Hillary’s political office, Bill’s speeches and the Clinton Foundation?

Q: The Clintons don’t take money directly from the foundation, a charity. How do they benefit financially?

A: Many of the speeches Bill Clinton now gives involve talking about the good work of the foundation. A significant portion of that ends up in his pocket, not the coffers of the Clinton Foundation. The foundation also serves as a useful vehicle for travels or transactions they are engaged in, in the developing world. Being able to show up on behalf of the charity is a very effective way to distract attention from the more commercial aspects of their visits. Finally, the foundation serves as an advertising agency for the Clintons.

Q: You say power within the relationship shifted to Hillary after she was elected to the Senate. Yet the foundation allowed Bill Clinton to amass more power and goodwill as an international influence-peddler than he had in the Oval Office.

A: As ex-president and head of the Clinton Foundation, you’re allowed to be a lot more fluid. You can go and meet with a dictator in Kazakhstan, and praise him as a leader committed to human rights and hope that flies under the radar. Bill Clinton views himself as the “convening authority,” the guy everyone goes to, who gets things done. If you’re an investor, or even a foreign government or a U.S. corporation, and have a problem in Nigeria or Colombia or Kazakhstan, Bill Clinton is the guy to call. He can make things happen in a way that’s shocking, for a former president who positions himself as concerned about human rights and international justice.

Q: Could you offer an example?

A: President Paul Kagame of Rwanda, who has been criticized by the UN and other bodies for human rights violations. When he comes to the Clinton Global Initiative, the handout lauds him as a military commander and he is presented with no warts.

Q: You connect Bill’s speaking fees with Hillary’s decisions as secretary of state. What examples stand out?

A: The Clintons are in a unique situation: He leaves office at a time when his wife is assuming official responsibilities. Most presidents, including Clinton, see speaking fees decline over time, as they become less relevant. But suddenly, when Hillary Clinton becomes secretary of state, his speaking fees, particularly in the Third World, jumped dramatically. Between 2001 and 2012, Bill Clinton gave 13 speeches, each of which paid $500,000 or more. Only two occurred while his wife was not secretary of state. And they came in places such as Nigeria, and for companies such as Ericsson of Sweden, which was having real problems with the U.S. State Department. Ericsson paid Bill Clinton to give a speech; they gave him his largest single payday: $750,000.

Q: Another pattern is how Hillary Clinton’s political positions reversed in ways that appeared to benefit the foundation.

Q: A recurring tension is between what is unethical versus what is illegal. You provide no proof of illegal activity. Yet you also outline how there was no impropriety in the fact that Hillary Clinton’s staff shared duties between the State Department and the Clinton Foundation.

A: The Clintons behave in a manner that makes it difficult to prove illegality occurred.

Q: The Clinton marriage is the subject of much speculation. What insights did you glean?

A: The notion that they are operating in parallel universes and that this is a marriage of convenience misses the fact that they are interacting numerous times a day. When it comes to political and commercial operations that involve both of them, they operate hand in glove.

Q: You call the Clintons “the most politically sophisticated public figures of their generation” and “masters” in blurring politics, not-for-profits, and business. Yet we’re obsessed with their sex life, or lack thereof, and are missing the more interesting tableaux.

A: Absolutely. They operate well, because they know how politics works. They know how business gets done in Nigeria. They know precisely, when they go to Kazakhstan and kiss the ring of the dictator, what opportunity that creates.

Q: There’s a lot of Canadian content in your book. A recurring character is Frank Giustra, the Vancouver-based natural-resources magnate and longtime FOB [Friend of Bill].

A: When Bill Clinton left the White House, he accumulated a collection of financiers who befriended [him], loaned him their planes, travelled with him. Frank Giustra is the latest iteration. It’s a mutually beneficial friendship. If you’re Frank Giustra and you’re doing business in Colombia or Kazakhstan, particularly in natural resources, these are areas where government and political involvement are essential. What Frank Giustra provides is the free flow of money, which is something that the Clintons never really had. They went into public service immediately out of law school.

A: We uncovered this donation by going through the Canada Revenue website. Those donations did not show up in Clinton Foundation disclosures. This is a complete violation of a written agreement the Clintons had with President [Barack] Obama. It now appears that there are more than 1,100 contributions that have gone through this Canadian entity. According to documents filed with the government, a sizable number of those contributions are from non-Canadians. The question becomes: Why have they [the Clintons] not disclosed those contributions?

Q: Did you see any involvement of Canadian governments with the Clinton Foundation?

A: I did not. I believe the Wall Street Journal reported that a Canadian government agency promoting the Keystone XL pipeline made a donation. But I’m very intrigued that a sizable portion of the mining industry in Canada seems to have struck up this partnership with the Clinton Foundation.

Q: The Clinton camp has refuted some of your claims. A page on HillaryClinton.com is devoted to “fact-checking” the book. On it, you’re described as a “Republican operative.” And, to be clear, you’ve made amendments.

A: There’s no disputing the fact that I am politically conservative. But, ultimately, the question here is about fact patterns. Before the book was released, I took it to the investigative units at the New York Times, Washington Post, ABC News and Fox News. They independently verified large portions of the book on important narratives. As to the book itself, there are seven or eight minor revisions made. The reader is either going to conclude the Clintons operate in a parallel universe that is just filled with amazing coincidences, or, like lots of politicians, they have recognized that official power is a means to self-enrichment, and they have done it on steroids in a way no other political figure has in modern American political history.

Q: You’ve had to hire security?

A: Yes, when I travel. The concern is not the Clintons, per se; the concern is crazy individuals. I’ll leave it at that.