The U.S. president is once again blaming the media for the anger infecting America. But his own record of public rhetoric suggests another source. 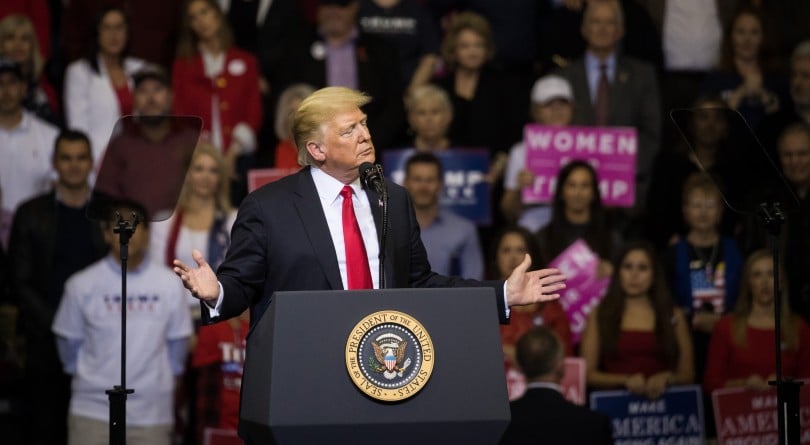 Donald Trump addresses the crowd during a rally in support of Sen. Ted Cruz on Oct. 22, 2018, at the Toyota Center in Houston, Texas. (Loren Elliott/Getty Images)

After at least eight pipe bombs were found on Wednesday addressed to prominent Democrats and opponents of Donald Trump, the U.S. president appeared, at least for a brief while, to act like a president.

“In these times we have to unify,” he declared. “We have to come together and send one very clear, strong, unmistakable message that acts or threats of political violence of any kind have no place in the United States of America.”

The recipients of the crude explosive devices, none of which detonated or harmed anyone, included two former presidents, Barack Obama and Bill Clinton, and a former CIA director, John Brennan. On Thursday morning, there was news of two more pipe bombs, addressed to former vice president Joe Biden and actor Robert De Niro (who had declared at an awards show earlier this year, ‘f–k Trump’).

Despite Trump’s call for unity, a few hours later at a rally in Wisconsin he seemed to be back to his old tricks, blaming his favourite target, the media (one of the pipe bombs was delivered to CNN’s New York office) for America’s troubles. “The media also has a responsibility to set a civil tone and stop the endless hostility and constant negative and oftentimes false attacks,” he said. And on Thursday morning the president was tweeting:

A very big part of the Anger we see today in our society is caused by the purposely false and inaccurate reporting of the Mainstream Media that I refer to as Fake News. It has gotten so bad and hateful that it is beyond description. Mainstream Media must clean up its act, FAST!

Certainly Trump has been the subject of more bad press than any other modern president—typically due to stories leaked by his own staffers and his own scandals. But there is no question that he has done much to fuel the atmosphere of anger that now infects U.S. politics.

In a radical departure from the norms of the office he holds, Trump has on many occasions openly encouraged or supported violence against his opponents, critics and media.

During the Iowa caucuses in Feb. 1, 2016, Trump told a crowd in Cedar Rapids that he would pay the legal fees of supporters who fought with protestors. “If you see somebody getting ready to throw a tomato, knock the crap out of them, would you? Seriously, okay? Just knock the hell … I promise you I will pay for the legal fees. I promise, I promise,” he said.

On Feb. 23, 2016, during a campaign rally in Las Vegas, Trump said of a heckler who was being ejected from the building, “He’s walking out with big high-fives, smiling, laughing. I’d like to punch him in the face, I’ll tell you.”

Less than two weeks later, Trump repeated his legal-fees promise to those taking a protester out of a rally in Warren, Mich., saying: “Get him out. Try not to hurt him. If you do, I’ll defend you in court, don’t worry about it.”

On March 11 and 12 of that year, Trump expanded on his apparent belief that violence against his critics is justified. At an appearance in St. Louis, he lamented at the delays due to security escorting protesters out of the building, saying, “Part of the reason it takes so long is nobody wants to hurt each other anymore, and they’re being politically correct the way they took them out. So it takes a little bit longer. And honestly, the protesters realize it, they realize there are no consequences to protesting anymore.” The next day, in Kansas City, he said that violent responses to protesters are “appropriate,” adding: “The audience hit back. That’s what we need a little more of.”

On Aug. 9, 2016 Trump stunned the world by hinting that gun-owners could take matters into their own hands if his rival Hillary Clinton were elected president: “If she gets to pick her judges, nothing you can do, folks,” he said, before hastily adding: “Although the Second Amendment people—maybe there is, I don’t know.”

And at one of his campaign-style rallies on Oct. 18, Trump seemed to revel in a Montana congressman’s assault on a reporter. “Any guy that can do a body slam, he is my type!” the president told a cheering audience in Missoula. Trump was referring to an incident last year when Rep. Greg Gianforte grabbed a reporter and threw him down during a special-election campaign event. Gianforte apologized at the time and wound up pleading guilty to assault, receiving a sentence of service, but was elected anyway.

Trump has also frequently referred to the media as the “enemy of the people”—a phrase that was used in Nazi Germany.

The FAKE NEWS media (failing @nytimes, @NBCNews, @ABC, @CBS, @CNN) is not my enemy, it is the enemy of the American People!

In July 2017, he tweeted a video that showed him at a 2007 WWE wrestling match, with a CNN logo superimposed on his opponent’s face.

At the time, White House press secretary Sarah Sander said that, “The president in no way form or fashion has ever promoted or encouraged violence. If anything, quite the contrary.” CNN replied in a statement: “It is a sad day when the President of the United States encourages violence against reporters. Clearly, Sarah Huckabee Sanders lied when she said the President had never done so.”

In August, a California man echoing the “enemy of the people” line was arrested after threatening violence against Boston Globe journalists.