Opinion: Amid the deals and shiny products, the tech industry has hurt social mobility and workers' rights—and yet politicians are too eager to prostrate themselves for these companies 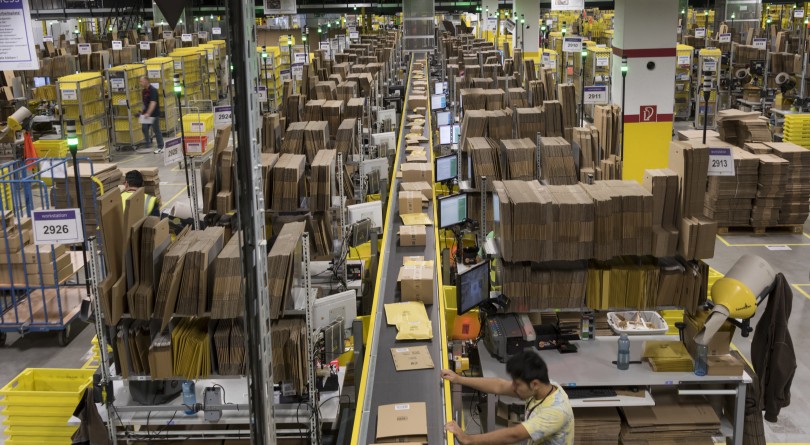 July the 16th was a big day for Amazon CEO Jeff Bezos. The elder statesman of the dot-com industry didn’t just achieve a personal record by having his net worth estimated at roughly $151 billion (all figures USD)—the most he’s ever been worth—he also set a new historic benchmark, higher than every billionaire whose wealth Forbes has been tracking since 1987. Meanwhile, Amazon’s annual Prime Day sale pushed the Seattle-based company’s stock price upwards with its frenzy of Black Friday-like deals for clunky kitchen supplies, tchotchkes you don’t really need, and devices that turn your home into a vehicle for vertical integration.

Meanwhile, as shipments of assorted gadgets and gewgaws go out to cities across North America, many of those same cities have locked themselves into Olympic-level bidding warfare for the right to be the home of Amazon’s second headquarters. With a promise of as many as 50,000 high-paying skilled jobs, Amazon has been dangling its prize for months since a shortlist of 20 cities—including Toronto, Canada’s lone candidate—was announced in January.

But since then—silence. And while cities have waited with bated breath for an announcement of the winning bid, it’s left plenty of time to debate the virtue of allowing Amazon to flex unilateral leverage over entire cities—much in the way they have, according to reports, managed to accomplish with their own warehouse employees.

READ MORE: Trump gets it partly right on Amazon—it does get a sweetheart postal deal

In the post-industrial era, inter-city bidding wars have become as acrimonious as they’ve become public. This trend more or less began with the wooing of automotive companies; a 1990s spat between Ohio and Michigan for a new $1.2-billion Jeep factory, which could have cost thousands of jobs if Chrysler pulled up stakes from Toledo, resulted in the city coughing up $232 million in incentives to win the bid.

Professional sports teams, too, regularly pit cities against each other in a race to steer public funds away from essential (albeit far less sexy) investments—infrastructure, education, health services—and toward fancy new stadiums. Economic development is always promised, rarely delivered, and sometimes followed in due order by a threat to abandon fans and move elsewhere if cities fail to further sweeten the pot.

But that all seems like pocket change, relatively speaking. When a company like Amazon announces a $5-billion headquarters, city leaders are quick to throw themselves prostrate in hopes of currying favour—and reports suggest they’ll even throw their constituents’ democratic interests into a sacrificial pyre. Gone are the times when cities offer the usual incrementalized tax breaks that usually follow, say, the construction of corporate offices. Some of the incentives arguably raise the question as to whether governments still operate in the public interest—or whether they’ve simply become a tool for companies to leverage.

Chicago, for example, offered to redirect $1.32 billion worth of the personal income taxes paid by the company’s workers back towards Amazon’s coffers. Rather than pay for the city’s crumbling infrastructure and cash-starved schools, workers would instead see a portion of their wages used to pay their bosses. New Jersey offered more than $5 billion worth of tax credits if Amazon chose Newark as its headquarters, as well as $1 billion in waived property taxes, and an additional $1 billion waived on wage taxes. And Maryland approved a bill offering Amazon the largest indulgence of all: an $8.5 billion package of combined tax exemptions and infrastructural incentives.

The name of Maryland’s bill, by the way, was the PRIME Act, named of course for Amazon’s Prime membership program. But the nomenclature of the obsequious backronym was somehow more embarrassing: Promoting ext-Raordinary Innovation in Maryland’s Economy.

Richard Florida, the urban studies guru and co-founder of The Atlantic’s digital publication CityLab, was alarmed enough by the exorbitant incentives offered by the shortlisted cities that he wrote an open letter—signed by a broad cross-section of almost 100 academics and policy experts—that appealed to elected officials among the shortlisted cities to support a “Non-Aggression Pact.” “This use of Amazon’s market power to extract incentives from local and state governments is rent-seeking and anticompetitive,” reads the petition. “It is in the public interest to resist such behaviour and not play into or enable it.”

READ MORE: Calgary hoped to land 50,000 Amazon jobs. It may have to settle for two.

And what is all this self-abasement for, anyway? After all, Amazon’s history of poor labour practices and bad treatment of its workers has been documented exhaustively for years. In 2011, workers at its Allentown, Pa., warehouse reported that working conditions had deteriorated to the point that the word “sweatshop” was, if anything, an understatement. “Imagine if it’s 98 degrees (Fahrenheit) outside and you’re in a warehouse with every single dock door closed,” said one former worker. The doors were left closed, he alleged, in order to prevent theft. “When the heat index exceeded 110, they’d give you voluntary time off,” said another. “If you wanted to go home, they’d send you home. But if you didn’t have a doctor’s note saying you couldn’t work in the heat, you’d get (disciplinary) points.”

Even as Bezos raced towards the sort of personal wealth that would have brought a blush to Croesus’s cheeks, Amazon’s employees across Europe were taking labour action. They alleged that, among other practices, Amazon has been exerting pressure to keep wages stagnant, and has imposed working conditions so poor that workers have even had to urinate in bottles to meet the fulfillment workload. And despite the many reports that Amazon’s business practices place the value of shipped goods above the health, safety, and dignity of its workforce, governments nonetheless salivate at the idea of being economically developed by a company whose interests seem to begin and end in its own boardrooms.

The destructive effects that the tech economy at large has waged on social mobility, in the industry’s Silicon Valley epicentre, has also been exhaustively documented. According to Antonio Garcia Martínez, WIRED contributor, former Facebook employee, and author of the exposé Chaos Monkeys, the industry has created an “informal caste system,” with easily replaceable workers making up the tenuous and easily-replaced Service Class, skilled technicians in the Outer Party keeping the system running, and the ultra-wealthy Inner Party of billionaires insulated at its core.

What Amazon is managing to accomplish with this never-ending pageant is to expand that caste system’s hegemony across North America, conscripting eager-to-be-reelected politicians into its Outer Class. Some of the incentives offered by non-shortlisted cities are flat-out being kept secret by civic leaders. When the interests of voters take a back seat to the interest of corporate appeasement, and industry giants are viewed less as community partners than capricious lords, we need to really stand back and examine the scope we’re dealing with here.

When Elon Musk declares unilateral wars on journalism, unions, non-discrimination in the workplace, and even a hero rescuer of the boys’ soccer team recently trapped in a Thai cave, that’s a problem with one petulant billionaire. When Peter Thiel co-opts Hulk Hogan’s defamation lawsuit to obliterate an entire media company, it is a problem with the power of the billionaire class to stifle free speech. But when Jeff Bezos can convert elected officials into a vassal class, we’re looking at a fundamental problem of democracy.

Silicon Valley tech giants—today’s iteration of the robber baron—have repeatedly shown that their final act of disruption is intended for the social contract. And it seems more than clear at this point that Amazon, at the very least, is less interested in business partnership with cities than sworn fealty. If politicians are this willing to debase the public office to win the company’s approval, then perhaps winning this farce of a sweepstakes ought to be good enough reason to vote them all out.

Because if we’re really going to sell our democracy to the corporate class this way, the least we could’ve gotten in return is a free Instant Pot.