Trans people cannot be erased. We have always existed, and will continue to live.

Opinion: A trans poet on what it means to defend an existence, as the U.S. government reportedly plans to define a person’s sex as a biological fact determined at birth 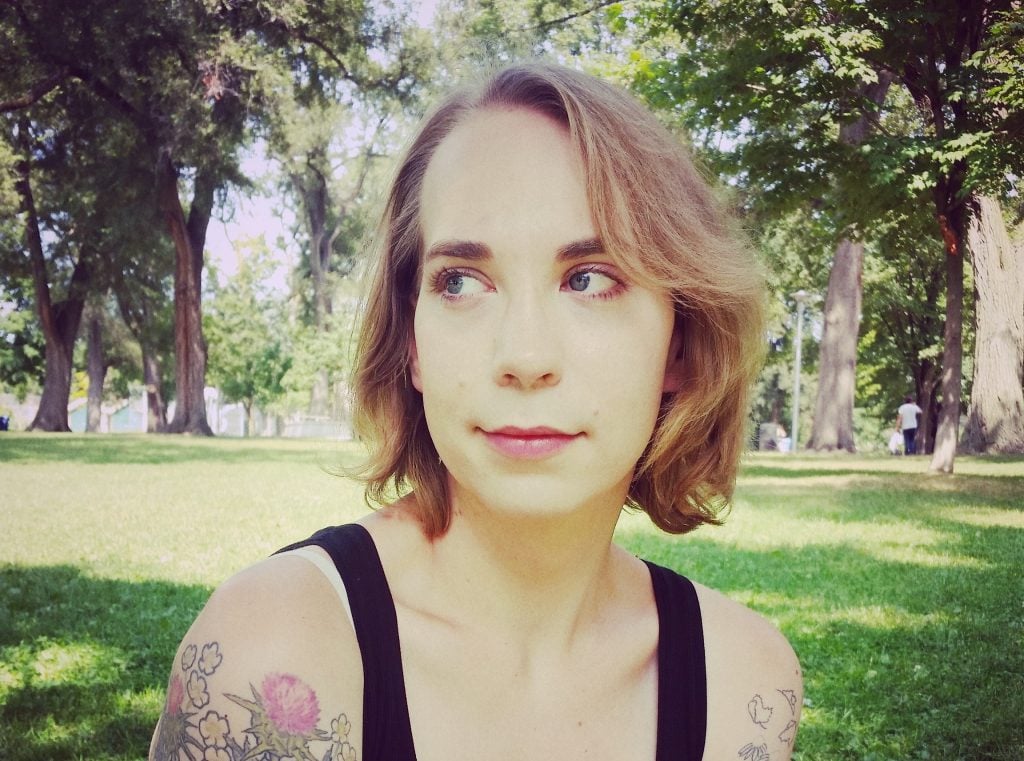 A portrait of the author. (Courtesy Gwen Benaway)

Gwen Benaway is a trans girl poet of Anishinaabe and Métis descent who has published three collections of poetry, including Holy Wild, which was released in September. Her fourth collection of poetry, Aperture, and a book of essays, trans girl in love, are forthcoming in 2020. She is a Ph.D student in the Women and Gender Studies Institute at the University of Toronto.

I heard about the news from America—that the U.S. government is considering changing gender designations to only reflect the sex assigned to an individual at birth—while working on a collaborative performance piece with five other trans women. We discussed it briefly in the living room of our AirBnB. It is a dangerous and cruel proposal which will ultimately end trans lives, either from violence when they are forcibly outed, or by the insurmountable barriers to healthcare, housing, and education that it will create. It will lead to the deaths of many of us, and I mourn this truth because it means that the most vulnerable trans lives will be the most impacted.

But all we could do was shrug to each other, because we didn’t know what else to say. After all, trans women—particularly trans women of colour—are used to living with the spectre of death and violence living overhead, and this proposal will intensify that existing reality.

So when Maclean’s asked me to write about the topic, I said yes. I could advocate for our humanity through my lived experiences as a trans woman, hoping that the empathy of my readers will cause them to change their minds or take some kind of action to support trans people in the world.

READ MORE: The power—and the violence—of being an Indigenous trans woman

I have defended our humanity before. I have written many essays about my life as a trans woman; I have given talks and readings across Canada in universities, bookstores, and theatres. I use my Twitter feed to regularly deconstruct transphobic thought. My advocacy for our right to exist as trans people and to access a basic level of equity in society has emerged alongside my literary and scholarly work—but it’s an unexpected side effect of being trans in the world. Simply by living, I’m an advocate.

I publicly advocate for our humanity because it’s essential for my life, but it is very dangerous to be a public and visibly trans woman. Every time I write or speak, transphobic attacks appear on social media or in person. I constantly have to be aware of my surroundings, and live in a heightened state of vigilance. Inside institutions, I have to speak back to transphobia and demand that my basic rights as a person are respected, even as other trans folks do this work too, writing detailed deconstructions of transphobic thought. I do this work daily, and it is tiring.

When I began my transition, I thought that education and awareness could gradually deconstruct transphobia. I assumed that most people were working through new concepts around gender, and would eventually become less transphobic. I was wrong.

The problem of transphobia has never been about ignorance or a lack of awareness; transphobia, which drives the U.S. government’s proposal, is not about being unaware of trans people’s humanity. Those who hate us are profoundly aware of our vulnerability in society, and seek to endanger our lives for a far darker reason than miseducation: the preservation of cisgender power and privilege.

Transphobia is always about power over trans people, about a need to control who we are and what we can do in the world. Gender is one of society’s most powerful forces, structuring our lives from the moment of birth. Trans people represent a threat to many cisgender people’s understanding of gender, which endangers their own sense of security and wellbeing.

Yes, some cisgender people work to learn and recognize that we are not dangerous, but a normal and valuable part of what it means to be human. But others, like the ones in Donald Trump’s administration, see us as a useful threat to split apart the LGBTQ community, to drive moderate voters towards far-right platforms, or to justify their rollbacks on women’s reproductive and sexual rights. This isn’t just a conversation about awareness anymore: it’s a dangerous recognition that trans people have become a wedge issue for some populist politicians to facilitate an increasing shift toward far-right and openly xenophobic white-supremacist politics.

Indeed, as far-right organizers become more emboldened to publicly attack marginalized communities, transphobic discourse in media, institutions and governments has also been uplifted to mainstream conversation. The two movements—far-right political organizations and trans-exclusionary activists—have a history of collaboration, and given how cruelly the current American administration has treated immigrants, refugees, and racialized peoples within its borders, it is hardly surprising that attacking trans people would used again to secure votes.

But trans people have lives. We are not just “identities,” as many claim we are, but people with friends, partners, and communities. We live as ourselves everyday. From my doctor to my partner to my professor, other people in my life understand and relate to me as a woman. My body is a woman’s body, fundamentally changed through hormone therapy and sexual reassignment surgery. Treating me as male simply because the letter “M” was written on my birth certificate ignores the reality and nuances of my life; my relationships, body, communities, and daily experiences as a woman for the last three years wouldn’t go away if my sex marker was changed to “M”.

Most people in the world greet me as “miss” or “madam,” gendering me as female without ever looking my government IDs. In fact, all daily aspects of my life would be unchanged, as my friends, coworkers, and partner would continue to see me for who I am.

Under the auspices of this change in America, my ability to safely access healthcare, education, public services, and participate in society would certainly be affected. But preventing us from changing our sex markers, stopping us from reflecting our lived genders in our documents, or forcing us to back to the sex marker assigned at birth will not make trans people stop existing. We have always existed, throughout human history, in every society. We will continue to exist and build meaningful lives connected to our communities. We will keep falling in love, and being loved in return. We will have jobs and we will have workplaces. We will need medical care and we will attend school. We will also continue to be trans, despite the danger and violence that surrounds us.

Because this is who we are.

As hateful ideologies are increasingly allowed to enter into public life, I look to the people around me for hope: my friends, peers, and lovers. Many of them are cisgender, but they recognize who I am and try to help in my struggle. I try to help them in their struggles as well, whatever they are. Together, we will continue to live and love in spite of violence, hate, and fear. We may not be successful in our work to improve the conditions of our lives and uplift our communities, but we will always resist and speak back to power.

Whatever governments decide, whatever politics of hate and violence become popular, and whatever obstacles arise, we will still have each other. As history shows us, you can’t legislate a people out of existence, though you can violently suppress their ability to live healthy and fulfilling lives—and even then, love finds a way through. I have lived a life built around that communal love and it sustains me, and I will continue to live—and die if required—in service to preserving and building it. Our capacity to love and be loved is one reality of trans life that no government can take away.

To quote my friend, trans writer Kai Cheng Thom: I hope we choose love, but I also know that even if we don’t, love continues. And despite all odds, it endures. I don’t want to have to write a defence of that love. I want us to continue living it.