People in the United States accept firearms and gunplay as essential, albeit occasionally regrettable, elements of what it means to be American. 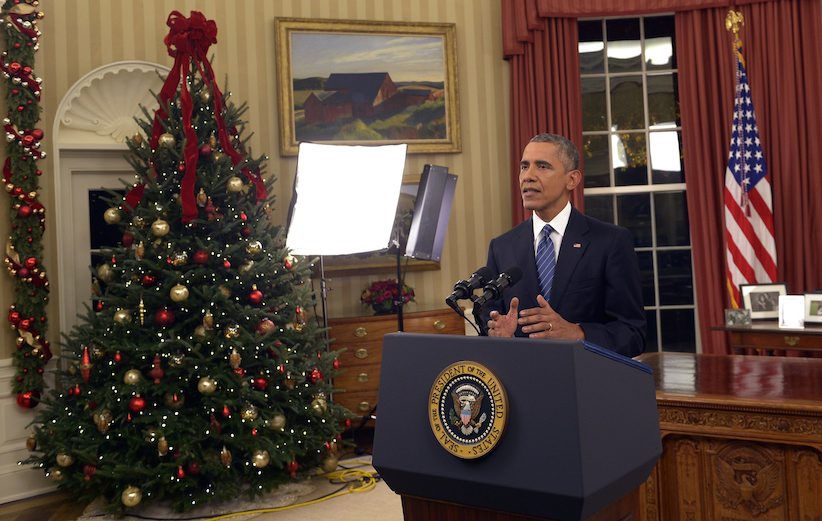 President Barack Obama speaks from the Oval Office at the White House in Washington on Dec. 6, 2016.  (Saul Loeb/Pool Photo via AP)

In ancient Athens, funerals were carefully choreographed rituals. The ceremony began with the prothesis, a procession of mourners chanting dirges to alert citizens. The epitaphios logos came next, a speech over the body, and according to Plato it followed a specific three-part structure: eulogizing the dead, giving kindly exhortation to the living, and offering consolation to the ancestors.

In modern America, mass killings are also carefully choreographed rituals. The “active shooter” situation is first broadcast live. In the oratory that follows, media eulogize the dead, then the pundits exhort the living to either ban guns or buy more. Politicians offer kindly tweets, beseeching God with “thoughts and prayers.” Finally, the president walks once again to the microphone to solemnly offer his consolation to survivors, promising that something will be done.

On Wednesday, in San Bernardino, Calif., a husband and wife went on a shooting spree armed with two .223-calibre semi-automatic rifles and two 9-mm semi-automatic pistols. They carried 1,600 rounds of ammunition; all of it purchased legally. When it was over, they had killed 14 people, and were themselves shot dead by police.

Transcript:  ‘The threat from terrorism is real, but we will overcome it.’

And so, the ritual began. Everyone played their role—until the President’s turn. Barack Obama announced that instead of a press conference, he would address the nation from the Oval Office. In America, this is akin to a sermon from Mount Olympus, and the President has only done it twice before.

There was talk he would break tradition, and hope that because he did not have to fight another election, he might offer a bold plan for gun control.

In his address to Americans, President Obama did break the ritual, but not in the way expected. Speaking from a lectern, looking a little grayer and a little older, the President chose instead to talk about terrorism. He promised Americans he would keep them safe from foreign attacks, by increasing intelligence gathering, sending more military forces to Syria, implementing more aggressive immigration screening, and reviewing the visa program.

Gun control was only mentioned in passing, as he called on Congress to pass a law preventing those on the “no-fly” list from purchasing a firearm, an idea Republicans have already rejected.

These measures would not prevented the San Bernardino massacre, as the perpetrators were not on the no-fly list. Nor would they have done anything to stop the other 294 mass shootings that occurred this year.

Americans have a complicated relationship with guns. Last year, the United States recorded the lowest level of gun ownership in 40 years. Only 32 per cent of households had a firearm, compared to more than 50 per cent in 1982. But the number of guns circulating has never been higher. And while more than half of Americans support some form of gun control, that is down from the three-quarters who did 25 years ago. And the often-vilified National Rifle Association, which takes advantage of every massacre to encourage more people to arm themselves in self-protection, has actually grown more popular in recent years.

It may be hard to understand, sitting in Toronto or London, but Americans simply don’t want gun control. They accept firearms and gunplay as essential, albeit occasionally regrettable, elements of what it means to be American. Not unlike the ancient Athenians, whose identify was defined in part by the bloody, and often unnecessary, wars with Sparta.

So the mass killings continue. Several more Americans will be shot before this day is over, and another massacre will be broadcast live before the week is done. The rites will be observed. There will be eulogies and exhortations and consolations, and then the bodies will be lowered into the ground. And to close the ceremony, the President will walk once again to the microphones, he will look a little grayer and a little older, and he will promise that something will be done. But that something will not include gun control. The ritual will go on.